Netizens Angry Over 9-YO Delhi Cantt Rape & Murder Case; Here’s Why You Should Too

A nine-year-old girl was allegedly raped and murdered and her body forcibly cremated by her attackers in the capital city of our country. Along with three others, the police have detained a priest for investigation.

The 9-year-old, who belonged to an economically backward family lived with her parents in Purana Nangal in the Delhi Cantonment area. She went to the crematorium last evening to fetch drinking water from the cooler for her family but never came back home.

Around 6 pm, some locals who knew the cremation ground priest Radheshyam, called her mother to the crematorium and showed her the body. They told the mother that their daughter was electrocuted while drinking water from cooler.

As per the sources, her mother shared how her body had burn marks on her wrist and elbow. Her lips were also blue. 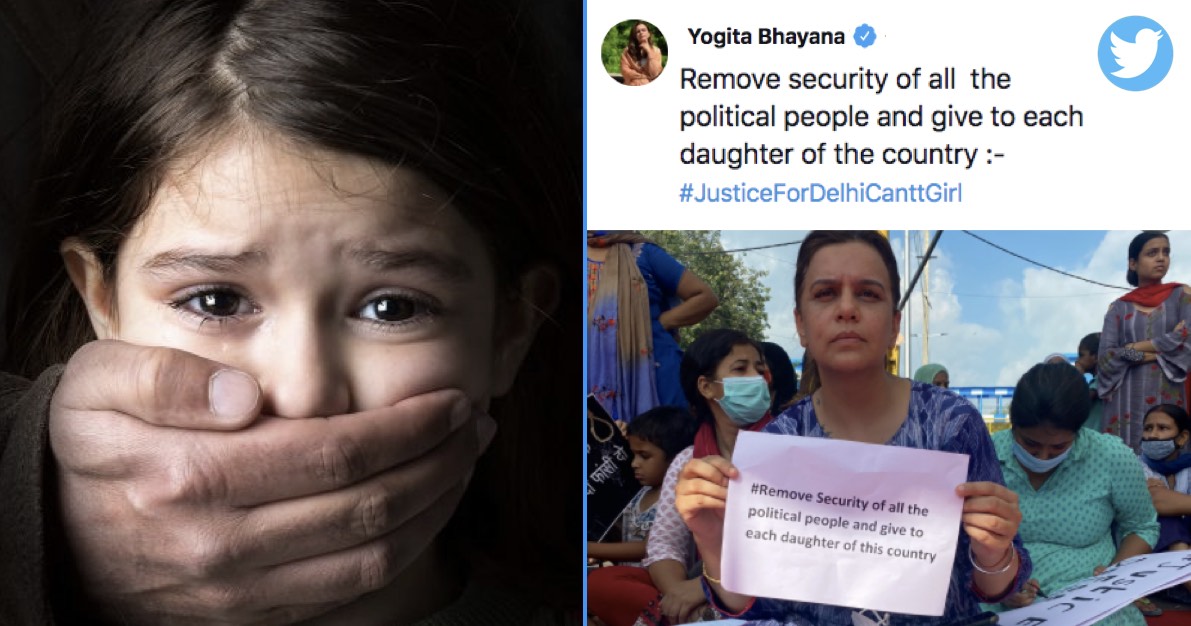 The priest & others influenced mother not to file case

The priest and his companions told the mother not to inform the police, because police would take their daughter’s body for post-mortem and, would steal her organs. They suggested her to cremate the body immediately. Later, the woman and her husband raised an alarm. Around 200 villagers of old Nangal village gathered at the crematorium and the police was informed.

While the police have detained the priest along with three others, the investigation is still on. The locals are holding a protest in the area demanding justice. There are many, who are pouring their heart out on internet.

Read that a 9 year old girl has been raped and burnt alive in Delhi by 4 men, one being a priest. Cant even think of the pain that girl must have been through! When are we going to change? The state of safety for children, women in our country is so bad. Prayers for the family.

My god, this is truly one of the most horrific crimes I’ve heard about

This should also be considered as rarest of the rare case and death penalty be awarded to all the accused.

Presumably, some newborn #DeshBhakts will ask: Why was she not accompanied by a male guardian? Was she wearing a shameless skirt? Was her hair covered? Her fault, her fault, her fault…… #RealModi‘s India is becoming sadder by the day.

I don’t understand this term “don’t play politics on rape”. We absolutely MUST and hold politicians accountable for law and order. That is what the outrage over Nirbhaya was all about, and justifiably so. Same for this 9 year old child. https://t.co/76qt0By5Ny

Nirbhaya shook the nation,many laws were made,rapist caught and punished but after 2014 there were more horrific crimes but the criminals go scout free because most of them belong to the ruling party

In other societies little children are told imaginary monster stories, in our’s children have to face them, fight them & if lucky escape them.#JusticeForDelhiCanttGirl pic.twitter.com/H96XyGr1vU

Remove security of all the political political people and give to each daughter of the country :- #JusticeForDelhiCanttGirl pic.twitter.com/qW7WLcMR7d

This is so true! Today, in our country, rapists are more protected and safe than their victims. #JusticeForDelhiCanttGirl https://t.co/p4pdObIhW4

At IFORHER, we are ashamed, broken and disgusted. We are just 10 days away from independence day and we are witnessing such heartbreaking news. How could we celebrate our freedom when our kids are becoming victims to sex-deprived monsters in broad daylight!

Do let us know your thoughts!