Woman Are Born To Give Birth; Can’t Be Minister: Taliban’s Disgusting View On Working Women Matter Of Shame

Recently, when the Taliban-led caretaker government in Afghanistan initiated the process to take oath, it received the harsh criticism over a non-inclusive government. The criticism only grew further when Taliban spokesperson made disgusting comments about women on Thursday.

As per the Taliban spokesperson, women can’t be ministers. They are born only to give birth to next generation. The disparaging comments reinforced the perception that women under brutal Taliban rule would have to suffer. 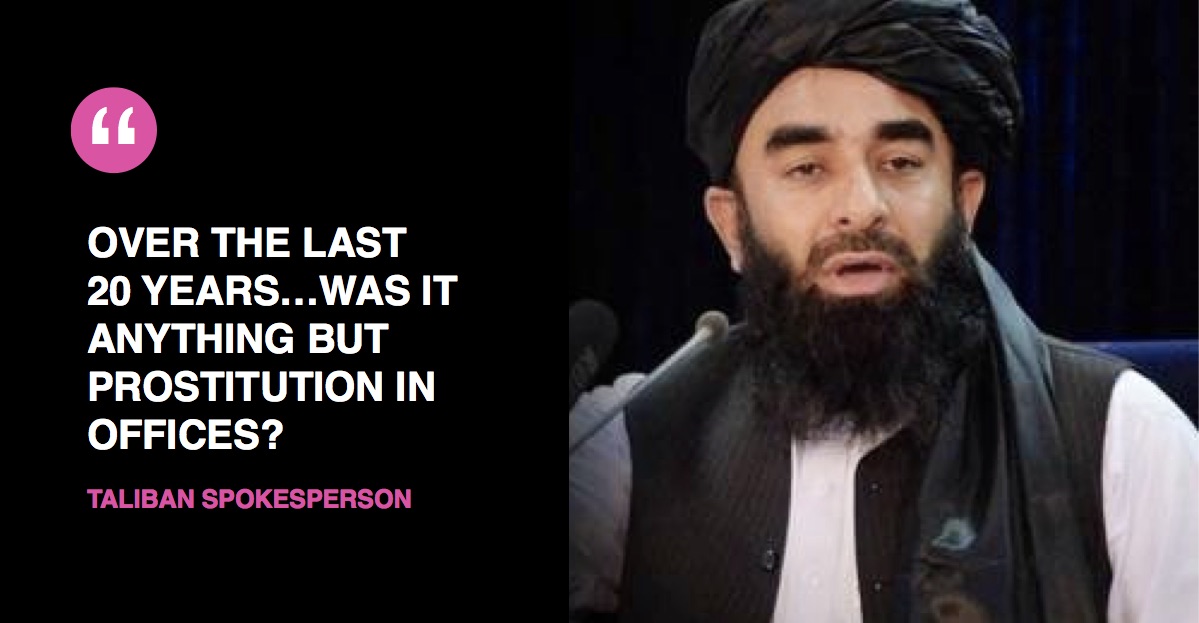 “A woman can’t be a minister, it is like you put something on her neck that she can’t carry. It is not necessary for women to be in the cabinet – they should give birth,” Taliban spokesperson Sayed Zekrullah Hashimi told TOLO news.

Angry Women risking their lives to protest on streets

Angered, disappointed and outraged by the formation of all-male Taliban government, many women risked their lives have taken to the streets to protest against it.

“Women protesters can’t represent all women in Afghanistan,” Hashimi added. The comments by Taliban spokesperson to TOLO News on the new Afghan government missing women ministers, have been widely shared on social media.

The interviewer countered: “Women are half of the society.” But Hashimi replied:”But we do not consider them half. What kind of half? The half itself is misdefined here. The half means here that you keep them in the cabinet and nothing more. And if you violate her rights, not an issue.”

Accusing working women as prostitutes, he further added:”Over the last 20 years, whatever was said by this media, the US, and its puppet government in Afghanistan, was it anything but prostitution in offices?”

You can’t accuse all women of prostitution, the interviewer interjected.

On why he thought women could not be ministers, Hashimi said:

“What a woman does, she cannot do the work of a ministry. You put something on her neck that she cannot carry.”

A Taliban spokesman on @TOLOnews: “A woman can’t be a minister, it is like you put something on her neck that she can’t carry. It is not necessary for a woman to be in the cabinet, they should give birth & women protesters can’t represent all women in AFG.”
Video with subtitles👇 pic.twitter.com/CFe4MokOk0

Taliban – the group known for its oppressive regime 20 years ago, has tried very hard to distance itself from its old policies of excluding women from work and education. But, sadly, there has been a grave mismatch between its words and actions.

At IFORHER, we are so angry and disappointed how the world is silently watching Taliban refusing basic rights of equality to women. Do let us know what you think!