It is quite disgusting when our educated men and women, who were supposed to become changemakers, reveal their regressive mindset. Recently, a woman IAS officer humiliated a girl for her sanitary pad query.

As per TOI, a senior IAS officer and chairperson-cum-MD of women and child development corporation (WCDC) Harjot Kaur Bamhrah publicly mocked a very small demand of a poor girl, who wanted sanitary napkins to be provided to girls and women at a subsidized rate.

During a one-day workshop titled “Sashakt Beti, Samridh Bihar: Towards enhancing the value of girls in Bihar”, a girl made a very simple request to Harjot Kaur. She said, “Can the government give us sanitary napkins at Rs 20-30?” In response to such a simple request, Bumrah mocked and humiliated this girl on a public forum.

“Is there any end to such demand? Tomorrow you can ask for jeans, then beautiful shoes and finally when it comes to family planning, you can say the government should give condoms too,” Kaur told the girl.

Humiliated and disgusted by the response, when the school girl said she won’t vote for the government in the next election, Bamrah ill-treated her again. She said, “Mat do tum vote! Sarkar tumhari hai. Bewakoofi ki intaha hai! Nahin, nahin mat do tum vote (You don’t need to vote. It’s the height of stupidity)!”

Here’s the video clip of the event that went viral:

Shocked by Bamrah’s response, the social welfare minister Madan Sahni said, “She (IAS officer) was supposed to boost up the morale of the girl children but instead she was found discouraging them. This is not fair. She must refrain from saying such things in public…When you suppress their demand, then who one will ask questions from the government?”

Even the internet felt disgusted by the IAS officer’s misbehavior and demanded strict action against her. 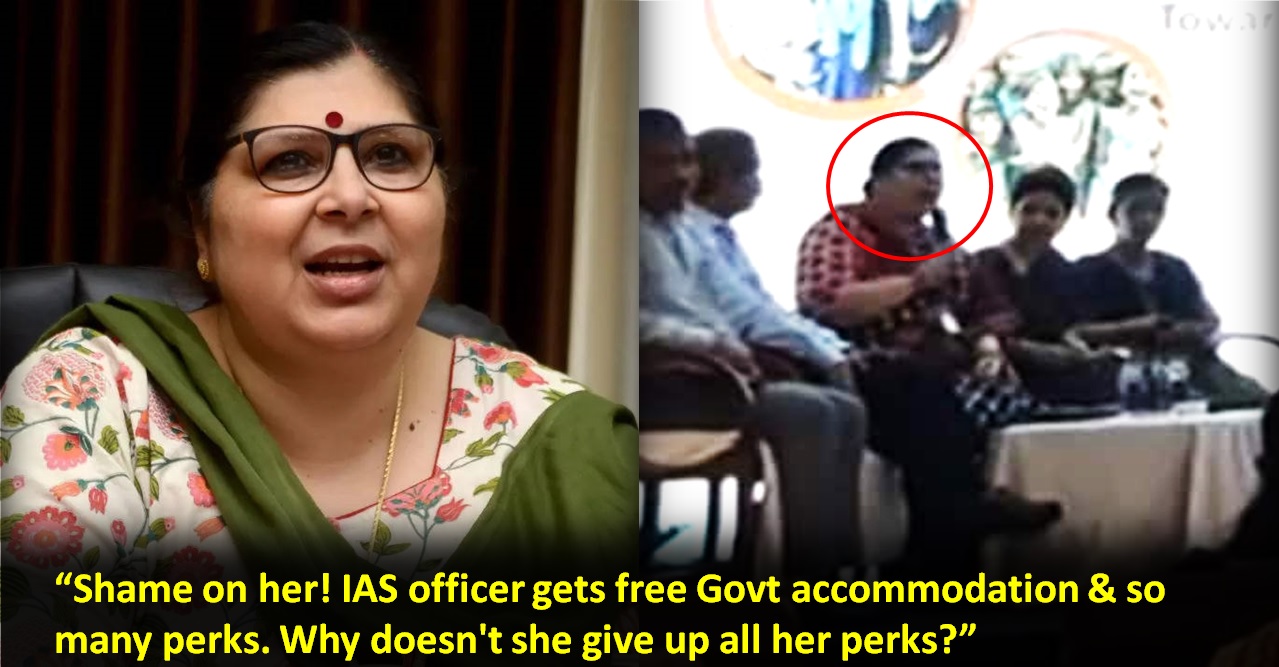 Here’s what people had to say:

This officer is not at all eligible to be chairperson of WCDC. Govt should sack such blunder officers with immediate effect.
She is taking all Govt Grants and not allowing poors.
She is saying make “Pakistan”..

She is not at all eligible for IAS officer

Comparing pads with jean and shoes is ridiculous…
What do mean by fokat class
Have u seen your sister or mother asking for pads from gov…?

No..right ! Coz they can afford it.

The main thing here is poverty

1. Both pads and condom should distribute at low prices.
2. Periods start from early age it will take time to earn money so atleast till the day girl earn money it should be free of cost.
3. It’s a need not wants
4. We can see example of Newzealand.

Its really shocking how most of the people in comment section are supporting the opinion of the ias officer.This topic concerns healthcare and hygiene. women don’t hv adequate access to pads etc in so many places which in many instances cause poor menstrual health.

Reading replies from fellow Indians, one feels ashamed. The girl hadn’t asked anything for free .. and a subsidised sanitary pad is not a lot to ask from a government who has spent record amounts on subsidies in its tenure. We are loosing sanity & sensitivity each passing day..

Very irresponsible response from an IAS officer. She should have been sensible and respond in the context of the question. Questions related to public health and hygiene must be dealt with extreme care. I hope govt takes it up with the officer to prepare her future interactions.

IAS is absolutely wrong & rude here. If a girl is asking for sanitry pads on such a platform then one can understand her financial situation which probably was never experienced by that IAS. S pads are basic need not a luxury and she is asking for discounted price not for free.

The reply of IAS lady is not correct. She was shouting unparliamentary words and saying to be Pakistani. Feeling ashamed on hearing such from the senior IAS lady.

Through our paying taxes, these officials get as many amenities. It is sad that she has to speak in a manner as if she is gifting people with amenities. Such officials need to be more compassionate instead of being sarcastic and rude.

Action should be taken against this IAS .who is she to reply on such a manner ..Shame… @PMOIndia @AmitShah please remove such IAS from public dealing as it deteriorates the image of learned IAS in public

Shocked to see Comments of privileged people .Girl did not ask for Sanitary Pads to be given free of cost. She only wants reduction of prices.What’s wrong in it? Don’t Govts give lands at throwaway prices to corporates? Don’t Govts write off corporate loans worth lakhs of crores?

Why she should expect salaries, bungalow, vehicle etc from govt.. What as such the government gives for free. I don find anything. And is this the way a Bureaucrat talk. Pataa nahi Mussoorie mein kya seekhte hain yeh sab

@PMOIndia
Her position should be revoked and she should be made to kneel in front of that little girl and apologise… Is this the way we encourage our future? Does the IAS not wear jeans? Are they more privileged than us?
Earnest please to the @PMOIndia to censure this lady.

IAS themselves take lots of freebies from government and believe this is their right because they clear some examination.
They can’t humiliate anyone they themselves invite to speak.

i think this is the issue of hygiene and really it matters when it comes to our mother,sister, daughters life.
It should be given free , who is really want for it free to save our female’s health care and who does not able to afford it

Just reducing GST on such items would be lot helpful. Why we depend on government, coz they collect taxes on my salary, every fucking thing i buy.. least they can do is help poor and reduce taxes on such products.. I second that girl.

This IAS officer get free Govt accommodation and so many perks on top of it salary. With the way she is talking, why doesn’t she give up all her perks.