Hollywood owns a towering stack of romantic movie titles that range from stories of passion to those with separation and longing as the main themes. There is a long Hollywood romantic movies list that can be watched over and over again.

The Hollywood film industry has produced both heart-rending love stories like Titanic and evergreen fun flicks like Love Actually, which masterfully evoke a whirlpool of emotions in us. No matter what age the audience belongs to, Hollywood has a captivating collection of romantic movies to offer to all kinds of audiences.

Choosing which romantic movie to watch from thousands of accomplished titles can be head-scratching. We have put together the 50 best Hollywood Romantic Movies List for you to make your job easy.

Get ready to fall in love! 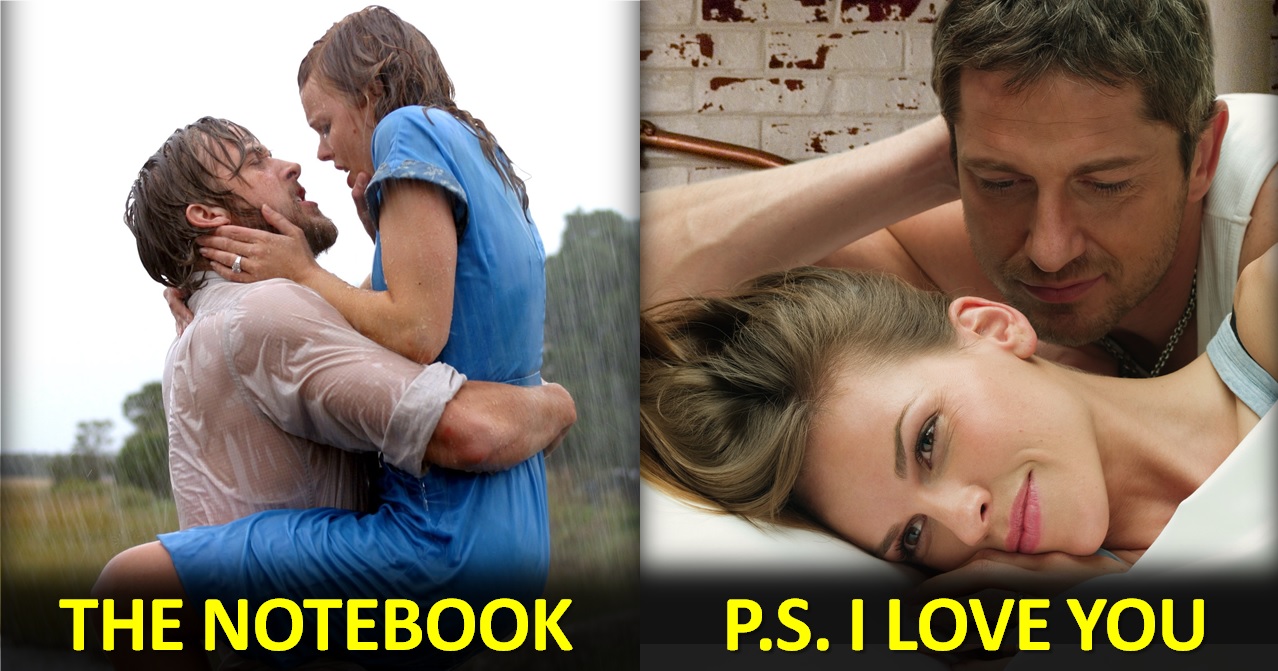 A cult classic set against the backdrop of wartime, Casablanca continues to be hailed as a tour de force in the romantic movie genre.

It is a classic fairy-tale set in Rome. A princess flees from her palatial yet suffocating world and falls in love with a newspaperman. Roman Holiday is the perfect choice for a typically charming romantic story.

A story with the classic combo of love and irony, west side story gives you Romeo-Juliet vibes with thrilling twists. It has all the elements of a romantic drama: two clashing gangs, a boy and a girl from the two gangs falling in love with each other, and the lover hunt that ensues.

Audrey Hepburn’s stellar performance in this modernistic, light-hearted, and pleasantly bling drama is a fun watch. Plus, if you are a sucker for fashion, this movie shall give you some major fashion goals.

If you want to watch something devastating yet beautiful, the love story is indeed the ideal love story to opt for.

Although based on the ‘opposites attract’ cliché, The way we were has a lot more to offer in terms of the ups and downs of relationships and how lovers evolve along the way.

Just like in Pretty Woman, Richard Gere charms you head to foot with his performance in the role of a young navy pilot. He is what the movie title says and the movie itself offers a fresh and mature perspective on love.

‘When Harry met Sally’, we got a delightful love story to watch on repeat. It’s a story of two New Yorkers who unravel the classic question of ‘can a man and a woman be friends?

12 academy award nominations and 9 won: the success of this movie speaks for itself. Based on a novel by Michael Ondaatje, The English Patient is another great love story set in wartime.

This Steven Spielberg movie keeps playing in your mind long after you have finished watching it. All that your mind can think of is “what could have avoided the end?” It’s difficult to watch this movie with your eyes brimming and a huge lump forming in your throat. Keep a tissue box handy!

This movie has a completely different take on whether a man and a woman can remain friends. What if one of them can?

He is an ordinary bookstore owner, and she is a gorgeous and successful star. What happens when cupid strikes between them?

Kat and Bianca are sisters and opposites. Kat, the reserved and uninterested older sister must have a boyfriend so that Bianca, the chirpy and vibrant sister can have one. Courtesy: their Dad’s bizarre rule. Eventually, the plan takes a different turn.

When the romantic drama – P.S. I Love You premiered in 2007, many hopeless romantics around the world cried their hearts out for weeks. This movie touched so many hearts that it became a cult movie. A young widow discovers that her late husband has left her 10 messages intended to help ease her pain and start a new life.

Monica, and Quincy, two childhood best friends, must choose between their relationships or promising careers.

A young girl with a modest ambition to become a waitress in Paris suddenly decides to dedicate her life to helping others. Why?

A legit Christmas time watch, ‘Love Actually’ brings to you a fine mix of laughter, tears, and lots of ‘awww’ moments.

Serendipity is a classic characteristic of love, and this movie is all about that. Starmark this one in your Hollywood romantic movies list.

Nicholas Sparks first swept away his readers in a tide of emotions with this book, and then the movie made on it did the same. Rachel McAdams and Ryan Gosling bring Noah and Alice to life with their impeccable performances which will leave you awestruck and teary-eyed at the same time.

‘Romantic movies can hardly be imaginative’: this genius movie smashed this assumption to smithereens when it hit the theatres in 2004. Today, it is known as one of the most experimental, genius, and heart-wrenching romantic stories to ever have been told.

A beautifully crafted love story of two cowboys, Brokeback Mountain is a must-watch for its powerful storytelling.

This classic novel by Jane Austen has given many generations an iconic love story to swoon over. The movie adaptation sure needs to be applauded because it managed to do justice to what the book aimed at delivering. Keira Knightley as Elizabeth Bennet is worth every second of your time.

A young woman is confused between two men: a messy situation that hardly anyone doesn’t relate with. Who will she choose? Add Something New to your Hollywood romantic movies list, to know more!

Based on the bestseller novel by Ian Mcewan, Atonement is an intriguing tale of love, misunderstandings, and redemption. They say forgive and forget, but is it possible when a single mistake costs you years of your happiness?

Sandra Bullock and Ryan Reynolds entertain you to bits in this light-hearted rom-com. Their chemistry is worth dying for and the story is as sweet as a romantic flick can be.

It’s a bittersweet tale that makes you think and feel hard about love in its many blues and heartache in its rawest form.

A physical therapist falls in love with her client who is a professional basketball player. Does he get the hint and respond? Watch Just Wright know what happens!

This movie will surely make you want to pack up your bag and head to Italy to meet the “secretaries of Juliet” who unite lovers just by writing letters! (in the movie) This is what Amanda Seyfried who plays Sophie discovers in Italy while on her pre-honeymoon visit with her fiancé. She doesn’t know that her actual Romeo is also waiting for her there.

Jamie Randall has an easy way with women. Only when he meets Maggie, a Parkinson’s patient, does he experience a relationship like never before.

This film was not a box-office success, but the characters – Dex and Emma- are worth remembering. They are two friends who meet once every year on a mutually decided date and discover how much they share in common!

If you are a fan of the time-travel theme, then it’s ‘about time ‘ that you watch this movie. It’s a wonderfully crafted story in which love and time travel merge and none get lost in their essence. About Time is imaginative, compelling, and a story with a strong message.

John Green’s mega-bestseller novel turned movie The fault in our stars is a heartbreaking story. There is no other way to say that. If you are in for a weepy movie time, mark this one on your Hollywood romantic movies list.

Carol is an aesthetically told layered tale of two women who fall in love with each other in the 50s.

Coasting through different chapters of his life, a young black man learns the true meaning of love and life.

In this tearjerker, Emilia Clarke and Sam Claflin give a dazzling performance as two lovers who meet for professional reasons and end up as each other’s biggest cheerleaders.

Set in 1980s Italy, this is a captivating story of a 17-year-old boy falling in love with his father’s assistant. Just like the novel it’s based on, this movie features among the most acclaimed romantic stories of all time.

The Big Sick is a refreshing change from the typical rom-com formula. It portrays a cross-cultural theme, the complexities attached to that, and a mature perspective on tackling love and relationships.

The Last Ten on the Hollywood Romantic Movies List

This one is another cross-cultural romance in which Linda, a young scientist, comes to India and falls in love with Ranjit, a local farmer. Of course, a significant purpose brings them together that saves the movie’s plot from being shallow and boring.

Love, Simon is a moving tale of a 17-year-old boy who comes out of the closet and finds his place in society.

Based on the bestseller novel that goes by the same name, Crazy Rich Asians is the story of Rachel Chu who discovers during a wedding in Singapore that her boyfriend is filthy rich and popular.

What if someone finds your diary and splashes all your secret broodings on social media for your friends and family to see? Dreadful, right? This movie has a similar storyline but a hilarious plot.

A star discovers another star and pushes her to fame and glory. But then, tragedy strikes!

It’s an uplifting movie that tells the story of a girl who after getting dumped by her boyfriend, gets together with her girlfriends to have fun and move on with her life.

A girl tired of playing an elf at a holiday stop meets a man who helps her discover what Christmas means!

A photograph leads Mae to revisit her family history and also find romance along the way.

The Before trilogy follows the love story of Jesse and Celine, who first meet on a train, passionately talk about love and life, and fall for each other.

How about when on the verge of a breakup, a couple gets entangled in an unexpected murder mystery? This movie is exactly about this bizarre situation and how the two lovebirds tackle their relationship in uncertain circumstances.

When a newly married woman visits her husband’s family estate, she is confronted with the imposing legacy of his first wife, Rebecca.