Netflix Asked To Stop Streaming Bombay Begums Over Portrayal Of Kids; Bollywood Are You Listening?

From time to time, our Bollywood industry has left many of us disappointed. Without realizing the immense impact on society, it serves the content that has an adverse effect on the impressionable minds of people.

In a country that’s continually battling sexist stereotypes, patriarchy, ceaseless violence against women & young children; should movie makers be glorifying things that are making our society unsafe for women and kids? Especially, when those movies are influencing millions of minds – young and old.

But our movie makers have shut their eyes and ears in name of capturing more and more audience. For most movie makers, misogyny seems to be a commonplace practice. It crops up routinely in scripts and shows up in full force on screen – stalkers are glorified, molestation is justified, harassment is normalized, and toxic masculinity is rationalized.

Does Bollywood think all this doesn’t have an effect on India’s social fabric? And what about the far-reaching consequences? 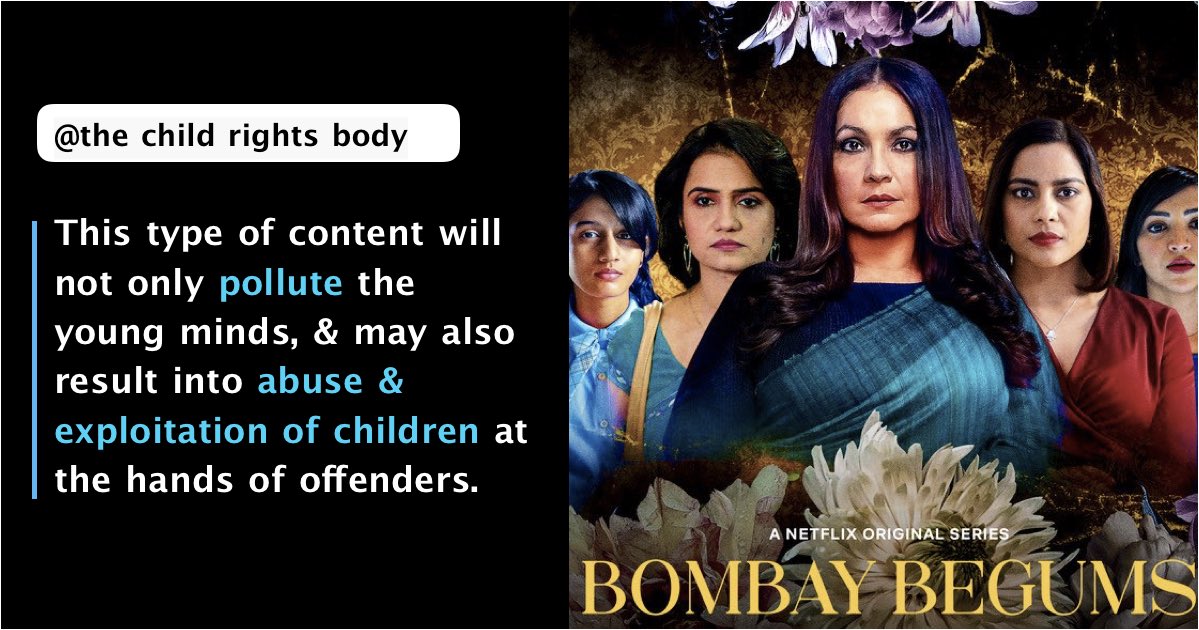 Recently, one such web-series – Bombay Begums – captured the attention of many with it’s improper portrayal of kids. Without even realizing how their content may result in the abuse and exploitation of children, the makers went ahead with the problematic depiction.

The government-appointed National Commission for Protection of Child Rights on Thursday asked streaming platform Netflix to stop airing the web-series, Bombay Begums, saying its contents may result in the abuse and exploitation of children.

As per the sources, the child rights body issued a notice to Netflix and asked for a detailed report within 24 hours on the action taken by it. The organization also warned Netflix that it would otherwise initiate “appropriate legal action”.

Starring Pooja Bhatt, Bombay Begums, a six-part series launched on Netflix on March 8, captures the lives of five women. It explores a working woman’s efforts to maintain a work-life balance, and her complex relationships with men, women, colleagues, bosses, children, and her own body.

While sharing the details, The National Commission for Protection of Child Rights mentioned how they received a complaint from two Twitter handles about some scenes of the show.

“From normalization of minors indulging in casual sex we now hate web series showing minors having cocaine,” the child rights body quoted one of the tweets. “Screengrab from Bombay Begums where a 13-year-old is snorting coke as the party she goes to is all about alcohol, drugs.”

The commission called the Twitter user’s objections “serious”, and said that it did not allow “representing, portraying and glorifying children in India in such a manner” on any media platform, including the internet and OTTs.

The @NCPCR_ issued notice to @netflix and ordered it to stop streaming #BombayBegums within 24 hours. pic.twitter.com/mHoI6gC18V

In the light of given notice, many netizens came forward to express their disgust and disappointment:

“What’s wrong is wrong. Adults or children should not be groomed in a wrong way, We are waiting for Netflix’s response, We will figure what to do next after their response ”: @KanoongoPriyank, NCPCR Chief on the (#BombayBegums) Netflix web series pic.twitter.com/amoLgoBALg

Involving 13 yr old kids in drug usage, violence or perversion is crime. Be it fiction or fact. Why pervert makers and executives in these OTTs are paid millions if they can’t see this.

Or do they do it deliberately? #BombayBegums

Dream of school girls is to send selfies with a ‘developed’ body part to Imran.

13 yr old?? At a drugs rave??
Wht the hell is wrong with these #BombayBegum ppl??
This is gonna haunt me.

Not only children, Bombay Begum somehow shows women and their pursuit for their careers in a wrong way.

Our society or the corporate world are not perfect but it is not as dark as Bombay Begum shows it.

Bombay Begum gets the theme of #MeToo right but it clearly shows that a woman has to compromise ethically & morally to be successful which is not true. https://t.co/diZoP9PvKf

Appreciated the courage of @KanoongoPriyank for taking the cognizance timely. Thanks to their team.

A law with tooth as SC advised, will surely stop the anti-Hindu propagandahttps://t.co/R0TyDSWAko

Do let us know what you think?