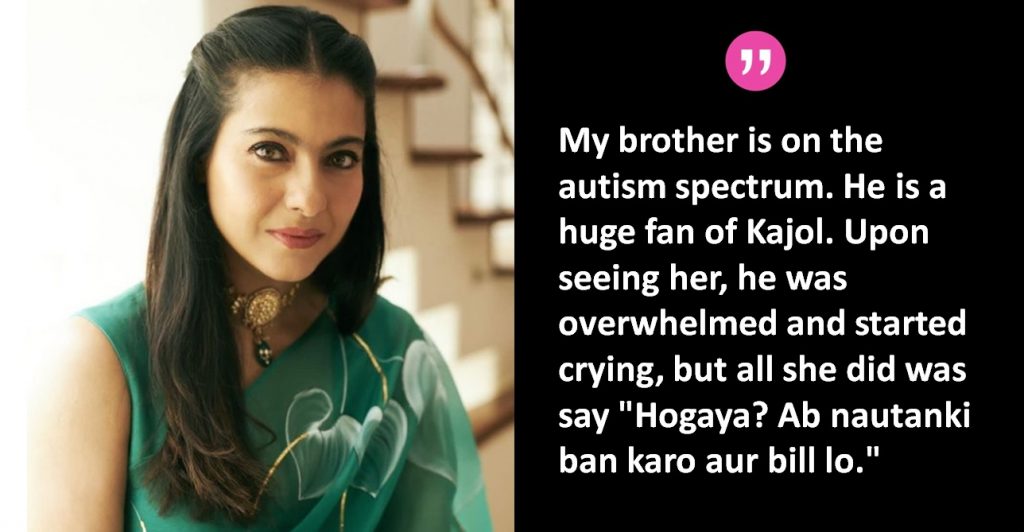 “My brother is on the autism spectrum but people began accepting him as he got to work at a high-end restaurant where people encouraged him to work. He is a huge fan of Kajol and usually sees a single film of hers on repeat as it brings him joy. Yesterday, Kajol came with a couple of friends to the restaurant he worked and he was overjoyed. He usually gets back-end duties because he is good with numbers but they allowed him to handle the bill once the dinner was finished. All he wanted to say was that she brought him a lot of happiness and that he wished the best for her future. Upon seeing her, he was overwhelmed and started crying, but all she did was say “Hogaya? Ab nautanki ban karo aur bill lo.” She even complained to the manager about employing people like him. She couldn’t even say a thank you. It’s not like he interrupted you while eating.” – Throwawayforgossip

“I saw some video recently where she was obnoxious to her sister in front of reporters and her mom literally had to tell her to shut it. Imagine reprimanded by your mom in mid 40s for bad behavior. If she can treat her own sister so badly in public imagine strangers or people who are underprivileged.”- paradoxunlimited4

“Kajol. The most arrogant one of them all. Multiple instances of being rude to people who she doesn’t consider “stars” She is definitely delusional and thinks she is this megastar. Tends to not realize that people make you a star. If you have no fans you are not admired….Anyone who is rude on multiple instances is basically pretty horrible.We all have off days /may not know the whole story etc. But to regularly be rude, speak down, act as if the sun shines from your special place is just such a turn off.” – Pixiiedreamgirl

“A friend of a friend saw Kareena when she was at a Pune college campus for Bodyguard movie shoots. He had been waiting just to see her for about two hours, excitedly told her so when she came in. To which Kareena replied – “so??” Then rolled her eyes, whipped out her phone and walked away.” – bluejaybossun

On a separate note, many people shared on Quora how is it to meet Kareena Kapoor Khan in person. And, the responses are quite shocking. One of the users, Gautam Keswani, shared on Quora:

“So this incident happened with me and all the children in my school when kareena kapoor and shahid kapoor had come to our school for a film they were doing together called milenge milenge.. And as school kids.. Each and every one of us were very excited that we would get to see these super stars in our campus..Seeing all the kids gathered around she made disgusting faces the whole time.. Never gave a smile.. (i mean we were kids cmon.. ).. Told her spot boys and bodyguards to keep us away from her.. And we were sooo desperate to have one handshake with her or just to get her autograph.. That one kid of 4th class got too excited and stepped on her heels accidently.. And OMG.. She blasted out on that poor kid almost bringing him to tears while we watched our perception of this goddess of an actress shatter to pieces.. After that incident literally no one went close to her.”  – Gautam Keswani

“Sometime around 2012, Shabana Azmi had come for the Jaipur Literature Festival and I happened to come across her. I went to say hello to her and to tell her I admired her and her husband and their work. I was standing face to face with her and she just walked past me like I was a ghost. Not even a basic acknowledgement. I felt terrible later, being the child I was then. It wouldn’t perturb me now but back then it did a number on me.” – thetrollslayer1508

“Katrina Kaif. An air staff accidentally brushed against her arm and she said, “Do you know how much this costs?” She is extremely rude and thinks no end of herself. SHE IS NOT NICE. This is informative directly from the source.” – soberfeet20

“Once, we came across Aditya Pancholi at Amer Fort. The idiot was abusing a poor guide for whatever reasons. I didn’t stay back to know the episode, but man, that guy is absolutely absurd with zero decency and very ill-mannered. This was way before Jiah Khan’s death.” – feku_saleem

“I was about 6 at some wedding at very popular hotel at the time in Bombay. We were getting in our car and I saw rishi kapoor get out of his car, so I got super excited as I used to love watching Chandni on telly. As I approached towards their car, my mom realised they are super drunk and Rishi was almost about to pass out, then my mom stated to walk me back to our car and Randhir calls us and talks to me like people talk to kids what’s your name etc and I gesture for a handshake, at this point, he starts lecturing my mom about good manners that kids should touch elders feet “hamare ghar ke Bacche bado ke pair choote hai” I remember my mom got super pissed and I’m pretty sure she must have asked him to fuck off” – KabiraSpeaking02

And, then someone on the thread concluded the celeb culture so beautifully,

“i don’t get the hype, why do people fucking admire celebrities for their work? if you want to admire someone, then do for the person they are in REAL life not just in public meet. In bollywood 100% of the celebrities are problematic, so please STOP admiring them and treating them like GOD. STOP asking them for selfies or autographs, you can’t take em with you to heaven or hell as an achievement.” And, another user wrote – “After reading all the comments the conclusion is donot treat celebrities like god they are just humans only give them appreciation and respect you will give to a normal human being. No special treatment should be given because of their fame.”

Some of these incidents are quite disappointing as they leave you sad and disgusted. What do you think? Tell us in the comments below.