After the failure of 83 at the box-office, Ranveer Singh has once again returned to the cinema halls today (May 13) with Jayeshbhai Jordaar. Directed by Divyang Thakkar, the film has been produced by Aditya Chopra under the banner of Yash Raj Films (YRF). The movie also stars Arjun Reddy’s actress Shalini Pandey and Boman Irani in pivotal roles. The movie is about female foeticide and gender disparity.

Sadly, the movie opened to a weak opening. As per the early audience reviews, people loved the concept, but the execution of the concept not so much. Fans and critics have shared their reviews and most of them are disappointed with the movie. 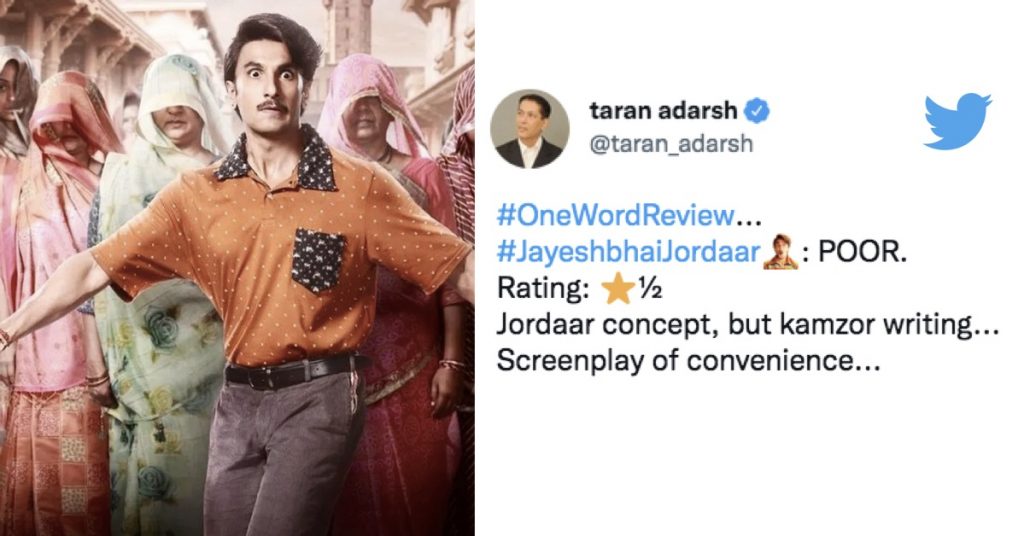 Here are some of the reactions:

Now : #JayeshbhaiJordaar
with total 4 people in theatre (including me) 😭😭😭😭

#JayeshbhaiJordaar is a bhojpuri film wtf . It’s a bore fest
RANVEER is over the top overacting. Cliched . pic.twitter.com/avcuV8ybjX

Based on the issue of female foeticide JJ is a extremely boring film which fails to provide entertainment & humor in its narrative. #Ranveersingh act is decent but he couldn’t rise above the monotonous script & direction.

Imagine how bad a movie must be that even Taran Adarsh gives it 1.1/2 stars😂😂
#JayeshbhaiJordaar

Another Disaster by #RanveerSingh !

No hype. average music. Standard routine media interactions only a few days before release. Only will have a life of its own with good WOM 😨

People when Ranveer released his film after 4 days #JayeshbhaiJordaar pic.twitter.com/J2leBSpVkM

The buzz of #JayeshbhaiJordaar is extremely low . Disaster opening as of now !

– Film struggles because of weak plot and predictable execution. 30 mins in the movie and you start feeling as if you have watched the whole film. None of the actors shine. #RanveerSingh tries his best but script fails him.

What was @RanveerOfficial thinking when taking up a piece of rubbish film like #JayeshbhaiJordaar ? Are you stupid to not see that Indians have moved on for these superficial productions made for the viewing of only those who are involved in the making of the movie??

#JayeshbhaiJordaar is an extremely boring affair. Cant even tolerate this movie for 2 hours. It was strictly supposed to be an OTT release. @RanveerOfficial you are a star so you should choose scripts which are event films. Not a random hit and miss movie. Extremely dissapointing

Though there were some netizens who liked the movie, too.

Quite liked #JayeshbhaiJordaar. Don’t know what’s wrong with people who are giving 1 star and 2 stars. Yes, the subject is not novel but it made me laugh, made me cry, made me emotional. It deserves at least 3 stars in my opinion. And you deserve 5 stars @RanveerOfficial

Whatever be the BO fate of #JayeshbhaiJordaar , it’s undeniable that it delivers on many fronts! #RanveerSingh is the anchor of the ship assisted brilliantly by a talented ensemble cast. A commentary on masculinity, equality & female infanticide: it is a WINNER.

Such a sweet performance and film @RanveerOfficial

Detailed review in a few days once everyone sees it ….

Well, with these reviews, it’ll be interesting to see how Jayeshbhai Jordaar fares at the box office.