Many women in Iran took to the streets and burned down their hijabs after the death of a woman, who was taken into custody for breaking conservative hijab laws. As per the authorities, three people had already been killed during the demonstration.

As per various sources, the death of 22-year-old Mahsa Amini who was arrested by morality police for “unsuitable attire” last week has triggered the summering anger of women over numerous issues including rights, security, and an economy reeling from international sanctions.

Recently, a video of an Iranian woman, chopping her hair in public in the capital city of Tehran was uploaded on Twitter. The video was followed by several videos of women chopping off their hair and burning their hijabs to protest the custodial death of 22-year-old Mahsa and against the hijab laws.

In Kerman’s Azadi Square, a woman was seen sitting on top of a utility box, taking off her headscarf and cutting her hair as crowd chant “death to the dictator”.

In Kerman’s Azadi Square tonight, a woman sits on top of a utility box, takes off her headscarf and cuts her hair as people chant “death to the dictator” on the fifth night of protests in Iran over the death of #MahsaAmini in custody of morality police.pic.twitter.com/3zZuZkkom1

In the city of Mashhad, a woman was seen climbing atop a police car tonight shouting “we don’t want the Islamic Republic” as protesters set fire to a police car.

In the city of Mashhad, a woman climbs atop a police car tonight shouting “we don’t want the Islamic Republic” as protesters set fire to another police car on the fifth night of protests in Iran over the death of #MahsaAmini in custody of morality police.pic.twitter.com/xqhmugtZHg

In another incident at Sari, north of Tehran, large crowds cheered as women set their hijabs alight and danced on the streets in defiant acts of protest.

In Sari, Mazandaran province, women set fire to their headscarves tonight during the fifth night of protests in Iran over the death of Mahsa Amini, 22, following her arrest by morality police over mandatory hijab law.https://t.co/yaXg8JGD3P

While protesters took to the streets chanting anti-Khamenei slogans, police fired tear gas to disperse them. In Kerman city center, protesters confronted the police and stopped them from beating and arresting fellow protesters.

In Kerman city centre, protesters directly confront riot police and plainclothes officers, preventing them from beating and arresting fellow protesters, on the fifth day of unrest in Iran sparked by the death of Mahsa Amini in morality police custody.pic.twitter.com/8KfgjRvTYz

Mahsa’s Death that triggered the protest

The protest in Iran was triggered by the death of a young Iranian woman, Masha, who fell into a coma after she was arrested in Tehran last Friday. The state media, activists, and her family demanded justice. 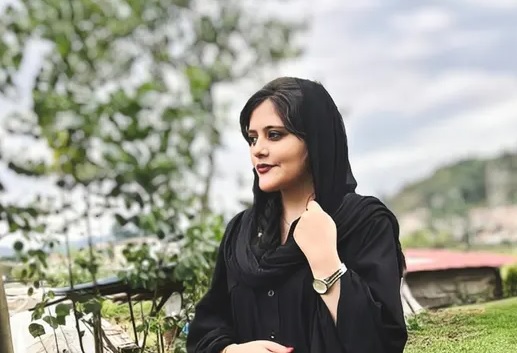 As per sources, Mahsa was on a visit with her family to the Iranian capital when police detained her. The police unit that put her in custody was responsible for enforcing the Islamic republic’s strict dress code for women, which includes the compulsory wearing of the headscarf in public. Many witnesses have shared that Masha was beaten inside a police van, which the country’s police have denied.

Hours after her arrest, Mahsa’s family was notified that she had been admitted to the Kasra hospital where she was moved to ICU. The police notified the parents that Masha suffered a heart attack, a claim that her family strongly rejected as Masha was healthy until she was arrested.