17 Highly Sexist Indian Ads That Will Put Anyone To Shame

Advertisements have been an important medium for companies to promote their products through powerful messaging. But since time immemorial, these ad campaigns have had a major issue of objectification and stereotyping women.

In order to showcase how our ads have a strong history of misogyny, we have compiled a small list of some popular yet problematic ads.

1. Jewellery ad showing how a woman didn’t choose her husband, but at least she could choose her jewellery for herself. Pathetic, isn’t it?

2. Voltas dishwasher ad called out for promoting gender biases. They showed only women using the dishwasher and missed men in the entire narrative.

3. Bournvita ad from the 1960s showcases how a woman’s happiness is in her husband’s happiness!

Woman Is Worried About ‘Shame Of Divorce’; Many Share Reasons Why She Shouldn’t Feel Ashamed

5. One of the popular pressure cooker ads that implied cooking is a woman’s job, and a man who loves his wife give her a good cooker!

6. There are many ads that leave you self-conscious about yourself and attempt to reinforce the ‘perfect body’ idea. That’s exactly what this Kellogg’s ad attempted to do, as it showed a woman losing weight because she wanted to dance at a wedding ceremony.

7. The famous Indian whisky brand’s ad showed men gazing at women and justified it with the tagline: Men will be men.

8. Promoting women as an object of pleasure for men, this vaginal tightening cream ad is completely disgusting. This ad promised women to make them feel virgin again to impress and make their husbands happy.

9. Problematic at multiple levels, this ad by a maid hiring service showcased them as gifts for women.

Dear #Nando‘s is your food so inedible that you have to rely on lines from a bad C grade movie to sell it? pic.twitter.com/q4eoXRJt1V 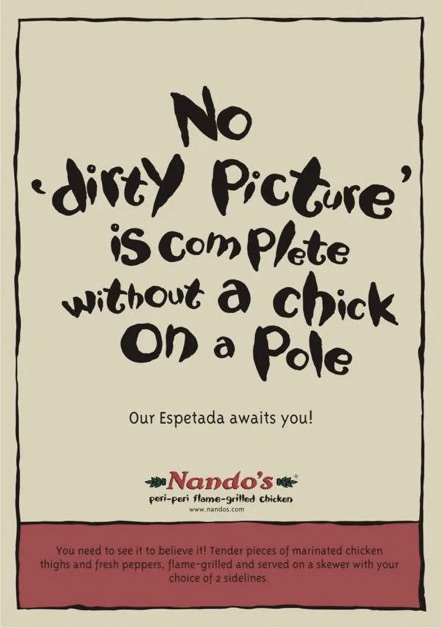 11. How could our list have been complete without Fair & Lovely ads? These ads promoted how ‘gorapan’ makes women successful!

12. Another regressive ad of sanitaryware showed how tired women enjoy a refreshing bath after a hectic day of cooking.

13. Reinforcing the regressive thought of how parents need to save for their daughters’ marriage, this bank’s ad is another disappointment.

14. Most of the men’s deodorant ads either objectify women or show how women just need good-smelling men for arousal.

16. This Jack and Jones ad from 2016 that objectified women.

17. Lastly, sewing machine ads showcased how sewing is mandatory for an ideal housewife. !