Twitter Is Schooling This Woman, Who Was Proud That There Is No Hindi Word For Divorce

India definitely has one of the lowest divorce rates in the world. But, sadly that fact is far away from the reality of Indian marriages. In the times when many Indian women are struggling in marriages, the reason behind the low divorce rates across the country lies in the fact that as a society, we neither accept divorce or divorcees. The stigma attached to divorce forces many to stay in an unhappy marriage. 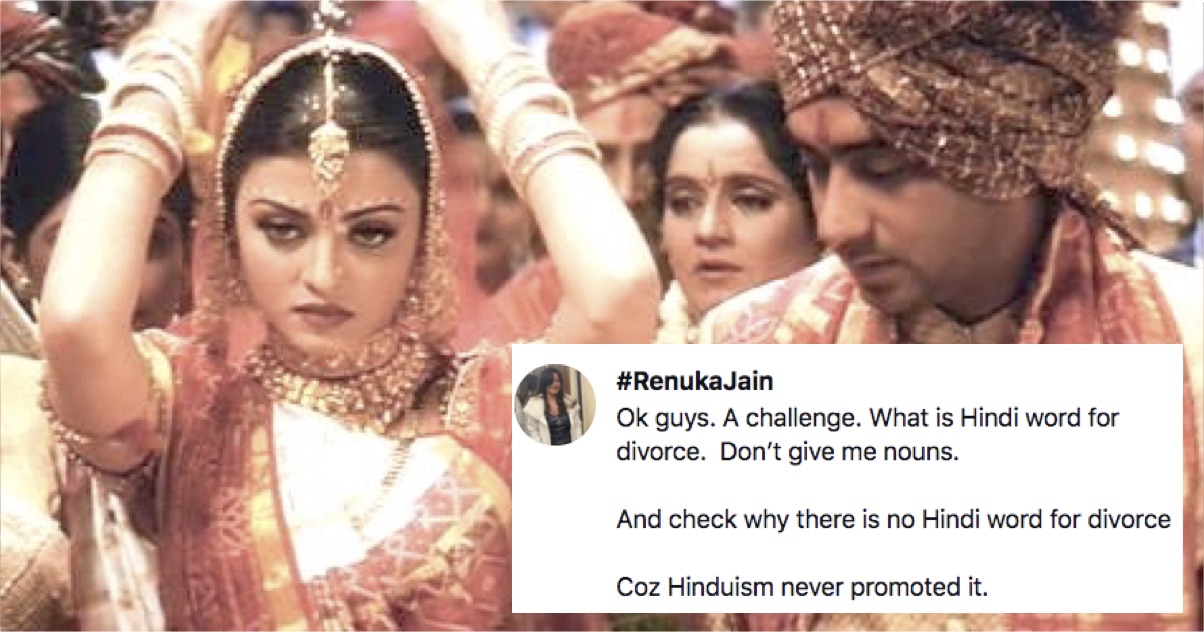 Recently, a tweet around our divorce phobic society appeared on Twitter that left many netizens angry and disgusted. This tweet by Renuka Jain was doing rounds on the internet for its sheer insensitivity – assuming the fact that Hindi doesn’t have a word for divorce, because Hinduism doesn’t promote divorce.

Ok guys. A challenge. What is Hindi word for divorce. Don’t give me nouns.

And check why there is no Hindi word for divorce

Coz Hinduism never promoted it.

Proud to be Hindu

This tweet was wrong on so many levels. The language indicated that how divorce is actually a bad thing, because it promotes unhappy marriage.

Any civilised institution of marriage would have a provision for divorce as a part of it. People living in sad marriages, abusive marriages is not something to be proud of. pic.twitter.com/vuqPRJqEcn

Ok guys. A challenge. What is Hindi word for divorce. Don’t give me nouns.

And check why there is no Hindi word for divorce

Coz Hinduism never promoted it.

Proud to be Hindu

I know a lot of other Hindu words that would put any civilized society to shame such as sati pratha (burning of live widow along with husband corpse), vidhva ashram, dahej, baal vivah

The Hindi word for Dowry is दहेज, abuse is उत्पीड़न, burning is जलाना, lol can see what Hinduism promotes. Also can’t find सतिप्रथा in another language sooo it is really not something to be proud of as you’re thinking. BE ashamed.

Don’t know about Hindi, but Sanskrit does. pic.twitter.com/AfC3j7mjcI

This is so embarassing, if i were you I’d have deleted all my social media presence for eternity

It is only because of our divorce phobic society that many women lose their lives while suffering in toxic marriage. How could we forget the recent incident of medical student found dead days after she alleged dowry harassment by abusive husband. She stayed in the abusive marriage because she was scared of what people will say if she separates from her husband.

It is high time that our society accepts divorce. Because divorce isn’t a tragedy, staying in an unhappy marriage is! Do let us know your thoughts!