It is sad how even in the 21st century, many women across the country still struggle to keep their jobs after marriage. There are many in-laws who stop them from working after marriage because ghar, bacche kaun sambhalega?

But, it’s quite funny how men are never asked this question. It is always assumed that they are the ‘primary bread earners’ of the family while women are the ‘primary caregivers’. So, it’s always a woman, who is expected to give up on her career. But what happens when a woman is more or equally professionally successful than a man in their marriage? 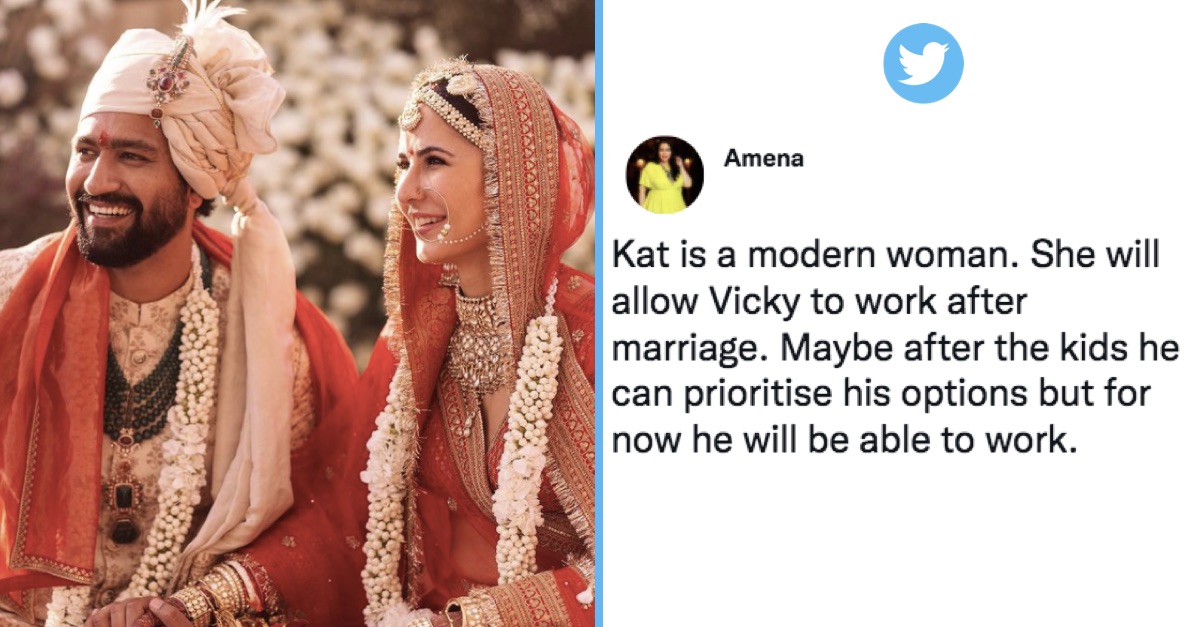 And, we loved the responses.

He should concentrate on taking care of his family now… Probably will do elder brother / father roles now.

Why should he? Isn’t she earning enough for both of them?! He will happily take care of the kitchen and kids. Don’t pressure men into doing things they don’t want to do.

Bigger question is, will audience even want to see a married actor?

Yaa…also he should accept patnidharm and take Katrina’s last name … but we are progressive so he can just add kaif without letting go Kaushal.

think Katrina earns enough to provide for both of them, he shouldn’t bother going out to work and all right ? Like where’s the need

Why does he need to? He’s married to the richest Bollywood celeb.. might just do some modelling and get by

Kat is a modern woman. She will allow Vicky to work after marriage. Maybe after the kids he can prioritise his options but for now he will be able to work.

He should definitely stop doing kissing and intimate scenes now

He must wear decent clothes outside. Not drink or smoke. Be an Adarsh Aadmi!

When the same things that are said to women are applied to men, it sounds ridiculous, doesn’t it? Then why should one gender bear the brunt of such regressive roles?