This post contains information about the top women IAS officers in India, who are known for their inspiring and exemplary work. These IAS officers have contributed heavily to country’s progress.

Gender equality in public administration is very important. A fair representation of women in bureaucracy, would definitely make the government more accountable and responsible to diverse groups. But sadly our civil services are pretty far from reaching that stage.

According to Indiaspend.com, from 1951, when the first woman joined the Indian Administrative Service (IAS), until 2020, women have made up only 13% of all IAS officers. There are multiple factors behind these low numbers, which we would talk about in a different post. But one important thing to note is that, multiple studies have shown that women are better leaders in a crisis.

In this post, we want to celebrate 11 top women IAS officers in India whose leadership inspired us and make our country a better place! 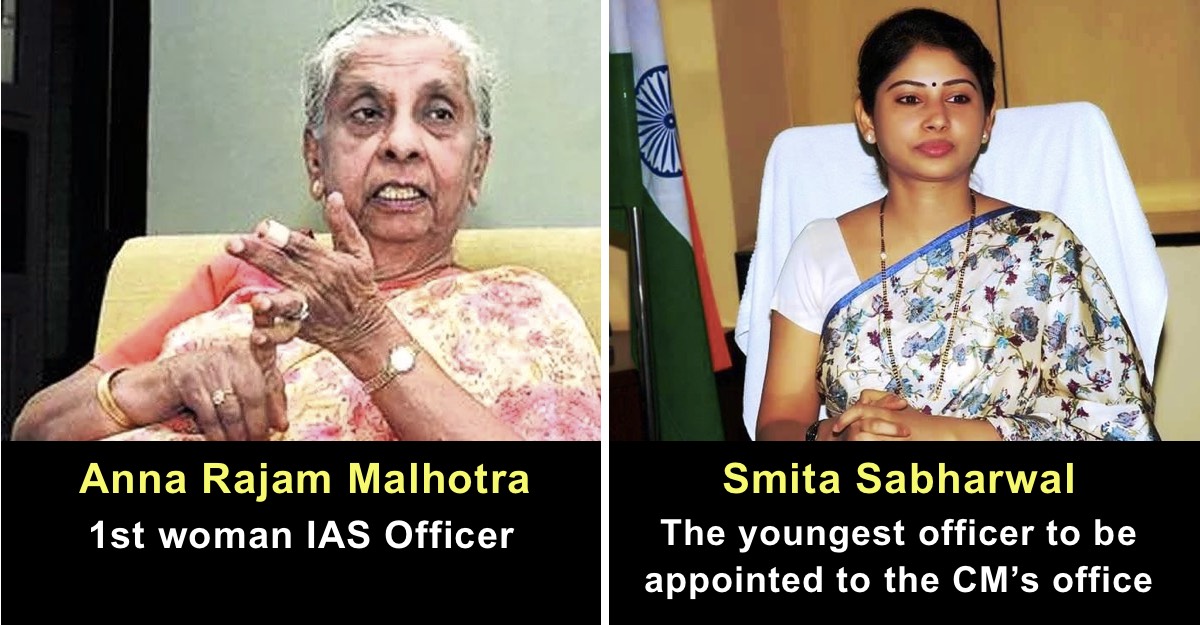 Anna Rajam Malhotra became the first IAS officer back in 1951. While appearing for the interview, the panelists suggested that she should look at joining Foreign Services or Central Services, as they were more suitable for a woman. But Anna would take none of it, and became India’s 1st IAS officer.

Through her career, she fought the patriarchal thought process that a woman cannot manage law and order. She not only proved her critics wrong, but also worked on many game-changing projects for the country. She worked closely with Rajiv Gandhi and played an important role in building India’s first computerized port, Nhavasheva, in Mumbai.

Preeti Sudan, a 1983 batch IAS officer is one of the finest women IAS officers in India. As on the date of writing this article, she is serving as Secretary, Ministry of Health & Family Welfare, Government of India. She was a key member in the planning and implementation of the Ayushman Bharat Yojana. During the pandemic, she was working closely with the Union Health Minister to coordinate between centre and states.

She is one of the first professional nurses who became an IAS officer. Her work as the Deputy Commissioner of Kodagu in Karnataka received national recognition. Annies was selected as an IAS officer in 2012.

Smita Sabharwal is the youngest officers in India to be appointed to a Chief Minister’s Office. The fiery IAS officer from the 2001 batch cleared the exam at a young age of 22 securing the 4th rank in the country. Smita is popularly known as the ‘People’s Officer’ as she involves citizens in addressing their issues.

When Sabharwal was serving as the Municipal Commissioner of Warangal, she launched a ‘Fund Your City’ scheme and encouraged residents to take part in building infrastructure in Maoist- affected areas. She also changed the healthcare and education scenario of Karimnagar in Telangana when she was the District Collector there.

Beela Rajesh is a 1997 batch IAS officer, who hit he headlines for her commendable work during the fight against the COVID-19 pandemic in the Indian state of Tamil Nadu. She also played a vital role during Dengue outbreak in the state in 2019.

Tina Dabi, the Civil services topper of 2015, is the first Dalit to have topped UPSC. From the first day till now, she has done a commendable job. Her ‘Bhilwara Model’ was applauded across the country when the district became one of the first Covid-19 containment clusters.

A 2010-batch IAS officer, Durga Shakti came into the limelight when she exposed illegal sand mining mafia in NCR region. She exposed a land scam in Mohali as well, and has been widely praised for making efforts to clean up the corruption in the Indian political system.

Divya Devarajan is among those women IAS officers in India who won the hearts of rural India. She was posted in Adilabad, Telangana during the tribal conflict of 2017. To resolve the conflicts, she even learnt their language and put in great efforts. In return, tribals named a village after her, to celebrate the great work she did in the region.

Swati Bhadauria secured 74th position in UPSC CSE Batch of 2012. She has set many milestones in her 10 years of service. She was posted during the glacier tragedy in Uttarakhand and did commendable work, that was appreciated all around the country.

In the list of top women IAS officers in India, Harshika Singh is the one who worked tirelessly to improve gender ratio, female education and maternal mortality rates. She initiated the ‘Gyanalaya’ program for girl-child education across 35 Gram Panchayats in Tikamgarh, roping in hundreds of local women in the movement. The program became a huge success, and has been appreciated and replicated across many other districts of the country.

This power lady is known for the ‘Green Revolution’ in Hyderabad. Inspired by her IAS father, Hari Chandana Dasari left the job in London to join Indian Administrative Services in 2010. During the last 10 years as an Indian Administrative Service Officers, Ms Dasari has worked relentlessly to bring positive change in the lives of the people. By adopting sustainable and inclusive growth models, she has been able to strike a fine balance between the needs of the people and the ecology that surrounds them. Her work, especially during the pandemic has ensured that people not only remain safe but also prosper during the unprecedented crisis. Hari Chandana’s foresight is perhaps one of the many reasons why she had bagged The Social Impact Award by the British Council in 2021.

More power to all women IAS officers in India who are smashing the stereotypes to emerge as winners!