Ajay Devgn’s Drishyam 2 was released this weekend, and the audience is going gaga over his acting skills. The movie collected over Rs 15 Cr on Day-1, and has been rated 8.9 on IMDb.

While with Drishyam 2, Ajay has proven his mettle once again, but this is definitely not the first time we are blown over by his acting skills. Here’s the list of best Ajay Devgn’s movies that prove he aces intense acting better than anyone else in the industry. 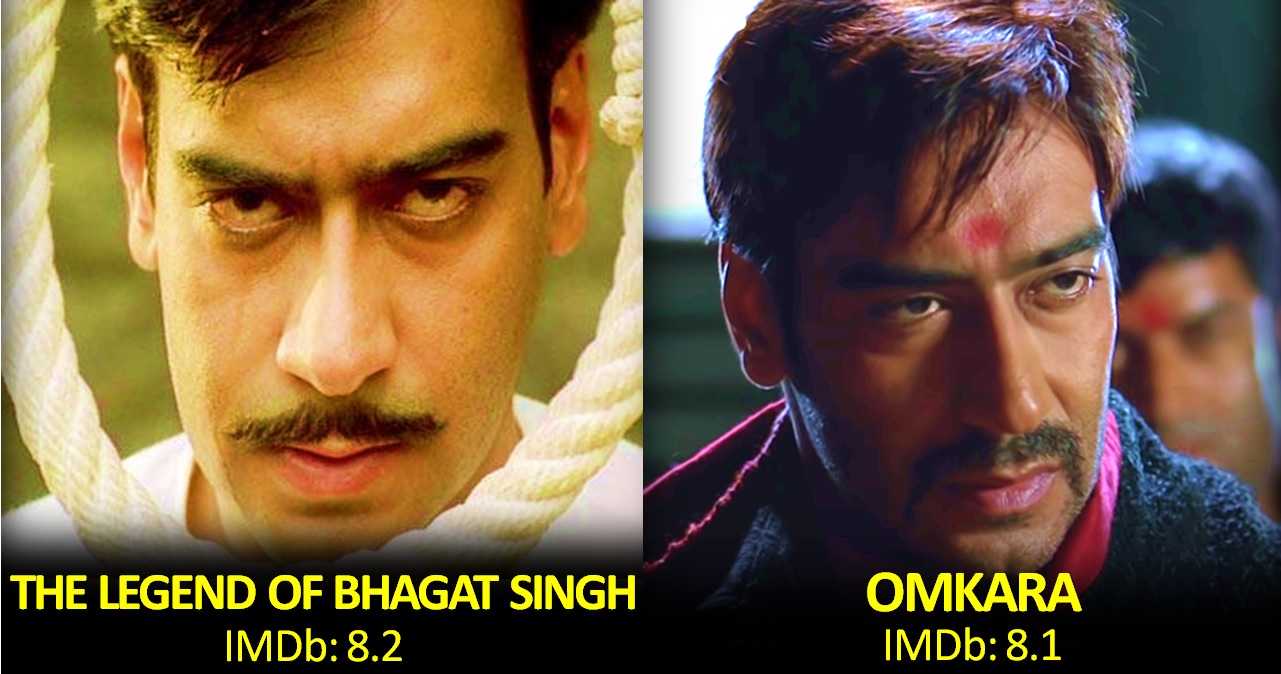 The story of the legendary freedom fighter – Bhagat Singh, has been told many times on the big screen. But the way Ajay aced the role, makes this rendition probably the best of all. You can watch it on Amazon Prime Video.

One of the classics – Omkara, is an adaptation of Shakespeare’s ‘Othello’. Directed by Vishal Bhardwaj, Ajay plays the lead role of Omkara (Omi) Shukla in the movie. Omkara loves his wife, but his close – Tyagi, schemes and creates a misunderstanding between Omkara and his wife (Dolly). What happens next? Watch the movie on Jio Cinema to find out.

A self-righteous IPS officer gets posted in Tezpur. The local police officers are completely dysfunctional, and corrupt. How he motivates his force and stands up against politics and corruption – makes this a great movie. We don’t think anyone else could have done justice to the role of Amit Kumar. You can watch the movie on Netflix.

Of course, the 1st edition of the thriller movie couldn’t have been a success without Ajay’s performance. Vijay Salgaonkar tries his best to protect his family from the dark side of law and hatches a plan that fools everyone. Well almost! If you haven’t already, do watch the movie on Disney+ Hotstar.

Set in Bihar, during the times kidnappings were on the rise, the movie shows the complex relationship between a father & son. Directed by Prakash Jha, the movie brought out the best of Ajay, and we are thankful for that. The movie is available on Prime Video.

Mallik (Ajay Devgn) teams up with Chandu (Vivek) to eliminate the competition in the underworld, and eventually becomes the most-feared gangster. But life is never that simple. Ajay even won the Filmfare Critics Award for Best Actor for this movie.

With a superstar cast of Aishwarya Rai, Salman Khan, and Ajay Devgn, the movie was one of the most talked about films of 1999. Nandini loves Sameer but marries Vanraj under family pressure. How Ajay portrays the difficult role of a husband, who loves his wife, but knows his wife might never love him back.

Directed by Rituparno Ghosh, Raincoat is a re-telling of O’Henry’s short story, ‘The Gift of the Magi’. Armed only with an address and a borrowed raincoat from his friend, Mannu steps out one rainy Calcutta afternoon in search of his long-lost love – Neeru.

As a young gangster tries to overthrow the smuggling king of 1970s Mumbai, shots are definitely going to be fired. Milan Luthria’s 2010 movie, surely brought out the best in Ajay Devgn.

Three men from different strata of society cross-paths one fine day, and end up changing each other’s destiny. Ajay plays the role of an influential student leader – Michael Mukherjee – to perfection, and proves why he is one of the best acting talents in the industry. You can watch it on Netflix.

Ajay Devgn’s debut movie saw him winning the Filmfare award for Best Actor. He plays the role of a young man who hates his father’s criminal profession and plans to live a peaceful life. But destiny has other plans. The movie saw Ajay entering Bollywood with a bang!

Directed by Mahesh Bhatt, Zakhm saw Ajay winning the National Award for Best Actor. In the movie, Ajay’s mother (Pooja Bhatt) is seriously injured by Muslim demonstrators and has a last wish – that she be interred as a Muslim. It is then Ajay becomes aware of his ‘Christian’ mother’s past and how she had to pretend to be someone else. The movie is available on Prime Video.