Recently, Vicky Kaushal released the teaser of his upcoming movie – ‘Sam Bahadur’, which is based on the real-life hero – Field Marshal Sam Manekshaw. The movie is directed by talented Meghna Gulzar, who has given us hard-hitting movies like Raazi and Chappak.

But, we must say the movie makers have really big shoes to fill in, as Sam Manekshaw is the most celebrated Indian war hero of all time. For unversed, here are some inspiring facts about India’s first field Marshall, Sam Manekshaw aka Sam Bahadur.

Who Is Sam Manekshaw aka Sam Bahadur – The Legendary Hero? 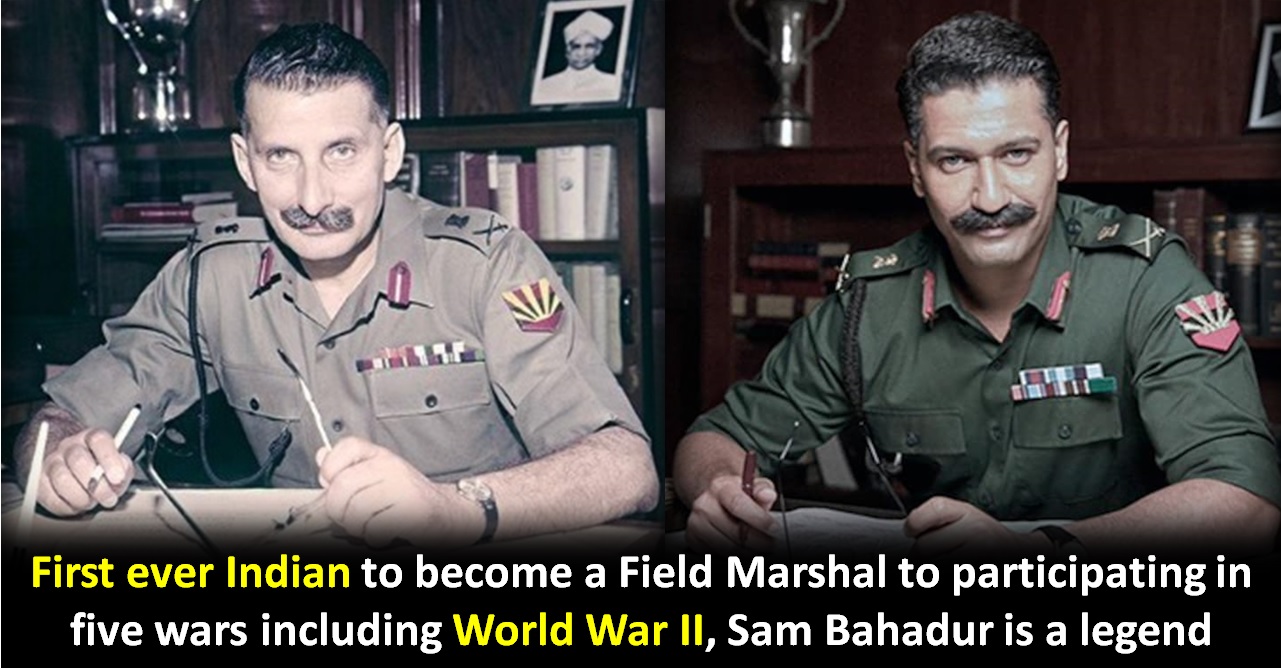 2. The Architect Of India’s 1971 Win Against Pakistan

He was the legendary hero behind our victory against Pakistan during the 1971 war. Under his leadership, the Pakistani Army was brought to its knees in just 13 days and over 93,000 soldiers and government officials surrendered to India.

As a child, Sam Manekshaw was mischievous and high-spirited. His early ambition was to become a military doctor like his father. But destiny had different plans for him.

After completing his Senior Cambridge, he asked his father to send him to London to study medicine. But, his father refused on the grounds that he was not old enough and his father had to support the studies of his elder brothers, both of whom were studying engineering in London.

In an act of rebellion against his father, Sam Manekshaw applied for an entrance exam for army officers. He was one of the fifteen cadets to be selected through open competition, in fact, he was sixth in the merit order.

Sam was awarded the Padma Vibhushan (1972) and the Padma Bhushan (1968), the second and third-highest civilian awards in India.

9. The Tale Of His Miltary Cross

During World War II, he was also awarded Military Cross for his exemplary courage as it was feared he might die. As per sources, fearing that Sam would die, the general pinned his own Military Cross ribbon on him saying, “A dead person cannot be awarded a Military Cross”.

Mankeshaw did not want the Indian Army to get into the brutal trend of dishonoring and raping women in a defeated land. So he issued strict instructions forbidding looting and rape. In addressing his troops, Manekshaw was quoted as saying: “When you see a Begum (Muslim woman), keep your hands in your pockets, and think of Sam.”

On the eve of the war against Pakistan in 1971, Indira Gandhi asked General Maneksaw if he was ready for the war. He replied: ‘I am always ready sweetie’. As per various sources, he had a great rapport with Indira Gandhi due to his Parsi connection and would often call her a ‘sweetie/sweetheart.’

In June 2008, Sam died of pneumonia at the military hospital in Wellington, Tamil Nadu. At that time, he was 94 years old. Reportedly, his last words were “I’m okay!”.

Sam Mankeshaw was buried in the Parsi cemetery in Ooty, Tamil Nadu, with all the military honors. As per sources, he is buried adjacent to his wife’s grave.

Annually, on 16 December, Vijay Diwas is celebrated in memory of the victory achieved under Manekshaw’s leadership in 1971.

What a Legend! India will never forget you, Field Marshal – The Hero, Who Was Born for Indian Army!