Aamir Khan returns to big screen after four years with Laal Singh Chaddha, which is official Hindi remake of the Hollywood classic Forrest Gump. The 1994 classic, Forrest Gump, starring Tom Hanks is quite popular across the world for its great screenplay, talented acting and intelligent direction. While the movie is releasing on big screens today, the review from the international media surfaced yesterday.

Some of the media houses gave the movie positive reviews as they called it a worthy remake of Forrest Gump.

Proma Khosla of Indie Wire gave the film B+ & called it a “Forrest Gump remake that stands on its own” & wrote, “Khan plays the role like he’s been doing it for years, and in a sense he has; his Laal is instantly evocative of PK, the alien he played in a 2014 film of the same name — a little naïve, a little eccentric, and ultimately good-natured. He captures original star Tom Hanks’ memorable body language and speech patterns with a full beard and turban and lilting Punjabi dialogue that translates even lines as famous as ‘and that’s all I have to say about that.’”

She also wrote, “It is meant to showcase a nation as dense and diverse as India as comprehensively as possible, a task Roth and Zemeckis never had to tackle, and for which Kulkarni and Chandan deserve a whole box of gol gappe.”

But, what left many shocked when one reviewer called it a superior version of the Tom Hanks starrer.

Giving Laal Singh Chaddha 7 out of 10, Witney Seibold of Slash Film wrote, “Laal Singh Chaddha might still be as fitfully mawkish as “Gump” in its tendency toward brazen sentimentality, but is a film more deliberately rooted in philosophies of gentleness. It is the superior version.”

She further wrote, “Aamir Khan (3 Idiots, Dangal) plays the title character as possessed of the same wide-eyed innocence as his American forebear, but, perhaps thanks to the filmmakers’ overwhelming sense of corny earnestness, emerges as a more propitiating figure.”

After reading the review calling it a superior version, many netizens came forward to share how they don’t believe the reviews.

One user wrote “Chal Jhootha”, the other user said. “This is going to grab Oscar’s..Cmon ,bootlick more guyssss”,, The other user wrote,” Hope Aamir would at least do half of what Tom did in Forest Gump.” and one wrote, “I’m possible Aamir khan is good bug Tom hanks acting is on another level.”

Here’s what other wrote: 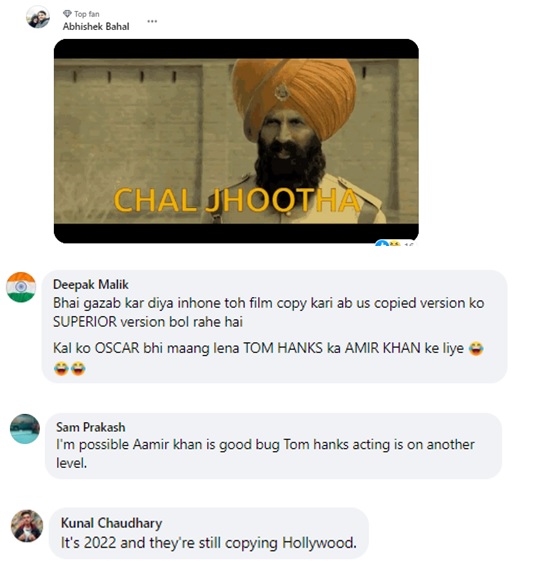 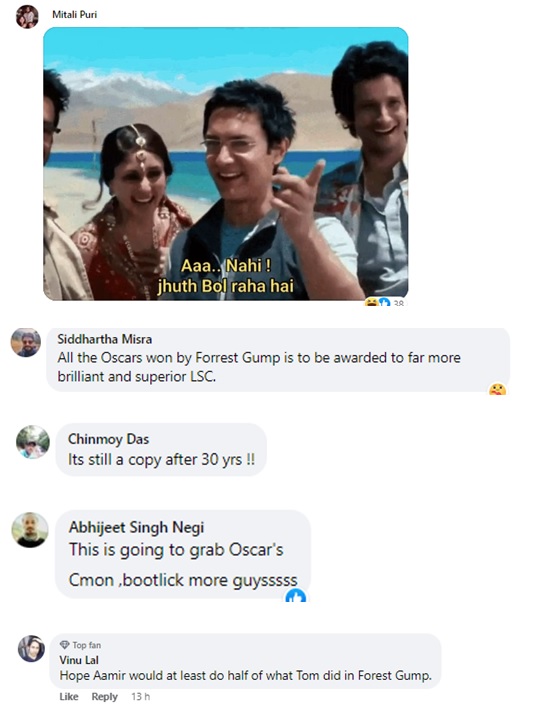 Another International Reviewer Called It A Painful Watch

Another media house, Austin Chronicle, gave Laal Singh Chadda only one and a half star out of five and wrote, “Rather than Hanks’ straightforward portrayal of a man with a low IQ, probably somewhere on the autism spectrum, Khan plays Laal as a caricature of an intellectually disabled protagonist; imagine Billy Bob Thornton from Sling Blade, but less subtle. It’s almost painful to watch, as he’s known as one of India’s finest actors but when challenged with this character, he overshoots by a mile, bringing to mind a certain quote from Robert Downey Jr. in Tropic Thunder that I am hesitant to restate here, but you probably know the one about never going full …”

The movie is directed by Advait Chandan & also stars Kareena Kapoor Khan, Naga Chaitanya, Mona Singh & Manav Vij. Better than original, Really? What do you think? Tell us in the comments below.