The good news is here. Squid Game, one of the most popular Korean thriller shows, is returning with its second season. Yes, isn’t that exciting? On Sunday, Netflix announced the second season of the show Squid Game on social media. Sharing a note by Squid Game’s writer, director, producer, and creator Hwang Dong-hyuk, Netflix released this exciting news to the fans. As we all know, the first season of the show, which was released last year, received immense love from critics as well as fans.

In the first tweet, Netflix announced the news saying, “Red light… GREENLIGHT! Squid Game is officially coming back for Season 2.”

Squid Game is officially coming back for Season 2! pic.twitter.com/4usO2Zld39

In the same thread, Netflix shared the director’s note with the fans. The post was captioned, “Hwang Dong-Hyuk writer, director, producer, and creator of @squidgame has a message for the fans:”

The message reads, “It took 12 years to bring the first season of Squid Game to life last year. But it took 12 days for Squid Game to become the most popular Netflix series ever. As the writer, director, and producer of Squid Game, a huge shout out to fans around the world. Thank you for watching and loving our show. And now, Gi-hun returns. The Front Man returns. Season 2 is coming. The man in the suit with ddakji might be back. You’ll also be introduced to Young-hee’s boyfriend Cheoul-su.” 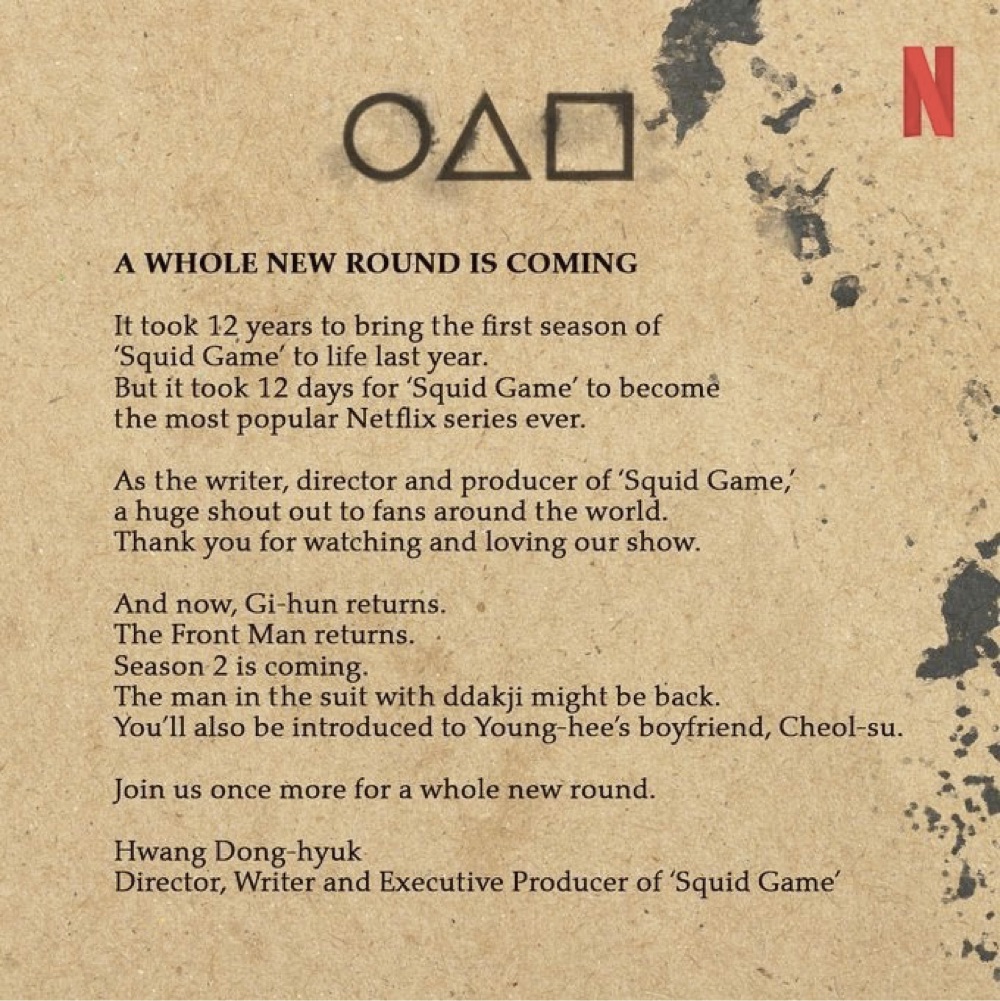 Fans got really excited with the news. Reacting to the news, one fan wrote, “OMG! I just can’t wait for this.” Another wrote, “It better be good,” some people called the show “overrated.”

Squid Game revolves around the interesting story of cash-strapped individuals. They compete against each other in children’s games to win a large sum of money. In case they lose the game, death is the only option. During its release last year, the show was the most-watched series on Netflix globally.

In December last year, Hwang revealed to Korean network KBS,  that not only has he finalized the plotline for the second season but he is also in talks with Netflix for the show’s third season. In the same interview, Hwang also talked a bit about Season 2’s storyline. He said, “The focus will be the story of Seong Gi Hun (played by lead actor Lee Jung) unraveling (the mysteries of the organization behind the game). The overarching plotline of Season 2 will be the story of the people that Gi Hun meets and the people he chases after.”

Though Netflix has made an announcement, there is still no official premiere date as yet. We will update you as soon as the exact release date will be announced.