In recent times, we have blamed Bollywood for giving us senseless movies or unnecessary remakes. But, thankfully, Bollywood is changing, and it’s quite evident with the recent Bollywood movie – An Action Hero! Ayushmann Khurrana’s new movie might not have seen a lot of traction but the audience who went to watch it was not left disappointed.

Ayushmaan-Jaideep Ahlawat starrer movie received great reviews from critics and audiences. For the unversed, the movie is about  Maanav, a Bollywood megastar action hero, who is forced to live in hiding after becoming involved in an unsightly incident.

The movie left so many impressed that many flocked to Twitter to post reviews. Here’s what Twitter has to say about Ayushmann Khurrana’s An Action Hero: 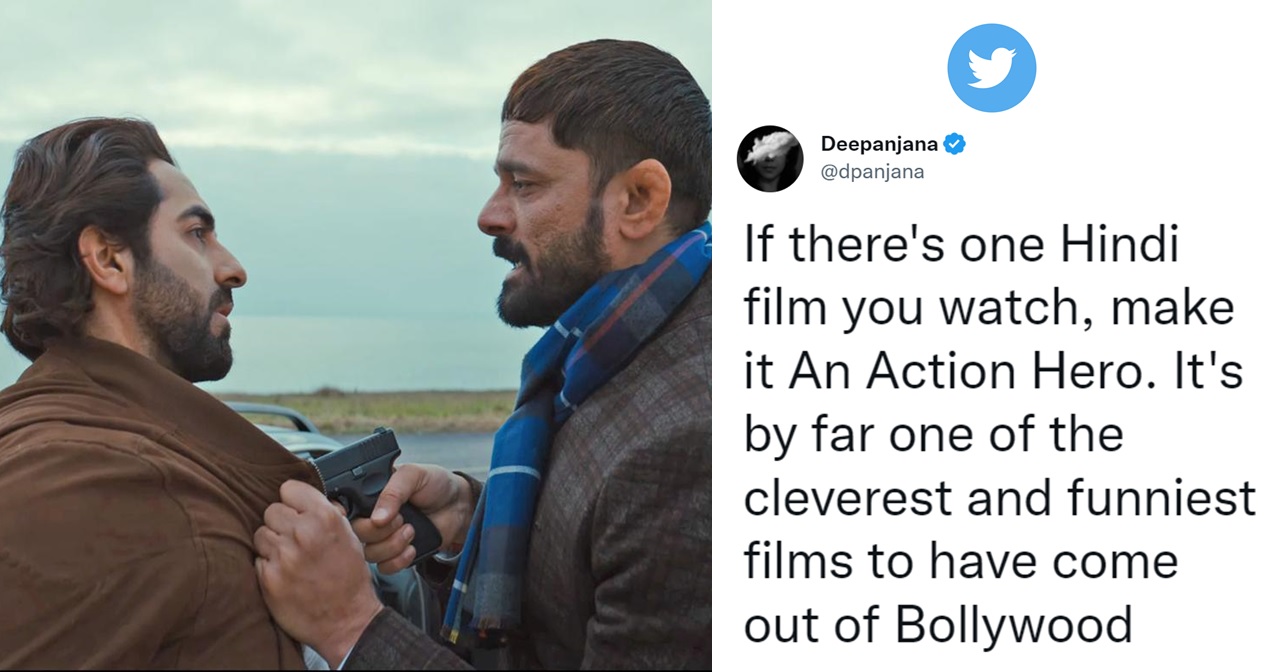 “#AnActionHero combines slick action with crackerjack chemistry between its leads. The near-erasure of women in the story is depressing, but the film’s pace gives us little time to think.” My review 👇🏽 #AyushmannKhurrana #JaideepAhlawat #Review https://t.co/ekdVEcZelC

Quite a week for Hindi cinema. Thoroughly enjoyed AN ACTION HERO, which is all sorts of clever, funny…and so topical. https://t.co/6oPORovmPM

If there’s one Hindi film you watch, make it An Action Hero. It’s by far one of the cleverest and funniest films to have come out of Bollywood stables. Also, when this film lands on OTT, I’m going the GIF the heck out of Jaideep Ahlawat’s scenes. He’s all sorts of brilliant.

Saw @ayushmannk in a fab new avatar as An Action Hero and loved him in every single frame. The man can throw a mean punch, or two, and how! Now to watch my other favourite man @TheAaryanKartik in and as Freddy. How blessed are we to have such fearless, risk-taking talents around!

Think this is one of my favourite Ayushmann Khurrana performances. He has just the acumen for #AnActionHero’s wild ride & bonkers genre mix, regularly elevating its few drafts underwritten material by playing up its touché potential to the hilt. Review: https://t.co/lCCiDyjPfA

Had a blast watching ‘An Action Hero’ – a hilarious satire of many current events surrounding Bollywood, our news media and the fickle nature of fandom. And the action kicks ass too. This is now my favorite @ayushmannk movie.

There’s a scene in #AnActionHero where when @ayushmannk‘s character Maanav is told that he’s just an ‘action hero’ on screen, the latter quips, ‘Waqt badal gaya hain, ladna maine seekh liya hain’. And boy, it’s such a fun to watch Ayushmann pack a punch in this space. pic.twitter.com/YUmUAmKxA3

An Action Hero is actually an intelligent dark comedy that will leave you in splits on more than one occasion.

#AnActionHero review: Ayushmann Khurrana packs a punch in this cat and mouse chase between trigger-happy men

.#AnActionHeroReview: Watch out for dark humour & some action-packed face-off scenes between @ayushmannk & @JaideepAhlawat that are the high points of the film. Apart from his chiselled new look & swag, Ayushmann has quite a few great one-liners to flaunt.https://t.co/4YswMu3dIW

“Fragile egos set a lot of balls rolling (and busting) in this mad caper which turns ludicrous by the minute yet remains massively entertaining,” says @serialeditor in his 🌟🌟🌟💫 star review of #AnActionHero #AnActionHeroReview #AyushmannKhurrana https://t.co/aKIGEut6Vb

#AnActionHero review: Aided by clever performances from #AyushmannKhurrana and #JaideepAhalwat, debutant writer-director Anirudh Iyer delivers a a piquant entertainer that makes sharp observations on the fickleness of fame and futility of bloated egos https://t.co/RZDQ6xwDB3

#AnActionHero
After a long time a film where I got no opportunity to fiddle with my phone!
p.s – It’s intermission right now !
Superbly Gripping! 👌🏼
Ab tak ZABARDAST pic.twitter.com/Fv8YKSPPU0

#AnActionHero rides on a solid and fast paced first half, which goes a little off track in the second due to repetitive screenplay but packs a punch with an unexpected climax. #AyushmaanKhurrana #JaideepAhlawat

Ever seen a trailer of a movie and said ‘maybe I’ll just skip it,’ but somehow still managed to go see it in the theatre and were blown away? @ayushmannk and @JaideepAhlawat An Action Hero is exactly that type of movie. #AnActionHeroReview #AnActionHero https://t.co/waOapIPrAs

We hope this Bollywood movie performs well at the box office. Because if intelligent movies won’t perform, then maybe we are the problem! Have you watched ‘An Action Hero’? How did you find it? Tell us in the comments below.