Recently, Israeli filmmaker Nadav Lapid created a nationwide furore when he used the terms like vulgar and propaganda for a successful Bollywood movie – The Kashmir Files.

During his speech, Nadav Lapid said, “All of us were disturbed and shocked by the 15th film, The Kashmir Files. That felt like a propaganda, vulgar movie, inappropriate for an artistic competitive section of such a prestigious film festival. I feel totally comfortable to openly share these feelings here with you on this stage. In the spirit of this festival, can surely also accept a critical discussion, which is essential for art and life.”

This statement set the internet on fire. From celebrities to netizens, many came forward to share their views.

#WATCH | Anupam Kher speaks to ANI on Int’l Film Festival of India Jury Head remarks for ‘Kashmir Files’, “…If holocaust is right, the exodus of Kashmiri Pandits is right too. Seems pre-planned as immediately after that the toolkit gang became active. May God give him wisdom..” pic.twitter.com/cUQ1bqzFs7

The singling out of a film and the language used to describe it is completely unbecoming of a film jury or critic. It reeks of politics. Cinema has always been the harbinger of truth & change, not an agent to stifle or snuff it. Shameful display of political opportunism at #IFFI. 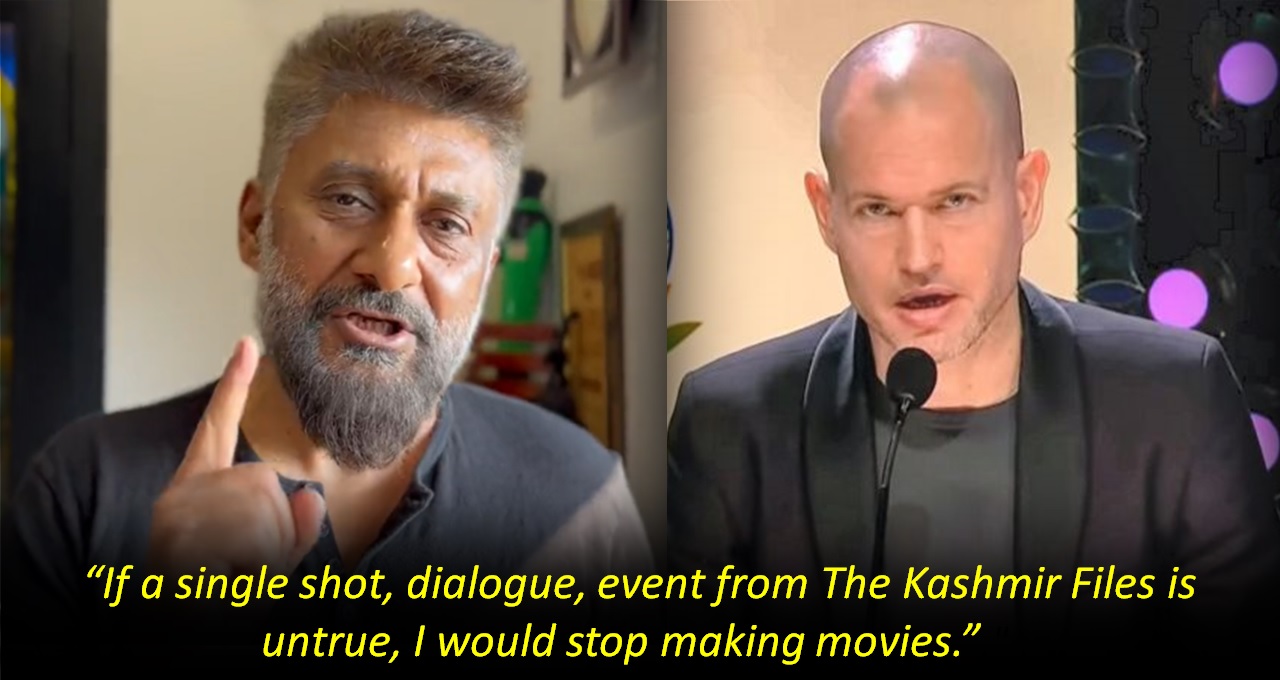 In a video clip, Vivek Agnihotri challenged the Israeli filmmaker to find a single instance in the movie that is a lie. He further added that if anybody finds a single frame/event in the movie, which is a lie, he would stop making movies.

The video starts with Vivek Agnihotri saying, “This is nothing new for me. Because such things are often said by terrorist organisations, urban naxals and by those who want to divide the country. What is shocking to me is that narrative supported by those who wish to separate Kashmir from India were voiced at the stage of an event organized by the government of India. And a few who live in India used it against the country. Who are these people?”

He also said, “It is often said that The Kashmir Files is a propaganda movie, that the Hindus were never killed in the valley. So today, I challenge all intellectuals, urban naxals and this great filmmaker from Israel: if they can prove that a single shot, dialogue, event from The Kashmir Files is untrue, I would stop making movies,”

“Will Bring The Whole Truth Through The Kashmir Files Sequel”: Vivek Agnihotri

While taking a stand for his movie, the filmmaker has announced a sequel to the movie titled The Kashmir Files: Unreported. While talking to Aaj Tak, he said: “We have many stories, anecdotes from which we could have made 10 films instead of one. I wanted to make only one film then. But now, I have decided that I will bring out the whole truth through ‘The Kashmir Files Unreported’,”

What do you think about the whole incident? Tell us in the comments below.