No one can deny that our society is obsessed with grades and marks. Rather than focusing on overall personality, kids are told to study hard to score good grades. And, what’s even sadder is how people are quick to label a student a failure if he/she has scored less. No wonder kids who score poorly are highly stressed about being judged.

Whenever people see someone successful, especially, IAS officers, they assume that IAS officers must have always been toppers in their classes. But, in recent times, many IAS officers have come forward to share their bad mark-sheet to prove that marks are the wrong indicator of one’s success and intelligence.

Here are some of these successful IAS officers, who are inspiring many with their bad mark sheets: 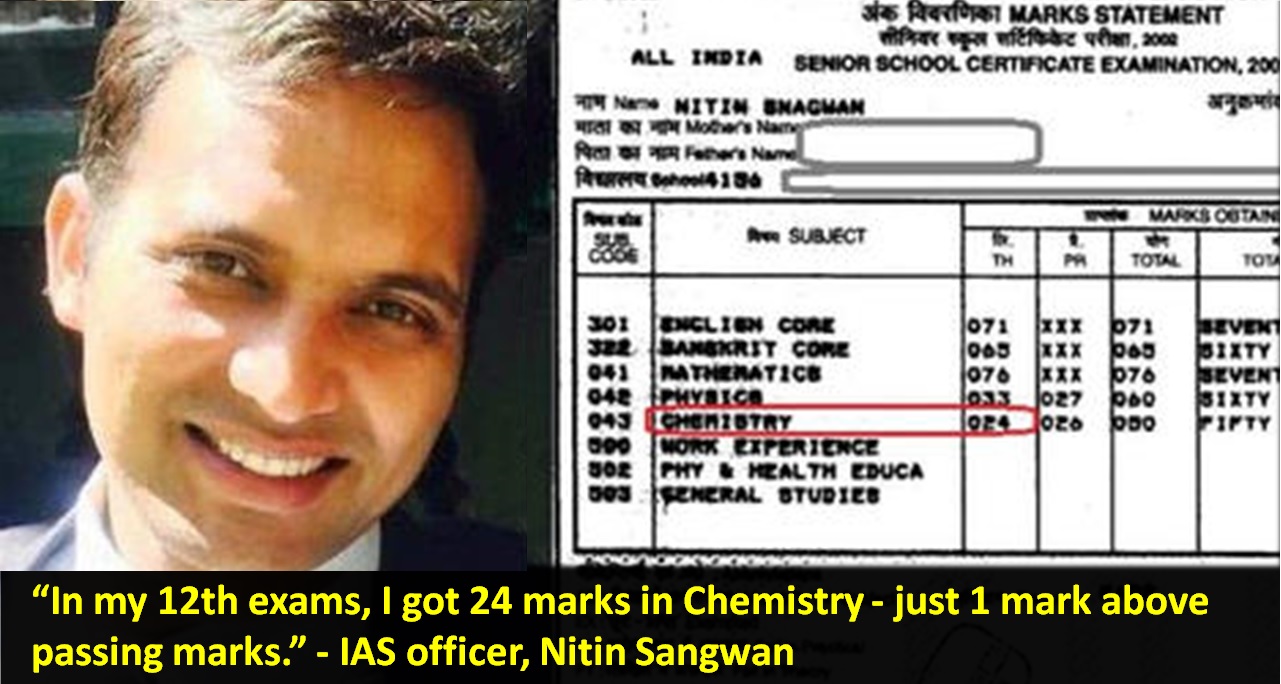 Awanish Sharan, a 2009-batch IAS officer of the Chhattisgarh cadre, shared his Class 10th mark sheet. He scored 314 marks out of 700 marks i.e. 44.85 percent. IAS officer Awanish Sharan passed out from the Bihar School Examination Board.

In another tweet, IAS officer Awanish Sharan shared the class 10 mark sheet of Tushar Sumera, who is the Collector of Bharuch in Gujarat. Along with Tushar Sumera picture, Sharan shared his mark sheet, in which he barely secured passing marks. He got 35 marks in English, 36 in maths, and 38 in science.

IAS officer Shahid Choudhary took to Twitter to share his Class 10 mark sheet. He shared the mark sheet with the caption, “On students’ demand, here’s my Class X Mark-sheet which has remained “classified” since 1997! 339/500,” he wrote. His mark sheet listed the marks he scored for his class 10 board exams. The mark sheet showed that he got 70 marks in English, 55 in math, and 88 in science, out of 100.

While supporting the students, another IAS officer, Nitin Sangwan shared his Class 12 marksheet, revealing that he scored only 24 out of 70 in Chemistry—only one mark more than the minimum required to pass the subject. While sharing the marksheet, he wrote, “In my 12th exams, I got 24 marks in Chemistry-just 1 mark above the passing mark. But that didn’t decide what I wanted from my life…Don’t bog down kids with the burden of marks.”

He further added. “We need to understand that success does not depend on a degree or marksheet…The final purpose of education is not to score marks.”

In my 12th exams, I got 24 marks in Chemistry – just 1 mark above passing marks. But that didn’t decide what I wanted from my life

Don’t bog down kids with burden of marks

Life is much more than board results

Let results be an opportunity for introspection & not for criticism pic.twitter.com/wPNoh9A616

It is quite inspiring how these IAS officers took to social media to share an important message for everyone. Focusing on marks is not everything, these people inspired so many to not be demotivated by their marks. As a society, we focus too much on marks. Are marks the correct indicator of one’s intelligence or success? What do you think? Tell us in the comments below.