Just Days After His Mother’s Death, 14-YO Boy Wins Global Award For His Painting on Moms & We Are Heartbroken

It was more than two years ago that Anujath Sindhu Vinaylal, a 14-year-old, completed the beautiful painting titled ”My mother and neighboring mothers”. But this young boy didn’t create it for any competition or contest. Rather he created this beautiful piece for his mother out of love.

But life had other plans. Hardly he knew this beautiful painting would win an international award and his best supporter – his mother won’t be with him to celebrate this special moment.

When Anujath’s painting won the international competition held by Shankar’s Academy of Art and Book Publishing, his father Vinaylal quietly put a status on WhatsApp about his son winning the award just days after the passing of Sindhu, Anujath’s mother.

He shared with a heavy heart how things have changed since they received the news about his son’s great achievement:

“She knew he got the award. The news had come earlier and she was quite happy about it. But by the time he got the certificate of recognition she had passed away. Sindhu had a heart problem.”

But, it isn’t the first time that Anujath made his mother and father proud.

Born as a natural artist, when Anujath was only nine, he got the Clint Memorial International Award for painting. And, many more awards followed including UN recognition in 2015 for paintings on the theme ‘We have energy’.

The proudest moment for the family was the honor bestowed on him from India’s former President Pranab Mukherjee. The family flew to Delhi to collect the National Child Award for Exceptional Achievement on Children’s Day in 2016.  The father shared with TBI:

“He won Rs 10,000 and books worth Rs 3,000, a silver medal, a certificate, and a memento. It was an honour for us to meet our President. We always knew Anujath was talented but accomplishing this at such a tender age was beyond our imaginations.”

This was Anujath’s last participation, after which he took a break for three years. During this time, Anujath painted only for himself:

“Painting gives me peace. I am transported to a different world every time I paint, and the best part is I can create my own rules and break the conventional routine.”

“With competitions, there is the pressure to perform and win. We did not want to impose this on him. His real happiness lies in drawing without any expectations. It was only after he convinced us that he loved the spirit of participation because it made him a better artist, that we returned to it.”

Anujath started painting when he was barely four, and it was his mother who identified his talent.

While sharing how it was none other than his own mother, who inspired his award-winning painting. Anujath shared:

“The idea to paint on mothers came from seeing her and other women like her work, in the kitchen and the rest of the house, all day long. It’s basically a collage of the activities a mother does all day.” 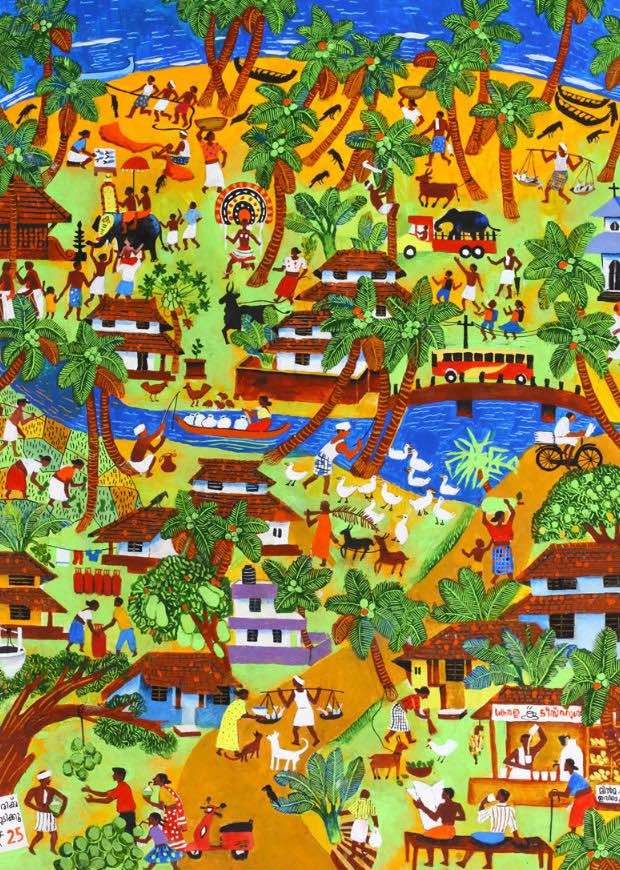 Recalling how Sindhu had liked the painting after he showed it to her, Vinaylal further added:

“As the Shankar Academy competition took art work in two categories – work of art that children sent, and on the spot contests. Since this painting on mothers was lying around, we thought we should send that.”

Though the result was announced when his mother, Sindhu, was alive, however, by the time certificate and medal arrived, she had passed away due to a heart condition. Today, the medal lies on her photo-frame, Anujath’s passion for painting has become stronger. Sharing his future plan with TBI, he added:

“My mother was my biggest cheerleader, and she would always encourage me to make each painting better than the previous one. With her faith and my father’s support, I hope to pursue this professionally after I complete my studies.”

It is never easy to lose a mother. But, bearing that pain at such a young age requires a lot of strength.

At IFORHER, we are in awe of this 14-year-old’s courage, who is utilizing the pain of his mother’s loss to power his passion for painting. We wish him loads of luck and hope his story will give strength to many more to battle their life struggles.