Losing a child is never easy. But what makes it even more difficult is to bear this endless pain without the support from the family. What we need is our society to not blame parents, but rather help parents overcome this grief.

Though many in our society blame the parents for their unborn child, a very small segment of our society understands the pain that the mother and father go through. Hence, many choose to suffer in silence, rather than talk about their pain.

But irrespective of judgments, a very few have shown the courage to speak about their miscarriages and the pain that comes along with it. One such couple is Kajol and Ajay Devgan, who has spoken about the miscarriages and how they coped through it with the support of their loved ones. 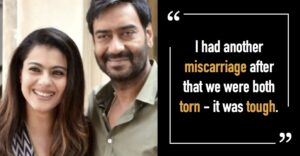 Kajol met Ajay Devgan almost 25 years ago on the movie set. Recalling how they finally got married to each other, Kajol recently shared with HoB:

“When we decided that we were ready to get married, we broke the news to our parents. We’d been together for 4 years and we wanted to take that next step. His parents were on board, but my dad was upset — he didn’t speak to me for 4 days. He wanted me to focus on my career, but I was firm, and he eventually came around. Again, there was no big proposal — just an understanding that we wanted to spend the rest of our lives together.

We got married at home, surrounded by family. We even gave the media the wrong venue because we wanted it to be our day. We had a Punjabi ceremony and a Marathi — so we actually got married twice! The funniest thing was that during the pheras Ajay was desperately trying to tell the pandit to hurry up and even tried to bribe him!”

But like any other marriage, it wasn’t the romance that made it stronger. Sharing how the feeling of care trumped everything else, Kajol shared:

“We’ve been by each other’s side through so much — we’ve formed our own company, Ajay’s on his 100th film, and every day we’re trying to build something new. Life with him is content — we’re not overtly romantic or anything — we care for each other.”

And one such incident when they have shown exemplary care and love for each other was when they suffered through a miscarriage. Though now the couple is blessed with two beautiful children, before this, Kajol suffered two miscarriages.

Before her family became complete, in 2001 Kajol was pregnant with her first kid. While talking about her miscarriages, Kajol shared:

“Over time, we knew we were ready to have children, and began planning. I was pregnant while I was filming for K3G, but had a miscarriage. I was in the hospital that day — the film had done so well, but it was not a happy time. I had another miscarriage after that and we were both torn…it was tough. But eventually, it all worked out — we had two great kids, Nysa and Yug, and our family’s complete.”

The reason for the first miscarriage was an ectopic pregnancy, a complication in which the embryo attaches outside the uterus. An operation was conducted on her. But Ajay and family stood like a rock with her. When Kajol returned from the hospital, Ajay Devgan mentioned how  for him Kajol was the utmost priority:

“Yes, we have lost our baby, but we have no regrets. it was an ectopic pregnancy. Kajol’s life was in danger. as soon as the doctors informed us that they would have to operate, we both gave them the go-ahead. Of course, both of us were thrilled when we learned of the pregnancy following a blood test. still, if not today, tomorrow we will look forward to starting a family.”

“Everyone in our families has been so supportive and concerned that I feel okay. Now, I just have to take it easy for a while and return to normal.”,

showing the world that family support is one major thing which helps to go through this difficult phase.”

Since Indian families mostly deal with miscarriages by brushing them under the carpet, many don’t have an option but to suffer in silence.

At IFORHER, we hope every couple going through this endless pain will gather the courage to move on with life and will receive similar support that this couple received. If you know someone who is struggling with miscarriage, please don’t let them suffer in silence. You don’t know what wonders your support can do to them!