These powerful ‘Never Give Up’ quotes will remind you not to give up on your dreams and fight for yourself and your passion. Here are some of the best ‘Never Give Up’ Quotes that we felt were quite inspiring! The reason why these are the best ‘quotes about not giving up’ is because they were spoken by people who stayed strong in the face of doubt and struggle, and emerged as winners. 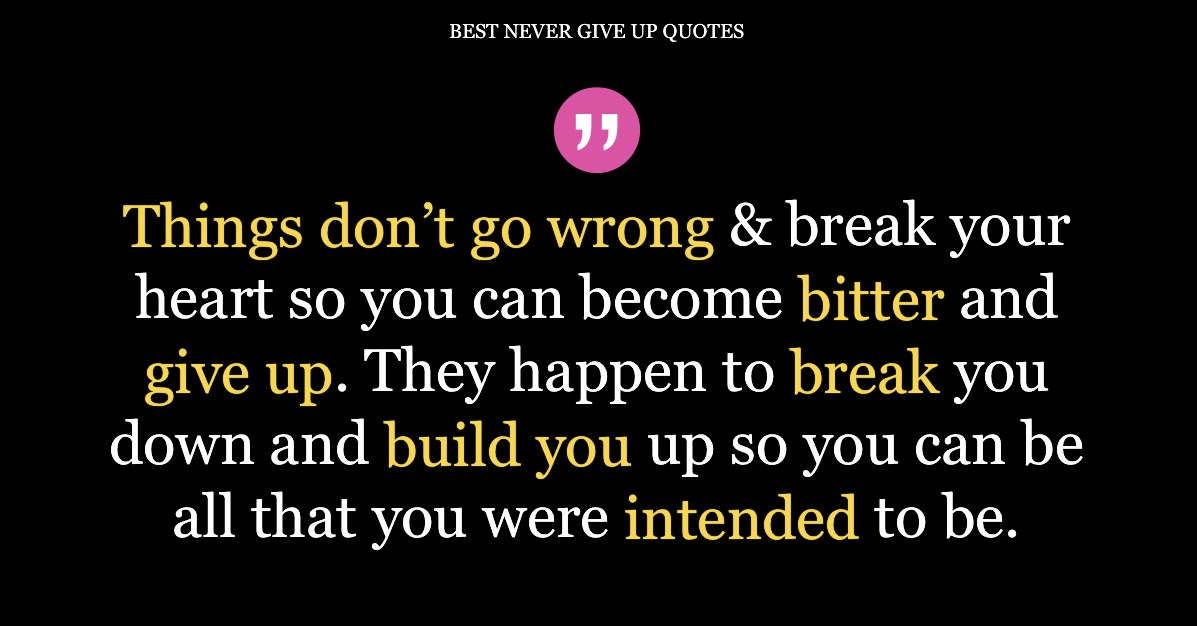 “Most of the important things in the world have been accomplished by people who have kept on trying when there seemed to be no hope at all.” – Dale Carnegie

“Life is like riding a bicycle. To keep your balance, you must keep moving.” – Albert Einstein

“When you are going through hell, keep on going. Never never never give up.” – Winston Churchill

“Never give up on something that you can’t go a day without thinking about.” – Winston Churchill

“Whatever course you decide upon, there is always someone to tell you that you are wrong. There are always difficulties arising which tempt you to believe that your critics are right. To map out a course of action and follow it to an end requires courage.” – Ralph Waldo Emerson

“Don’t let the fear of the time it will take to accomplish something stand in the way of your doing it. The time will pass anyway; we might just as well put that passing time to the best possible use.” – Earl Nightingale

“It’s not that I’m so smart, it’s just that I stay with problems longer.” – Albert Einstein

“It does not matter how slowly you go so long as you do not stop.” – Confucius

“Character consists of what you do on the third and fourth tries.” – James A. Michener

“Never give up, for that is just the place and time that the tide will turn.” – Harriet Stowe

“Many of life’s failures are people who did not realize how close they were to success when they gave up.”- Thomas Edison

“I am not discouraged because every wrong attempt discarded is a step forward.” – Thomas Edison

“How long should you try? Until.” – Jim Rohn

“You just can’t beat the person who won’t give up.” – Babe Ruth

“Things don’t go wrong and break your heart so you can become bitter and give up. They happen to break you down and build you up so you can be all that you were intended to be.” – Charlie Jones

“The world ain’t all sunshine and rainbows. It’s a very mean and nasty place and I don’t care how tough you are it will beat you to your knees and keep you there permanently if you let it. You, me, or nobody is gonna hit as hard as life. But it ain’t about how hard ya hit. It’s about how hard you can get hit and keep moving forward.” – Rocky Balboa

“Don’t give up. There are too many nay-sayers out there who will try to discourage you. Don’t listen to them. The only one who can make you give up is yourself.” – Sidney Sheldon

“Things aren’t always easy, but you just have to keep going and don’t let the small stuff bog you down.”- Stella Maeve

“Just because you fail once doesn’t mean you’re gonna fail at everything.” – Marilyn Monroe

Hope these quotes will give you the courage to fight for yourself and never give up!