From playing a young wrestler in her debut film (Dangal, 2016) to a young widow in her latest release Pagglait, the versatile actor Sanya Malhotra is rapidly carving out a legacy for herself . That too in an industry which has not always been welcoming to outsiders. Things haven’t been any easy for the 29-year-old though. Sanya Malhotra came from New Delhi to Mumbai to participate in reality show Dance India Dance. And while she did not make it past the Top 100, she stayed back in the city of dreams chasing her own ambitions of making it as an actor.

What happened next was a long series of rejections. But Sanya never gave up. Finally things took a positive turn and Sanya emabrked on the journey to give us some very heart-touching movies – like Dangal (2016), Pataakha (2018), Badhaai Ho (2018), Photograph, and now Pagglait.

We are celebriting Sanya and her courageous spirit with some of her inspiring words.

“It’s important to set healthy boundaries for yourself. If people don’t get it, then it’s not your headache.”

“Nobody’s perfect, but that doesn’t mean you can’t try!”

“I am so self-critical. I beat myself up the moment I do something wrong… So, I don’t give anyone else a chance. I don’t like my work.”

“I cannot play a disrespectful projection of women because I believe in gender equality. Having said that, not everyone gets the concept of feminism, especially in our country.”

“I feel in today’s time, you are truly successful if a meme is based on you.”

“I think there’s no concept of ‘stars’ or ‘big’ and ‘small’ actors. Content is king. It’s important to have a strong script, and that’s what the audience prefers too. They like films that have good content.”

“Womanhood needs to be celebrated every day.” 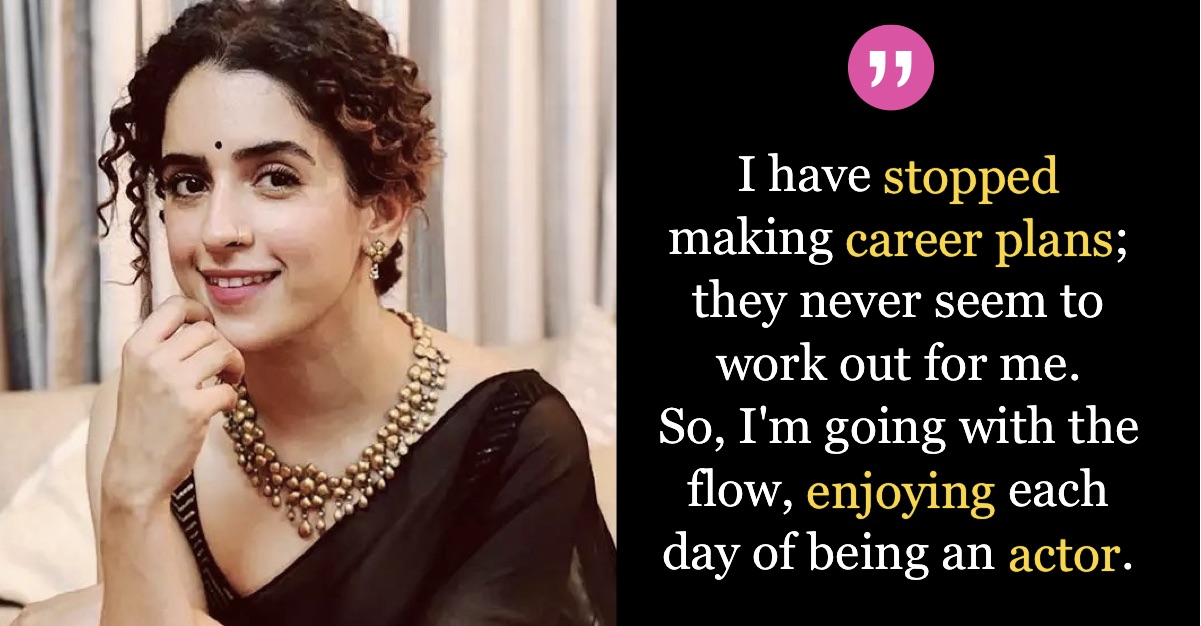 “I have stopped making career plans; they never seem to work out for me. So, I’m going with the flow, enjoying each day of being an actor.”

“On a film set, where there is so much chaos, I find inner peace.”

“When I came to Mumbai to audition for a dance reality show, I was in the top 100. I doubted myself and did not get through. It was a lesson for me… After that day, whenever I used to go for auditions, I never doubted myself.”

“I have never experienced death so closely in my life. But at the cost of sounding too philosophical, I have to admit that after finishing the shoot, I realized that I learned a lot from Sandhya and her journey. It was an emotional and life-changing experience for both of us, because the character learns how to let go and move on in life.”

“We can’t build anything in a day so I learned to be patient and authentic, two essential traits that helped me be who I am today.”

“Women are constantly being judged. Right from our childhood, we are robbed of our agency. People decide what we should wear, what time we should go out and come back, what kind of makeup and hair we should opt for, and how we should appear. But, at some point in time, we need to break the wheel and take our own decisions. As my character Sandhya says in Pagglait, ‘Agar main apne faisle khud nahi lungi toh koi aur le lega’.”

At IFORHER, we are in awe of Sanya. We wish her luck for all future  endeavors and hope she will keep inspiring us through her powerful performances!