You Want Your Daughter To Be Treated Like Queen, But Treat Mine As Maid? -Open Letter By Father

A heartwarming letter from a father to his daughter’s in-laws. People who treat their daughter with so much love, care, and respect while his daughter gets a treatment worse than an educated maid. This post by our community member captures the hypocrisy – how we treat our daughters and daughters-in-law so drastically different! 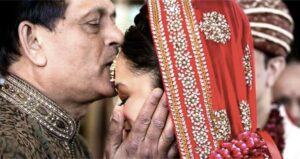 Being a loving parent to your daughter, I always believed that you would understand the real value of daughters. When I saw you caring so much about how your daughter’s happiness, I always felt that I am handing over my daughter to the perfect family.

The way you cared about your daughter’s education and career, made me feel you are the real champion of women in our society. Without thinking twice, I agreed to my daughter’s wish to get married to your son.

It was never your financial condition that touched the heart of this father, it was always how you were treating your daughter as I treat mine.

But, one blunder that I committed was to believe you when you said you will treat my daughter as your own.

I thought even if you treat her half good as you treat your daughter, then my daughter would never be unhappy in this marriage.

But, I was so wrong. I forgot that a daughter-in-law can never become a daughter.

Because even maids are treated with respect. But you treated my loving daughter as a punching bag – who was told time to time how she wasn’t good enough or how she lacked basic family values and needed to learn from your daughter or son.

But, here’s what bothers me.

Your son and daughter can come late home after meeting their friends or attending office parties. But, my daughter can’t?

If your kids stay at the office and work late, they are so hardworking. But, if my daughter does the same then she is irresponsible and careless towards family!

Your son and daughter can get as much sleep as they want, but if my daughter slept a little more on weekends, then you start judging her. You would taunt her of being careless and how much others had to work because of her sleep, how she is now married, how other daughters-in-law are so particular and responsible.

You made my daughter believe that she did not deserve to sleep. But, why different rules apply to my daughter and yours.

If she spent some more time with her friends, she would hear 10 things or get cold treatment in the morning.

What aches my heart is while I was lecturing her to treat you as her own parents, you were treating her worse than a second class citizen. Are parents like that? Do they treat one child like a princess, and another child as a maid?

Do you remember the time when your son was late by an hour to take my daughter to a doctor’s visit? While he apologized to her for being late, you told him in front of the whole family:

“You don’t look good seeking sorry from her. You were working only. She should understand.”

It broke my heart how you treated my daughter as a constant matter of embarrassment for you.

If she laughs or says something, it would embarrass you. You won’t let her dance or laugh loud, be the “BAHU”, you will say. But, when other people in the family, especially your daughter did the same things, you were always so happy and excited!

Why treat my daughter so differently?

While my daughter is standing for herself, she doesn’t even expect you to treat her like your daughter anymore. And the treatment that she got from you is not going to let her treat you like her own parents.

Next time you treat your daughter like a queen and my daughter as a maid, please remember how would you feel if your queen is just treated the way my daughter has been treated! This thought may give you a cinch of the idea of how much pain parents feel when their kids are not treated right. I hope you never have to encounter the pain that you gave to me by mistreating my daughter!