Son Shares How His Mother Manipulates Him Against Wife, Sad Reality Of Many Indian Families

Many women have come forward to share their real-life experiences of living with their mothers-in-law. They have been very vocal about how their mothers-in-law tend to control their sons. But, we have hardly come across any son speaking about the issues that he and his partner face because of his manipulative mother.

Recently, we stumbled over one such discussion thread on Reddit, where a son alleged that his mother is trying to manipulate him against his wife. He shared how the two had an arranged marriage after meeting via a matrimonial site. The husband and wife currently live in two different cities, owing to their jobs, which the mother doesn’t like.

In this thread, he mentioned: “I met my wife last year through a matrimonial site. We spoke and managed to meet a couple of times during the pandemic and finally said yes. We live in two different cities of India and we are planning to switch depending on whoever finds a new job will move to another person’s city. Right now she is living at her mom’s place which my mom doesn’t like but she cannot do anything about it.”

The son further shared that his mother has been “harassing” him by calling him “Joru ka Ghulam” and “Ghar Jamai”.

“Since the wedding, my mom has been harassing me picking out tiny things that I or my wife did and calling me things like Joru ka Ghulam (wife’s servant) and ghar jamai (the person who lives with his wife’s family). I had a couple of arguments with my mom but it didn’t result in any peace.”

He even shared how his manipulative mother lied to him about his wife.

“Wife calls my mother on weekends. Last week my mom told me that she hasn’t spoken to her since the last two weeks. When I told her that I’ll ask the reason, she changed her statement to that she called I didn’t pick and she didn’t call back. Anyhow when I spoke with wife, and casually asked if she has spoken to mom she said yes, we spoke yesterday. I was shook. I told this to my brother and even he knows that they have spoken a couple of times.”

“I don’t understand what is the point of manipulating me like this. What will be the point of making a newly married couple fight for no reason?” the guy questioned.

Many netizens came forward to share how his mother is feeling insecure – since her son now has a wife, he might begin to get distant from her.

Some suggested that the son needs to stand up to his mother and confront his mother.

And, some also suggested that they should live separately. 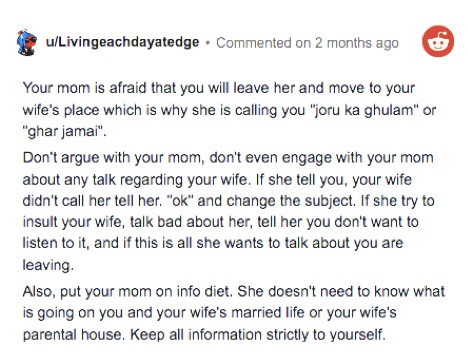 What do you think about the incident! Share with us in the comments section below!