These intelligent & clever jokes will tickle your brain and bring a smile to your face.  Like dark humor jokes, intelligent jokes are not a cup of tea for everyone. But if you like smart humor,  then you will definitely enjoy this best collection of intelligent and clever jokes! 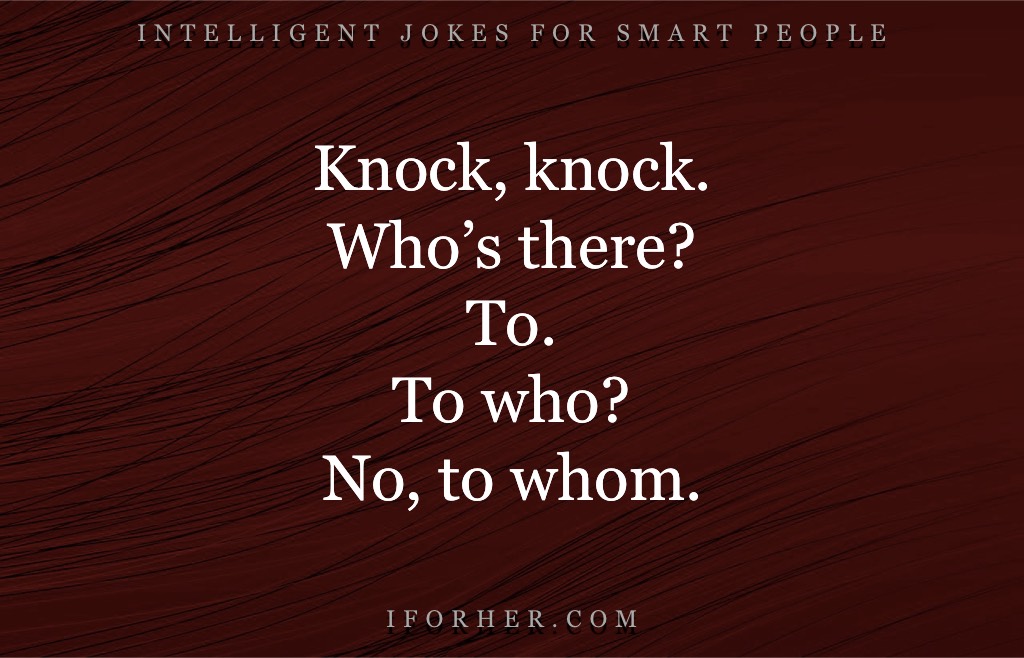 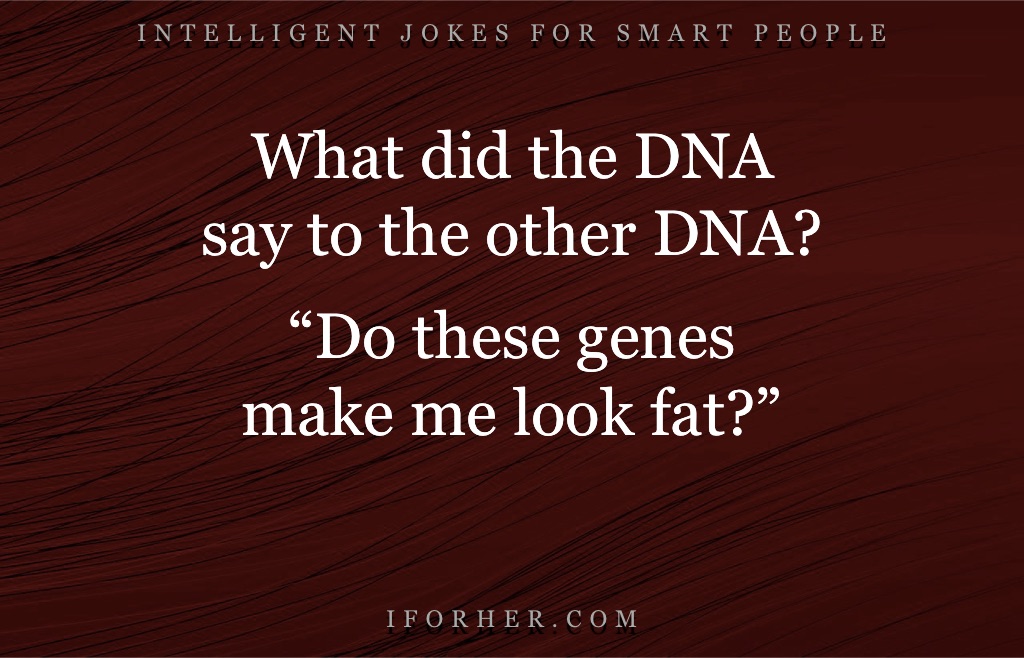 What did the DNA  say to the other DNA? “Do these genes make me look fat?” 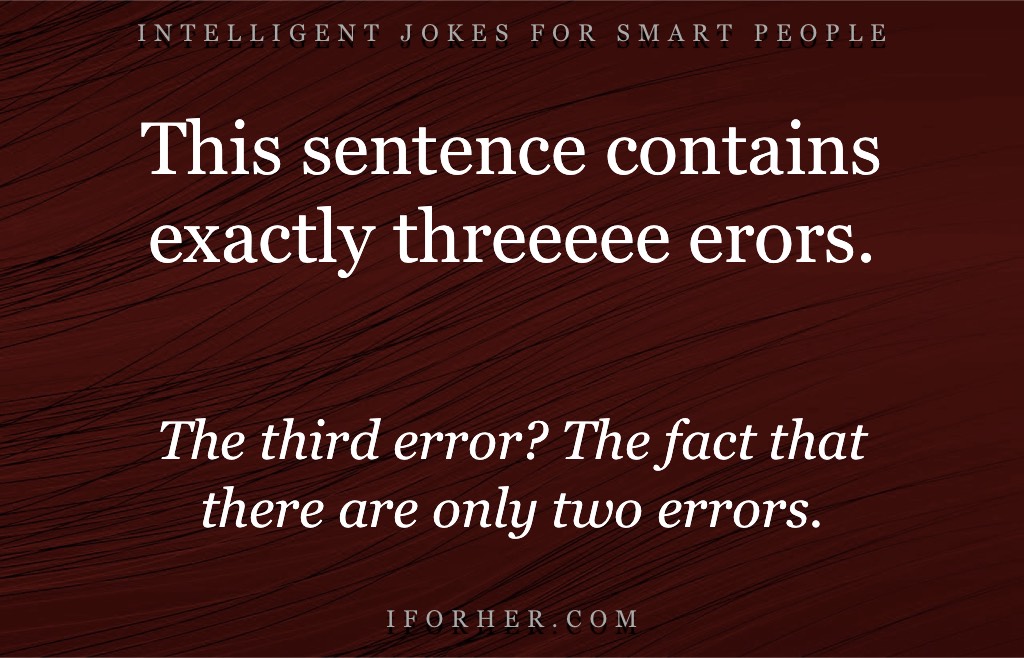 This sentence contains exactly threeeee erors. The third error? The fact that there are only two errors. 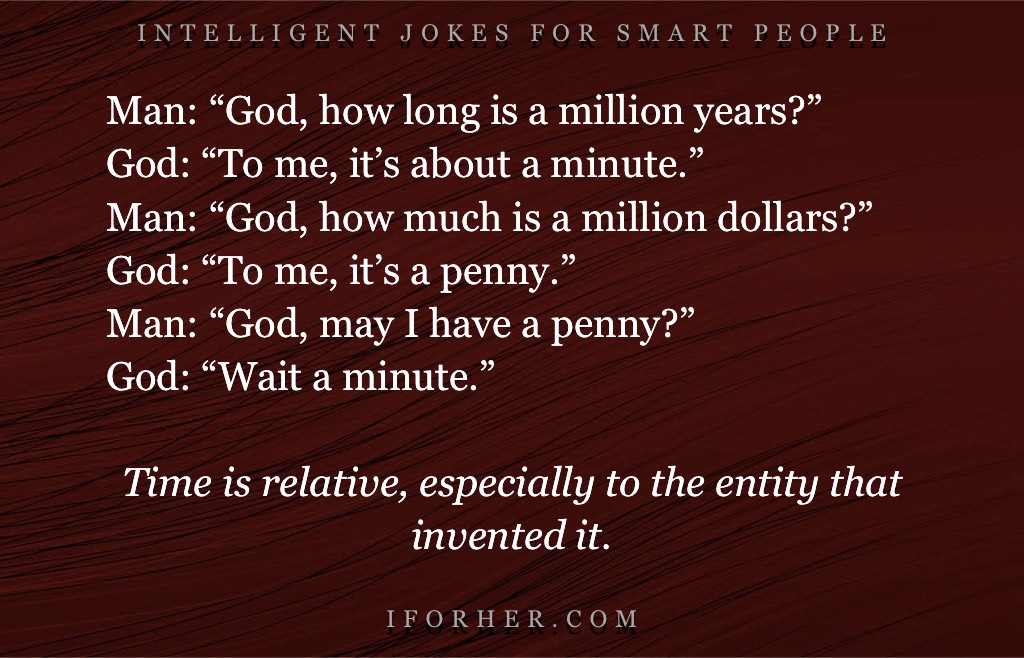 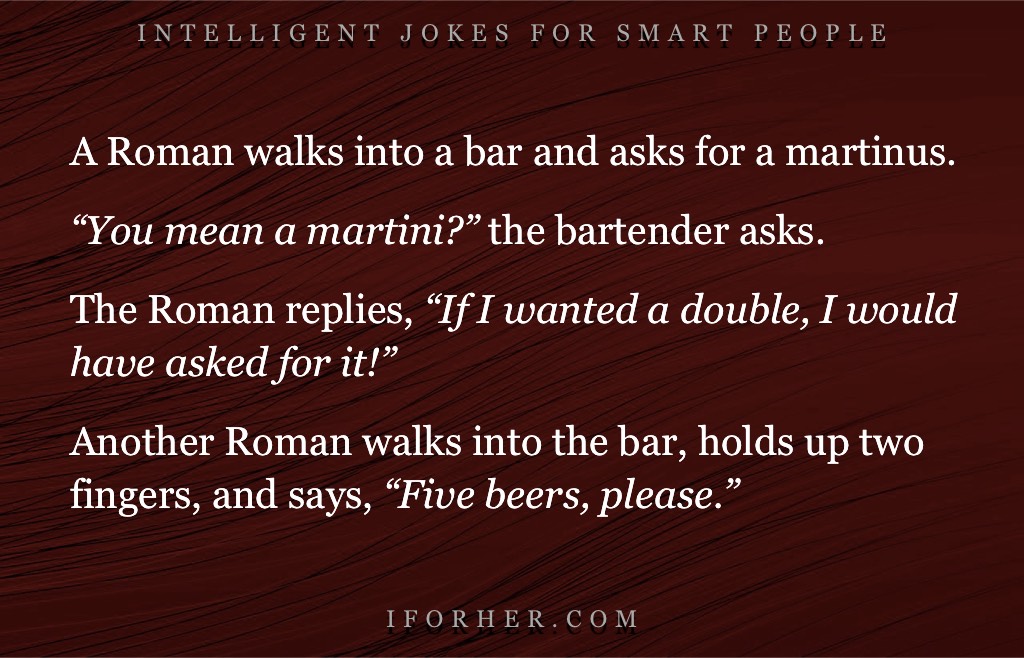 A Roman walks into a bar and asks for a martinus. “You mean a martini?” the bartender asks. The Roman replies, “If I wanted a double, I would have asked for it!” Another Roman walks into the bar, holds up two fingers, and says, “Five beers, please.” 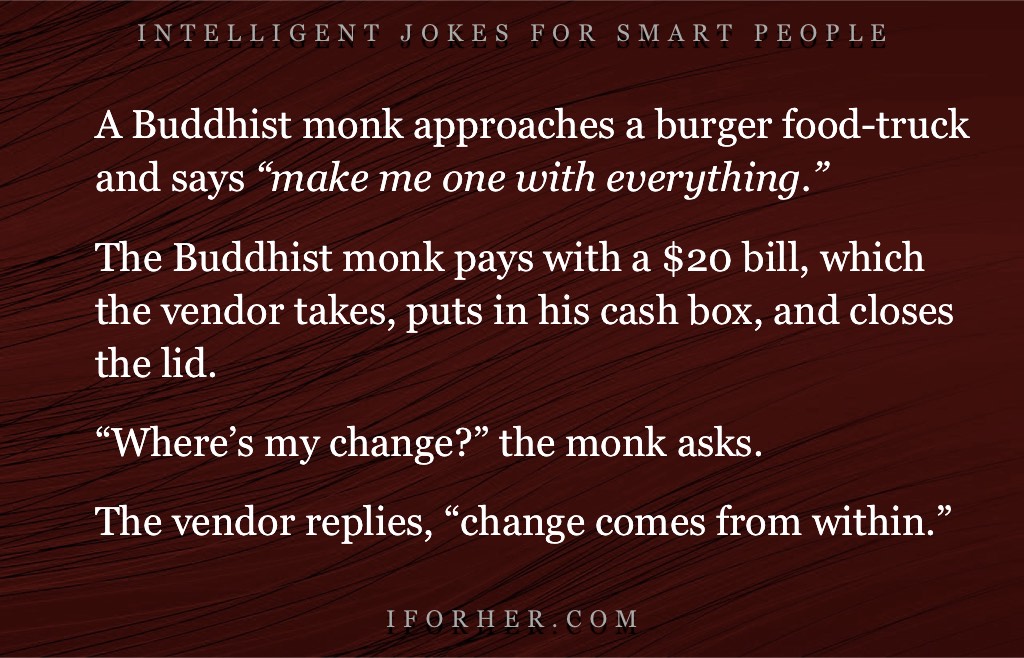 A Buddhist monk approaches a burger food-truck and says “make me one with everything.” The Buddhist monk pays with a $20 bill, which the vendor takes, puts in his cash box, and closes the lid. “Where’s my change?” the monk asks. The vendor replies, “change comes from within.” 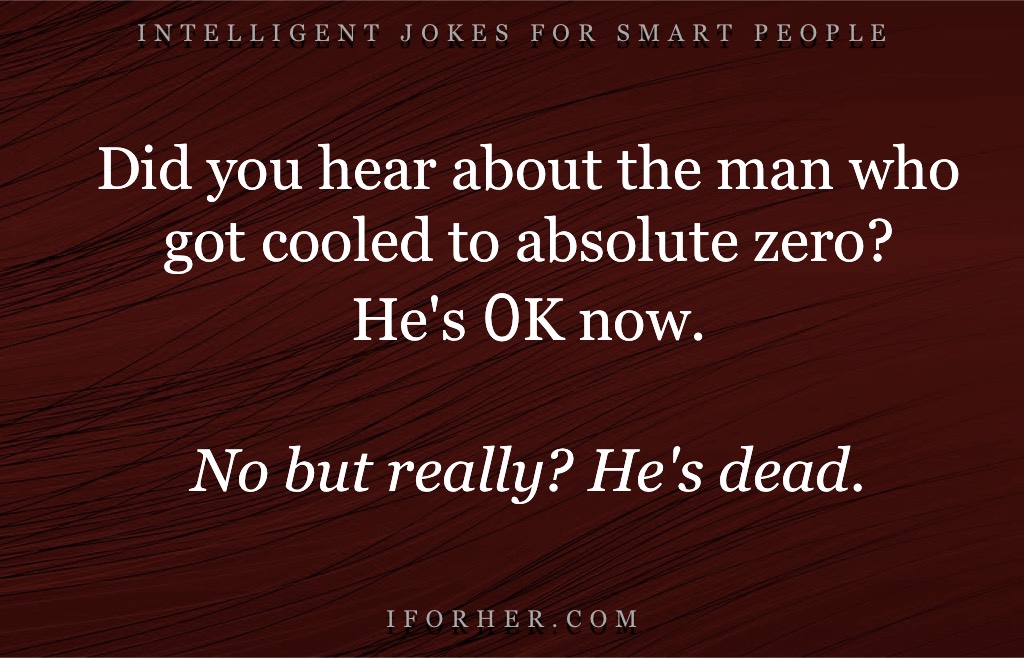 Did you hear about the man who got cooled to absolute zero?  He’s 0K now.  No but really? He’s dead. 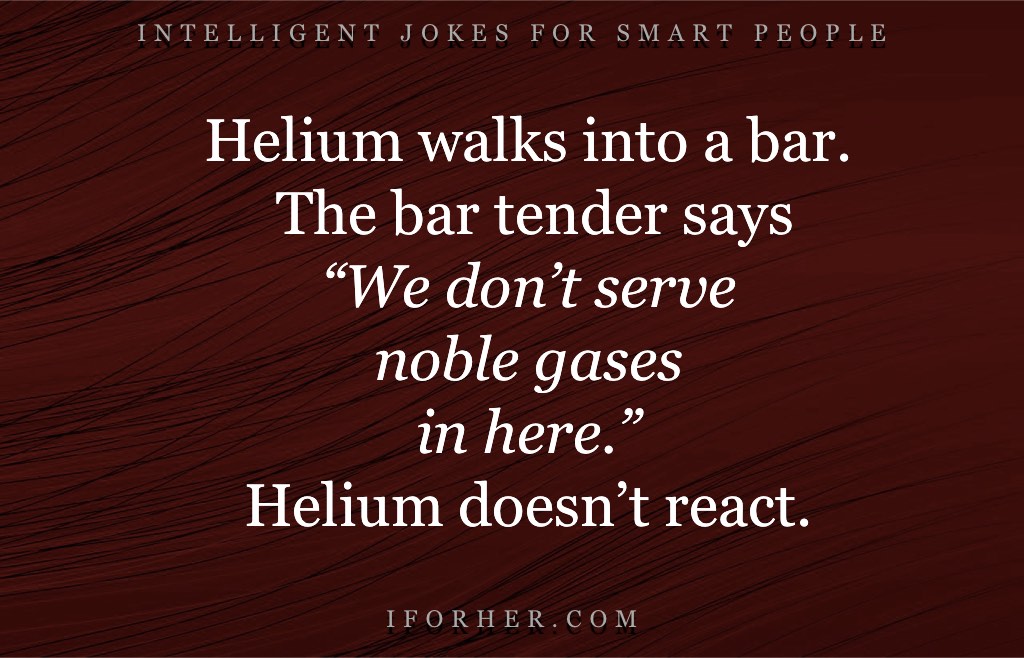 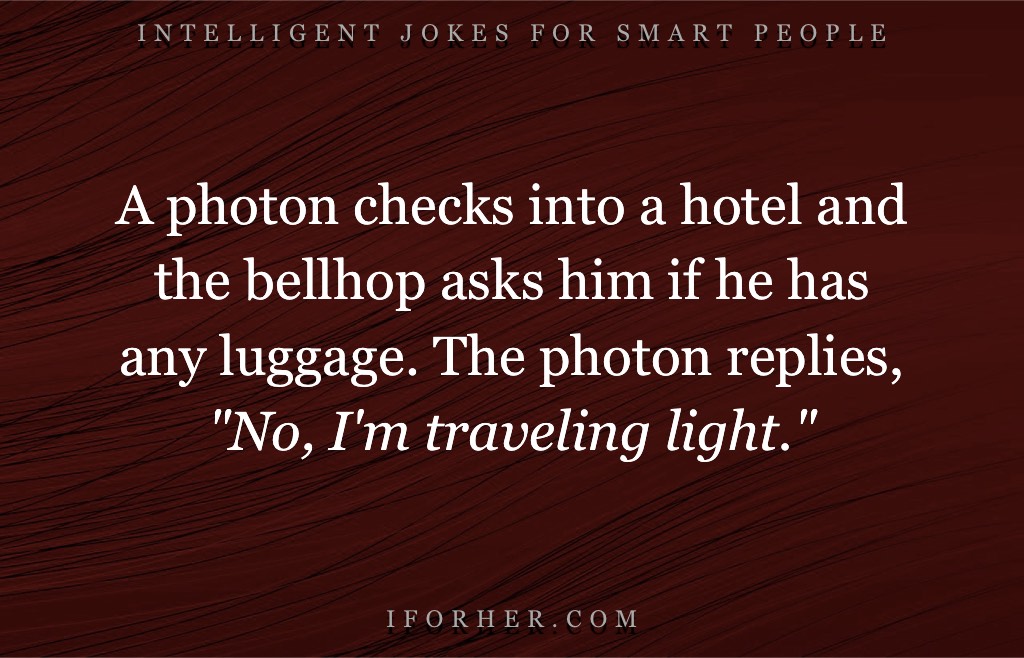 A photon checks into a hotel and the bellhop asks him if he has any luggage. The photon replies, “No, I’m traveling light.” 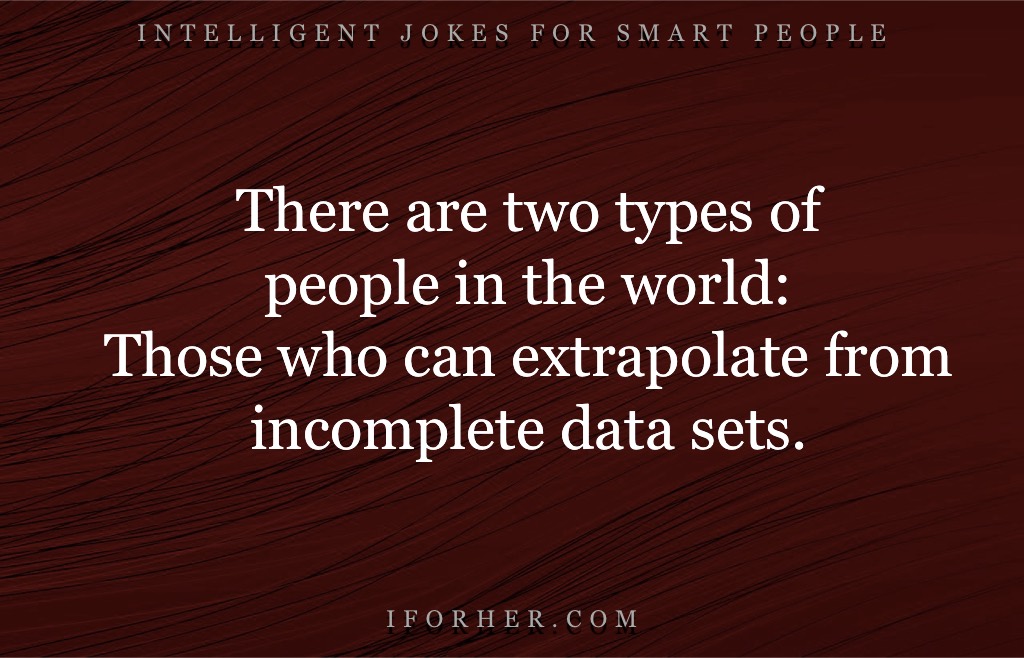 There are two types of people in the world: Those who can extrapolate from incomplete data sets.

How can you tell the difference between a chemist and a plumber?  Ask them to pronounce “unionized.” A plumber would say – ‘you-niun-ized’,whereas a chemist would say- ‘un-ayon-ized’. 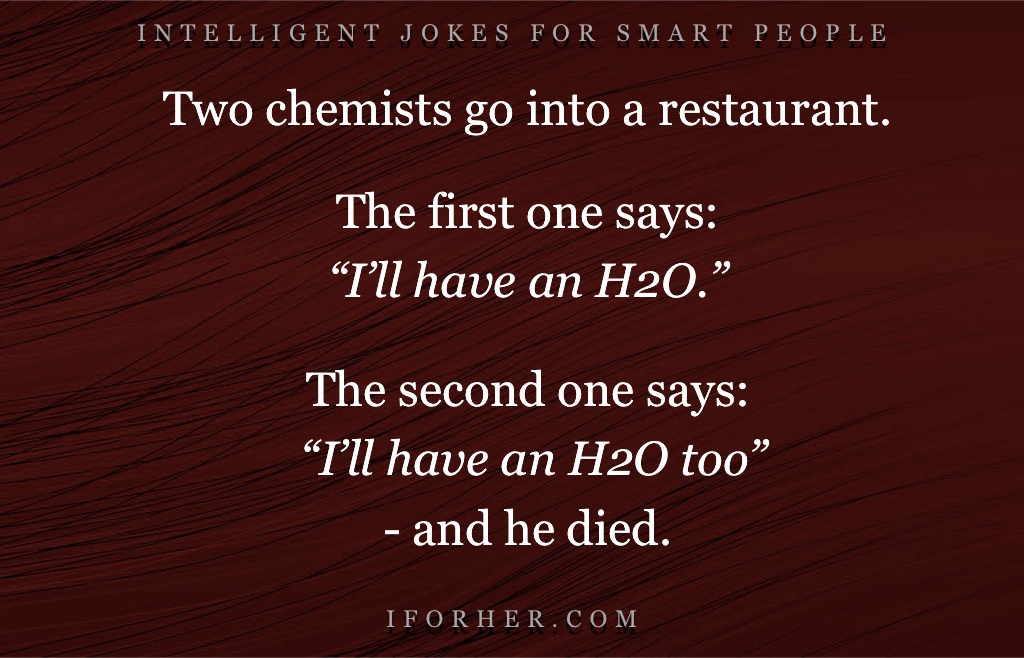 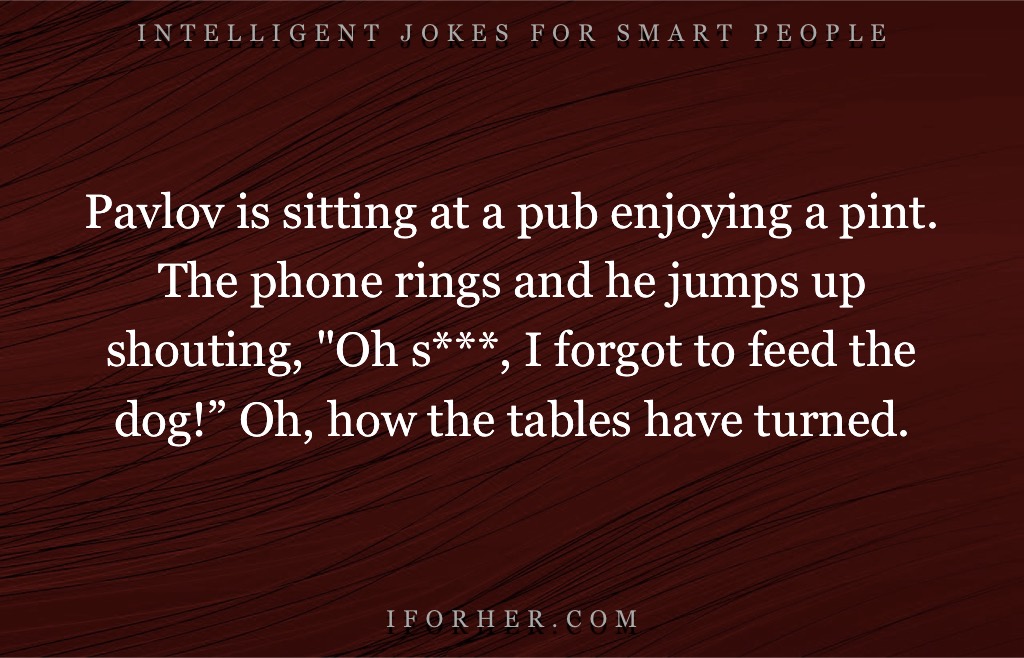 Pavlov is sitting at a pub enjoying a pint. The phone rings and he jumps up shouting, “Oh s***, I forgot to feed the dog!” Oh, how the tables have turned. 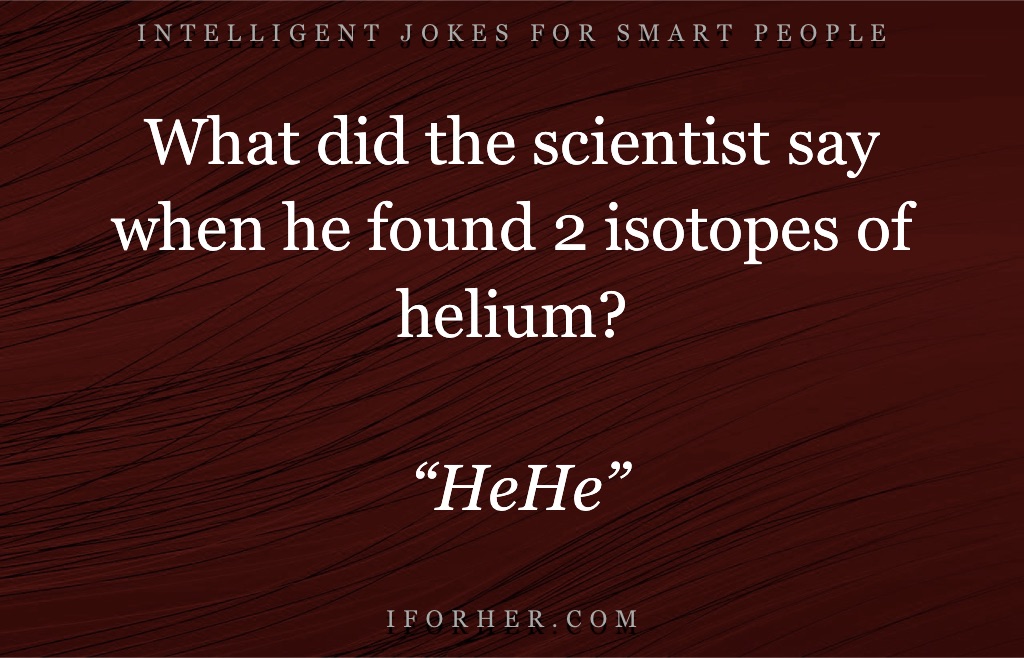 What did the scientist say when he found 2 isotopes of helium?“HeHe” 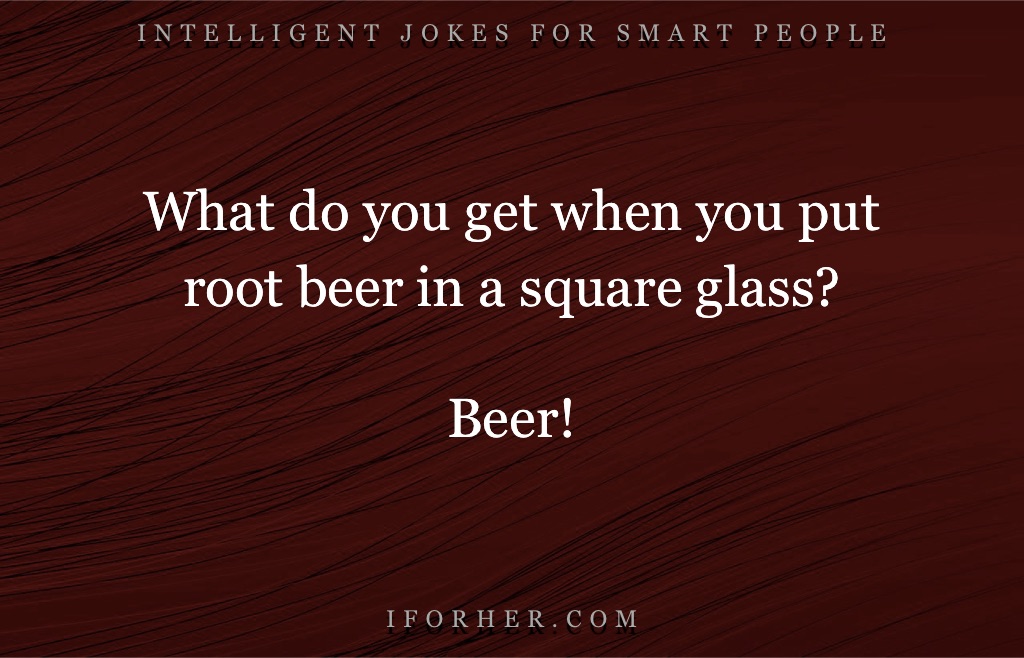 What do you get when you put root beer in a square glass? Beer! 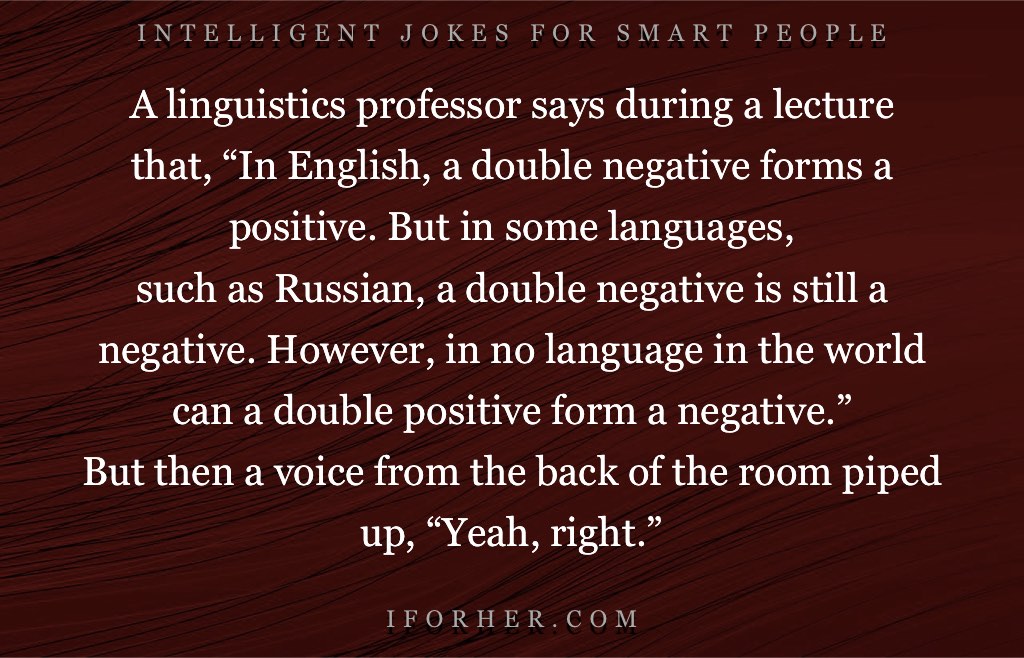 A linguistics professor says during a lecture that, “In English, a double negative forms a positive. But in some languages, such as Russian, a double negative is still a negative. However, in no language in the world can a double positive form a negative.” But then a voice from the back of the room piped up, “Yeah, right.” 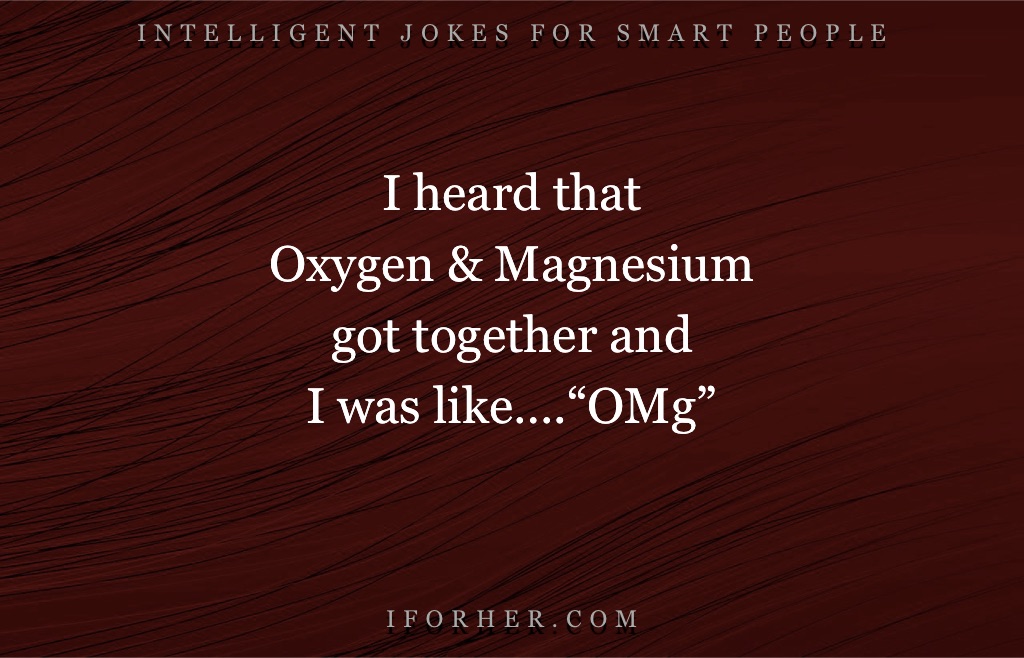 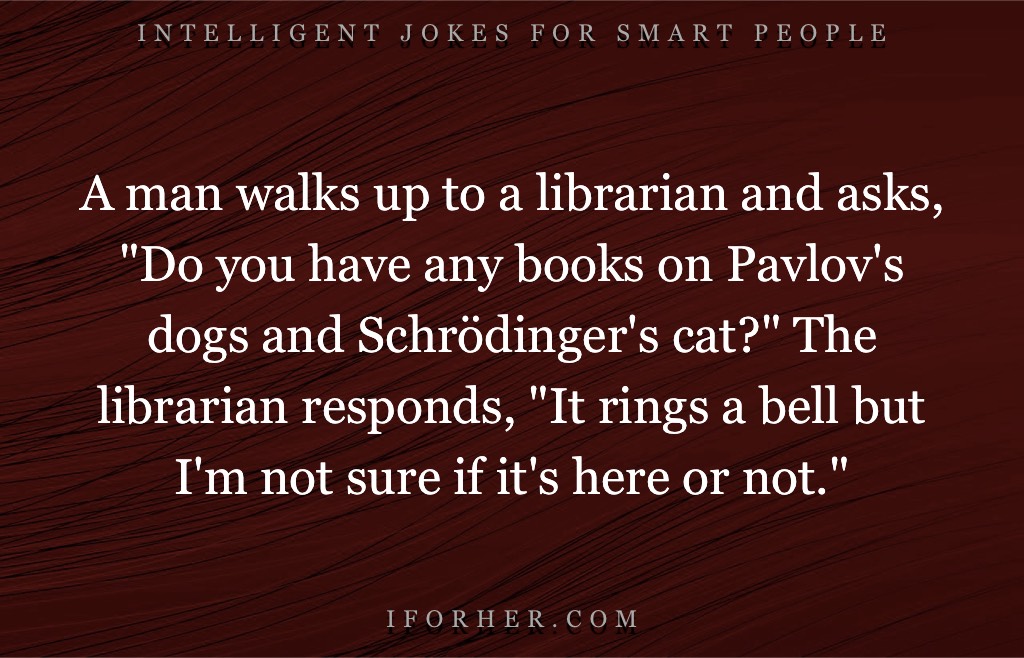 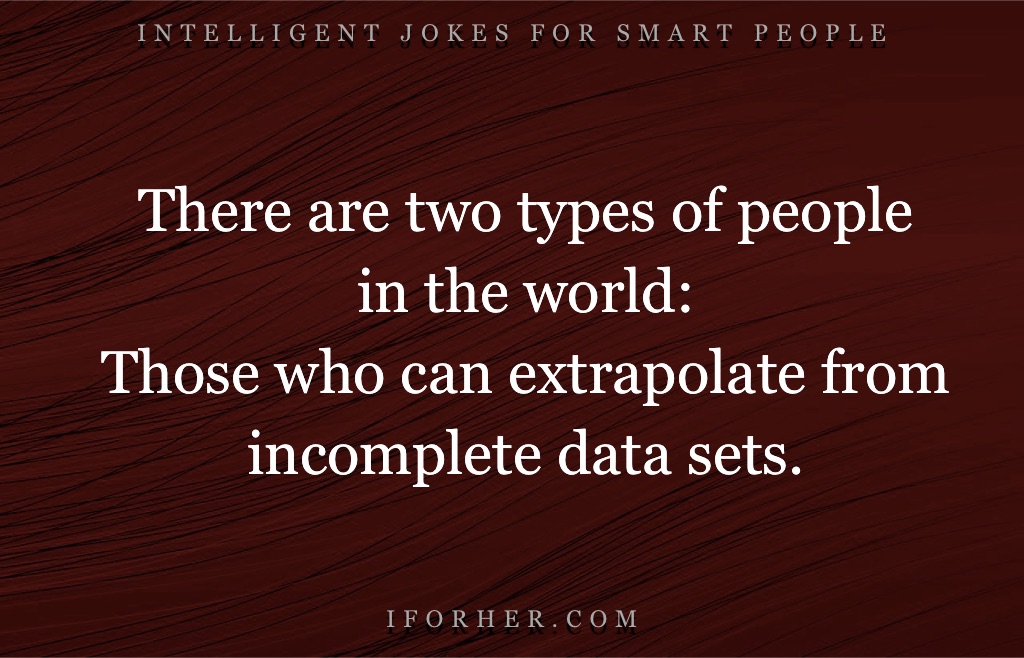 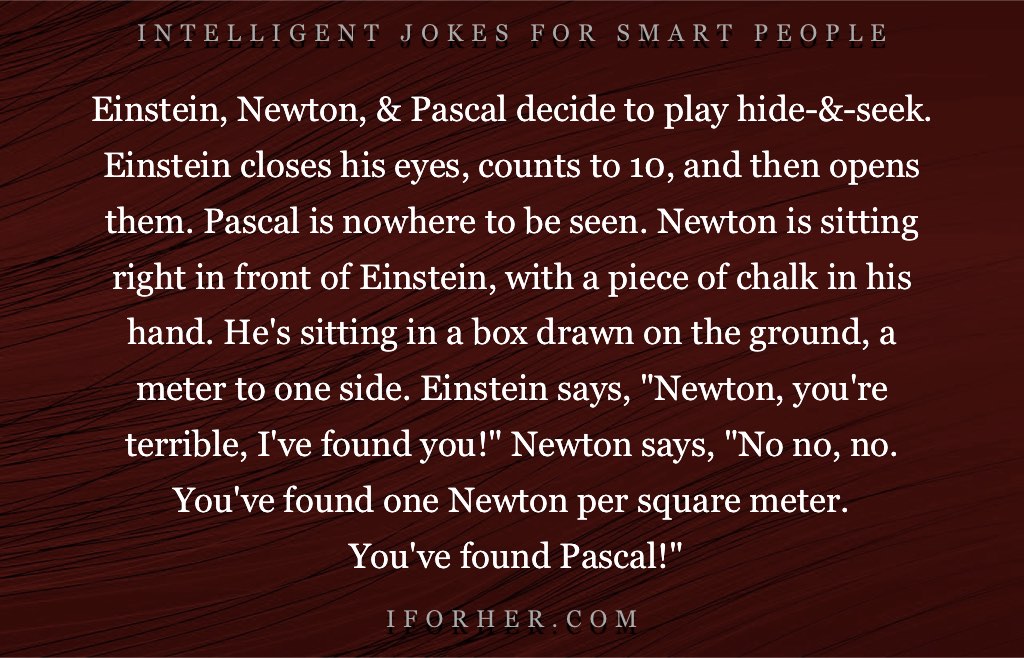 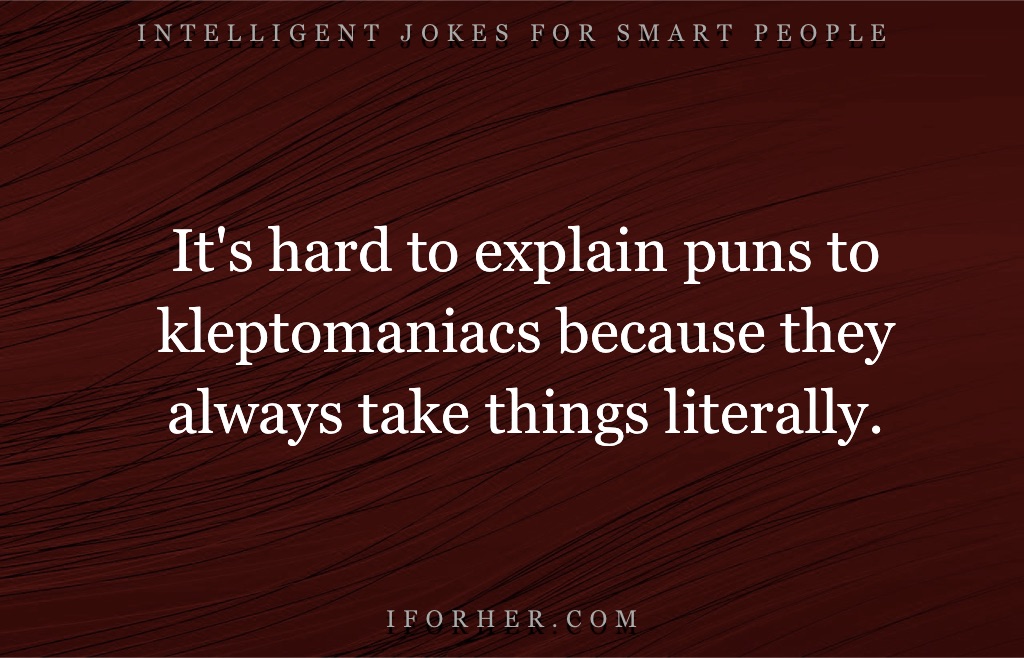