15 Traditional Indian Games That Defined Our Childhood Of Many Generations

Here’s the list of traditional Indian games that made many childhood memorable!

Childhood evokes a lot of memories for everyone – good & bad. Memories of schools, friends, games played, mouth-watering aromas of grandmother’s/mother’s cooking – who doesn’t want to go back to those carefree days.

As kids, we used to play a lot of outdoor as well as indoor games. Everyone used to thoroughly enjoy these games. We used to play these more on a friendly playful basis rather than the competitive streaks that we see today. Today, most kids spend time on video games, television, and tablets and don’t prefer to play outdoors. Even if they play outdoors, they always play usual games like cricket, football, etc. As a result there are a lot of traditional Indian games, that we used to play during our childhood, have been forgotten. 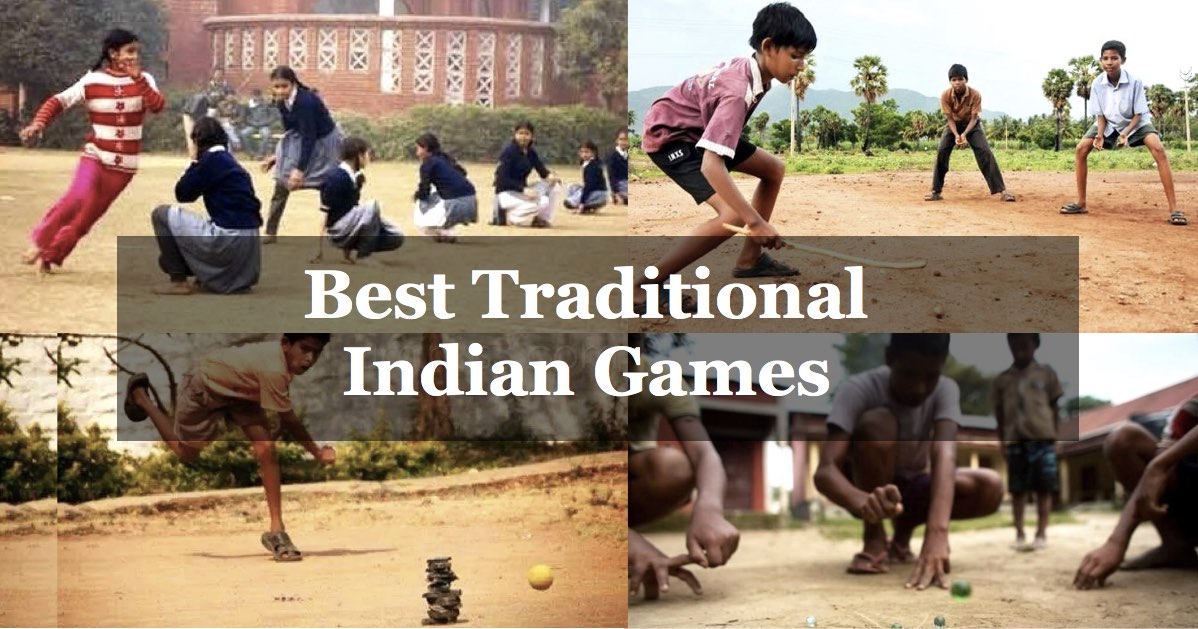 Here we are listing a few of traditional Indian games that existed in India and hope these get revived in the new generation.

1. Lagori/Pithu
It was one of the most popular games among kids in India at one time. It involves a ball and a pile of flat stones which are stacked on top of each other. One member of a team throws the ball at the stack intending to knock the stones. The team then tries to restore the pile of stones while the opposing team attempts to throw the ball at them. If the ball touches a person, s/he is out and the team has to continue without him. If the pile can be built again before all players are stuck out, the throwing team wins. Otherwise, the team hitting the opposite team wins. Here’s a video of how to play this game.

2. Kancha/Marbles/Gotti
One of the most played traditional Indian games that touched many childhood is Kancha/Marbles/Gotti. This is still played in many villages of India. One needs to round glass marbles also known as Gotti. The motive of the game is to collect as many marbles as possible by shooting and striking other’s marbles with the ones you have.

3. Gilli Danda
This is a game similar to cricket or baseball. Gilli is a small wooden piece reduced at both sides, and Danda a large piece of wood that is used to hit the Gilli. The motive of the game is to hit the Gilli as far as possible using the Danda. Here’s a video that explains how to play Gilli-Danda.

4. Kho Kho
The second most popular game played during childhood would be Kho Kho. There are 2 teams, the players should chase and tag the players of the opposition to win the game. Nine players of one team sit in a straight line with alternate players facing opposite sides. The opposition then sends a player one at a time and the sitting team should catch the opposition players before time runs out.

6. Langdi
Langdi is a popular childhood game, especially in the state of Maharashtra. The game consists of two teams. By toss, two teams decide which team will send a player first. The team that loses sends a player who hops on one foot and tries to tag other team members. The team that tags most people from opponent team wins first.

7. Vish Amrit
It is the Indian version of the game “lock and key”. The denner aims to touch the other players, giving them vish(lock). The person who has been locked cannot be released unless other players give the key or Amrit. The game ends when all players have been caught and there is no one left to give Amrit (key)

8. Maaram Pitthi
It consists of two teams, who have gathered around in a large area. Players from a team try to hit players of the opposing team with a ball (usually made of sponge). Once a player is hit, he is out of the game.

9. Dog and Bone
The game consists of two teams, and an object such as a bottle or handkerchief, etc., which is designated as the “bone”. The “bone” is placed at the center and 2 players, one each from a team comes forwards and attempt to take it before the other player does. The player who fails to take the bone has to go out of the game.

10. Kabaddi
Kabaddi is an Indian-origin game that was on its way to extinction, but is now regaining its popularity thanks to the Pro Kabbadi League. There are several variations of the game, but most involve two teams of seven players each, who have a designated area of their own. Players have to raid the other team’s area and try and touch one of their players, aiming to make him/her out.

11. Hide and Seek
Hide and Seek is a popular children’s game in which players hide themselves in a marked area, to be found by one or more seekers/denners. The denner closes his eyes and counts till a certain number, after which he tries to find the hidden players.

12. Chor-Sipahi
The game is the Indian version of “Tag.” There are two teams in the game – one team of thieves called chor and the other team of sipahi which is the police. The sipahi tries to catch the chor, after which the turn changes.

13. Four Corners
Four corners is a game often played by primary school children. Four corners are designated, and a player is chosen as being “it”. The players should swap positions among themselves without being caught by “it”. The person who is caught by “it”, should leave the game.

14. Hopscotch
Hopscotch is a popular playground game in which players draw rectangles on the ground with chalk. The player throw a stone into the air which should fall into the reactangle. The player then hops or jumps through the rectangles on one or two legs to retrieve the object.

15. Lattoo
Lattoo means wooden spinner. A thick string is wrapped around the grooves on lower half and pulling the string makes the top spin. The person who makes the top spin for the longest time is the winner.

Hope these traditional indian games would not get extinct in the time of digital age.