Here’s the list of the best Hindi web series that made us ditch the Bollywood silver screen without any regret! These Indian web series left a mark because of their compelling storytelling, heart-touching characters, and great acting skills.

Thanks to OTT things have changed drastically in the entertainment industry. With intelligent content and powerful storytelling, many Indian web series convinced us to ditch Bollywood’s senseless movies for good. So, here’s our pick of the best Hindi web series that you can’t afford to miss. 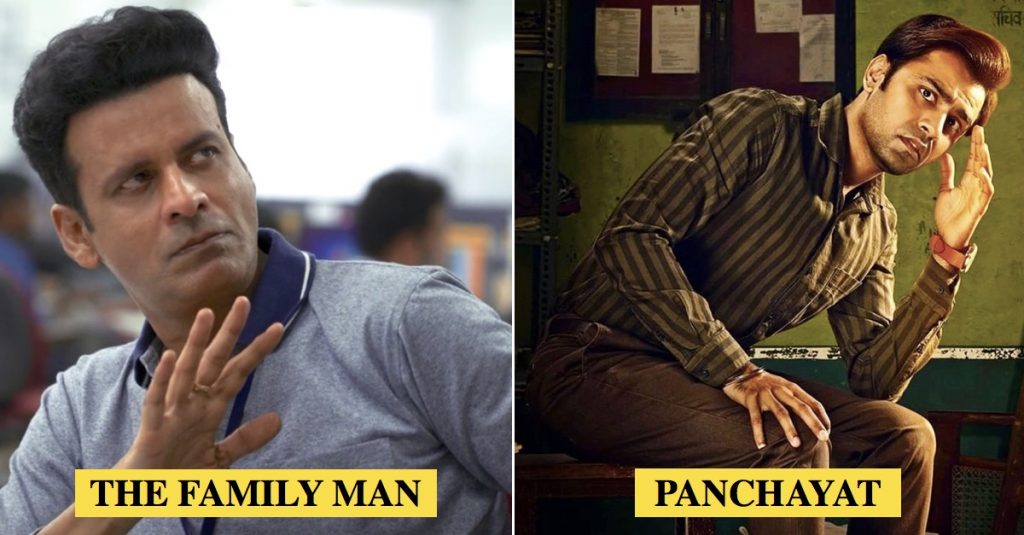 Scam 1992 tops our list of best Hindi web series: Set in the 1980s and 90’s Bombay, it follows the life of Harshad Mehta, a stockbroker who took the stock market to dizzying heights followed by his catastrophic downfall. Everything from its theme music to its simplification of technical jargon, to its choice of filters, worked in the show’s favor. You can watch it here.

The next on our list of best Hindi web series is Kota Factory, India’s first black-and-white web series. This powerful web series presented a hilariously honest story of the infamous coaching institutes of Kota, and the rat race to clear the IIT-JEE engineering examination.  You can watch it here.

Next on the list of Indian web series is Gullak – a refreshingly hilarious and undoubtedly nostalgic series. This heart-touching show was like peeking through your childhood album and revisiting the incidents that made up our childhood. All seasons of Gullak are available on Sony Liv. You can watch them here.

Another Indian web series that made to our list is F.L.A.M.E.S – A teenage romance from The Timeliners. The show aims straight from the heart. This web series is the story of a young romance unfolding as a chemical reaction. All seasons of F.L.A.M.E.S are available on TVF Play. You can watch them here.

The next web series on the list is Yeh Meri Family – a show full of sweet memories from childhood. Set in the summer of 1998, Yeh Meri Family is a story about different emotions towards family members from the eyes of a twelve-year-old, Harshu. Capturing the perfect vibe of the 90s, this series will leave you touched and smiling. You can watch it here.

Much before web series became a common (or rather, preferred) source of entertainment, Pitchers was the show that had the audience ditching the TV and looking to their laptops. It was entertaining, relatable, and fast-paced – elements that are crucial to the success of a limited web series. To date, we are waiting for another season to come out. You can watch it here.

Another great Indian web series that you can’t afford to miss Aspirants. It is the story of the journey of three UPSC (public service competitive exams in India) aspirants and their friendship against all odds. You can watch it here.

One of the best series, Manoj Bajpayee-starrer The Family Man had us hooked. A working man from the National Investigation Agency tries to protect the nation from terrorism, but he also needs to keep his family safe from his secret job. Unlike many other series, The Family Man did not disappoint the audience with Season 2 and kept them as engaged as they did during Season 1. You can watch it here.

Starring Jeetendra Kumar, this TVF series won many hearts with its simplicity. A comedy-drama, which captures the journey of an engineering graduate Abhishek, who for lack of a better job option joins as secretary of a Panchayat office in a remote village of Uttar Pradesh. You can watch it here.

This show is based on the Stories by Rabindranath Tagore which eventually aired on the EPIC channel and now it is available on Netlfix. It is directed by Anurag Bas. You can watch it here.

Indian classical singer Radhe and pop star Tamanna. Despite their contrasting personalities, the two set out together on a journey of self-discovery to see if opposites, though they might attract, can also adapt and go the long haul. You can watch it here.

A link in their past leads an honest cop to a fugitive gang leader, whose cryptic warning spurs the officer on a quest to save Mumbai from a cataclysm. You can watch it here.

The show that first introduced us to Mikesh and Tanya, presented the challenges of live-in, long-distance, and marriage. The funny and heart-warming love story captures how a couple, who were in a long-distance relationship for 3 years, face the prospect of getting married. You can watch it here.

Created by Neeraj Pandey, Special Ops started in a promising manner and largely stuck to the promise. Kay Kay Menon fit right into Himmat’s part and was easily the show-stealer here. The only con here, in our opinion, was the fact that the stakes were never just high enough for us to be concerned about the good guys in the finale. You can watch it here.

Divorced, jobless, hopeless. Three siblings plan a road trip together. Chandan, Chanchal & Chitvan. Together they start a hilarious journey, to find themselves and their relations. You can watch it here.

ALSO READ: 10 Feminist Movies About Strong Women Falling In Love With Themselves

Based on the Nirbhaya case, Delhi Crime follows the Delhi Police investigation into the finding of the men who perpetrated this crime. You can watch it here.

17. Asur: Welcome To Your Dark Side

A unique crime thriller that pits two opposing worlds against each other. The less explored, intricate world of forensic science and the deep mysticism of ancient Indian Mythology.

Kaafir is a 2019 Hindi web series directed by Sonam Nair. This is written by Bhavani Iyer and the series is made on a Kashmir Woman from Pakistan-administered Kashmir who comes on the Indian side of the Line-of-Control. This is a great show to watch and for your weekend.

A shockingly violent revenge drama, Mirzapur became much more than a tale of guns and curses because of its unexpected plot twists and fleshed-out characters. And while Pankaj Tripathi’s ability to nail a layered character was never in question, Ali Fazal and Divyendu Sharma’s performances were a pleasant surprise indeed. You can watch it here.

Far away from Bollywood’s song, dance, and melodramatic representation of romance was Kavya and Dhruv’s love story (and challenges) that shows life is all about little things. Over a course of three seasons, the show has continued to explore the challenges the two face as a couple while also focusing on their personal issues. You can watch it here.

It is the story of two wedding planners in Delhi, where tradition jostles with modern aspirations against the backdrop of big fat Indian weddings revealing many secrets and lies. You can watch it here.A

This series just asks one question – how far will you go to protect the one you love. Two desperate and driven men must engage in the ultimate cat and mouse game to save the one they love. You can watch it here.

Laakhon Mein Ek is a show about an average boy, Aakash, trying to get an extraordinary rank at an IIT coaching institute. Will he succeed or fail? You can watch it here.

Four blood-bound sisters with four passionate dreams, all yearning for one thing: fulfillment. This is a modern-day story of dreams, desires, love, war, and the eternal pursuit of happiness, set against the breathtaking beauty and unsettling unrest of Kashmir.

Next on the list of best Hindi web series is the family comedy – What The Folks. With hilarious instances and emotional scenarios, ‘What The Folks’ is a journey of modern Indian families breaking stereotypes. What sets the show apart is the topics it takes upon, which are relevant for most married couples (and even single adults) living in India. You can watch it here.

ALSO READ: 11 Feminist Dads Of Bollywood Who Prove We Can Find Heroes In Our Fathers

Another Indian web series on the list is Bang Baaja Baaraat – Two people from very different backgrounds fall in love and decide to get married, but not without their parent’s blessings. Three days before the wedding they introduce each other to their respective parents and all hell breaks loose.

Inside Edge is the story of the Mumbai Mavericks, a T20 cricket franchise playing in the Powerplay League. Set in a landscape of conflicting interests, where selfishness is almost a virtue, where sex, money, and power are mere means to an end, Inside Edge is a story that pulls no punches, minces no words, and takes no prisoners. It’s about the game behind the game. You can watch it here.

This Sushmita Sen-led series just did not waste any time in building up to the premise. This woman-led Indian web series just after the first episode makes it obvious that Aarya is binge-worthy. The layered characterization, Sushmita Sen’s screen presence, and the smart use of old Hindi film music also helped Aarya’s cause. You can watch it here.

This Jaideep Ahlawat-led series is another crime drama that deserves a spot here. A down-and-out cop lands the case of a lifetime when four suspects are nabbed in the assassination attempt of a journalist. This pursuit leads him to ‘Paatal Lok’, and to shocking discoveries in the past of the four suspects. You can watch it here.

F.A.T.H.E.R.S is a pleasantly refreshing take on the problem of the ‘generation gap’. It presents the story of three retired fathers, who get together and attempt to ‘become cool’ in an effort to connect with their millennial children. It takes a dig at all things millennial and is the kind of comedy you don’t mind revisiting. You can watch it here.

With Pushpavalli, Sumukhi Suresh delivered a masterpiece when it comes to the Indian web series. Because we had a show that broke the mold when it came to comedy, female leads, and romance. A black comedy helmed on the shoulders of a character (and actor) who was the polar opposite to Indian TV’s stereotypical female leads, Pushpavalli delivers on both, comedy and drama. You can watch it here.

Spandan Chukya knows Mumbai is the city where all your dreams come true. On his long journey from Meerut to Mumbai, he learns that every dream has a price, every choice has a consequence and every win comes from a sacrifice. You can watch it here.

In a totalitarian near-future India, a mysterious prisoner is sent to a remote military interrogation center where he turns the tables on his captors by exposing their most shameful secrets and unleashing a demon from Arabic folklore. You can watch it here.

Three engineering students deal with dorm drama, date around, and do whatever it takes to make their dreams come true. You can watch it here.

Four masked men break into the Anand family home, taking them hostage. Pushed into a do-or-die situation, Dr. Mira Anand, played by Tisca Chopra, has to make a choice. Will she take a life or save lives? You can watch it here.

Another Indian web series that touched the hearts of many is Masaba Masaba. Real-life mom-daughter duo Neena and Masaba Gupta play versions of themselves in this playful, fictional peek into their lives in fashion and film. You can watch it here.

Inmates is a comedy web series that stars Mukti Mohan, Akanksha Thakur, Kashyap Kapoor, Raghav Raj Kakkar, and Ashish Verma. This is a story of five friends who live together under one roof. These five close-knit 20-somethings maneuver the highs and lows of friendship, romantic entanglements, and finding themselves. You can watch it here.

Did your favorite Hindi web series make it to the list? Let us know in the comments section below.