In case you are tired of watching non-sensical Bollywood junk and looking for some intelligent and unconventional content, then here are 7 recent films and web series that you must give a try. These movies and web series from past years have won international accolades and made India proud. 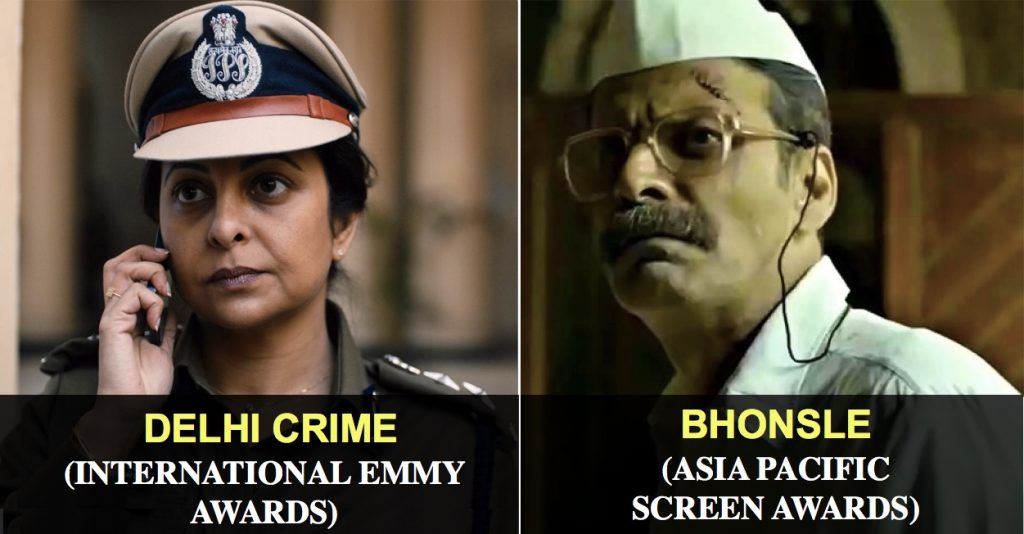 It is a big achievement to get noticed abroad. These selective movies and web series from recent times have not only bagged the nominations but also won prestigious international awards. How many of these shows and movies have you watched?

Starring Shefali Shah, Rasika Dugal, and Adil Hussain, this show is based on the 2012 Delhi gang-rape and murder case. This hard-hitting web series became the first Indian web series to win the best drama series at the 48th International Emmy Award. You can watch it on Netflix.

Amazon Prime Video’s The Family Man bagged four big awards at Asian Academy Creative Awards. Manoj Bajpayee, who plays the lead role in the show won Best Actor in a leading role category. The show also won the Best Series, the Best Director, and the Best Original Screenplay awards for the show. You can watch the show on Amazon Prime Video.

Adil Hussain won the Best Actor award at Indo-German film week in Berlin for his breathtaking performances in two films–  Pareeksha and Nirvana Inn The Film. In Pareeksha, Adil played the role of Buchchi – a rickshaw-puller. The film takes on the subject of Indian education and its shortcomings. You can watch this movie on Zee 5.

Thrilled to have received the Best Actor Award for the role of Buchchi Paswan in Pareeksha @Pareeksha2020 at the #IndoGermanFilmWeek in Berlin last night. Thank You for this recognition. I share this Award with dearest @prakashjha27. And of course with the entire team.

Chaitanya Tamhane’s The Disciple made history by becoming the first Indian film in 30 years to win at the Venice Film Festival. “We are all quite thrilled and excited with this fantastic start to the journey of The Disciple”, Tamhane was quoted as saying by PTI.

The Disciple is about a vocalist, who after devoting his life to the study of classical Indian music, begins to question whether he will ever achieve his aspirations of excellence. You can watch this movie on Netflix.

Congrats to Chaitanya Tamhane on winning Best Screenplay at the Venice Film Festival for THE DISCIPLE!

Radhika Apte received the Best Actress in the International Narrative Feature at the Tribeca festival.

MADLY explores six stories of modern love in all of its dizzying, sweet complications, culminating into one iconoclastic, feature-length anthology. The film takes a passionate trip around the world with Gael García Bernal, Sion Sono, Sebastián Silva, Mia Wasikowska, Anurag Kashyap, and Natasha Khan behind the camera for each 15-minute vignette. You can watch it on Youtube.

The #Tribeca2016 Award for Best Actress in an International Narrative Feature goes to… @Radhika_Apte in MADLY. pic.twitter.com/IM58HypvxD

Manoj Bajpayee is a terrific actor and Bhonsle is hailed as Manoj Bajpayee’s landmark performance. Though the movie remains to be one of the most underrated films of 2020, Bajpayee won Asia’s biggest acting award, the Asia Pacific Screen Award for it.

The movie is about a terminally-ill Maharashtrian cop Bhonsle, who retired against his will and finds himself forging an unlikely companionship with a 23-year-old North-Indian girl and her little brother. As the raging conflict destroying the world around them reaches Bhonsle’s doorstep, he preps for one last battle worth fighting for, but will we succeed? You can watch it on Sony Liv.

How many have you already watched? Let us know in the comments.