Netizens Want To Boycott Brahmastra For Multiple Reasons: Has Bollywood Lost Its Shine?

Recently, the trailer of Ranbir Kapoor and Alia Bhatt starrer Brahmastra was released. Being one of the most-hyped films of 2022, the movie is directed by Ayan Mukerji and produced by Dharma Productions along with Fox Star Studios. This fantasy drama also features Amitabh Bachchan, Nagarjuna, and Mouni Roy in key roles. And, as per various sources, even Shah Rukh Khan is doing a cameo in the movie.

With so many talented actors, one may assume that fans would be really excited to watch it. But, sadly, soon after the launch of Brahmastra trailer, #Boycott Brahmastra started trending on Twitter. And, what shocked us, even more, was that there were multiple reasons why netizens demanded that fellow social media users boycott the movie. 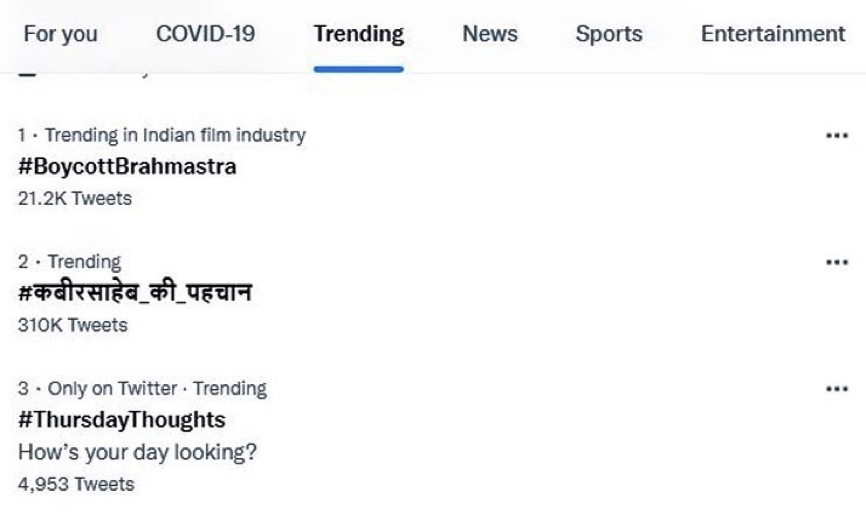 Brahmastra went on floors in 2018 but witnessed multiple delays. And, a few days back, finally, the makers unveiled its trailer after a long wait. But, soon after the trailer release, a section of social media users called for a movie boycott.

In case you haven’t watched it, here’s the trailer:

Sushant Singh Rajput fans on social media played an active role in trending “Boycott Brahmastra” on Twitter calling the lead stars Ranbir and Alia “worthless nepo kids”. The other reason behind the boycott demand was a temple scene from the trailer in which Ranbir is seen in slippers. And, another reason is Karan Johar’s promotion of nepotism in Bollywood. Some did share how they don’t want to support Bollywood for its rampant use of drugs.

Here are the reactions:

We won’t forget what they did to Multi talented Sushant Singh Rajput.

CBI Do Justice To Sushant

Why did Karan Johar release the trailer of his film on 15th June but full promotion from 14th? Could have chosen any other day. Is it to mock SUSHANT? He kept insulting him when he was alive but that still hasn’t quenched this thirst it seems.#BoycottBrahmastra #Brahmastra

Thinking nationalists will support them, now Bollywood has started making films on Hinduism

The latest addition is Brahmastra

This is Bollywood for you, it never respects Hindu sentiments! pic.twitter.com/vjAHTy7cPg

Wearing shoes and hitting the ghanta of the temple in recent movie brahmastra is unacceptable. we have never seen demeaning of hindu culture n values in movies made in southern languages of India #BoycottBrahmastra #BoycottBrahmastraMovie pic.twitter.com/ypofel8hX7

Hero of the movie wearing shoes inside the Temple ..just the movie we all needed !!!! #Brahmastra #BoycottBollywood pic.twitter.com/xISG2erqyX

#BoycottBollywood #BoycottLaalSinghChaddha #BoycottBrahmastra #Brahmastra Tell your neighbors, friends, relatives and advise them to tell more to not watch trashy Bollywood. Give money to poor or educate an orphan. Do not pay bollywood mafia.

In #BrahmastraTrailer nepokid #RanbirKapoor is shown wearing shoes and ringing a Bell in Temple, Bollywood never miss a chance to insult Hinduism. @GemsOfBollywood

The moment I watched the #Brahmāstra trailer I knew Ranbir Kapoor’s shoes would become a bigger talking point than all the VFX on display.

Filmmakers need to be conscious about such things. I wonder how that thought never occurred to anyone in the Dharma team.

One basic etiquette, which every Hindu knows is that you don’t enter the temple with shoes on your feet.

The trailer overall was OK. But this “shoe” point should have been taken care of in my opinion.#Brahmastra #BrahmastraTrailer pic.twitter.com/NtMsgqOPTu

For the unversed, the big-budget Brahmastra will hit the theatres on September 9. Is boycotting Brahmastra just another Twitter trend or has Bollywood actually lost its sheen and charm? What do you think? Let us know in the comments below.