I’m Married. But Still Feels Like A Single Mom With My Husband: Ugly Reality Of Many Moms

In a patriarchal country like ours, where women and young girls don’t feel safe walking alone, Farhan Akhtar shared his fear and hope that every parent of a daughter will relate to! 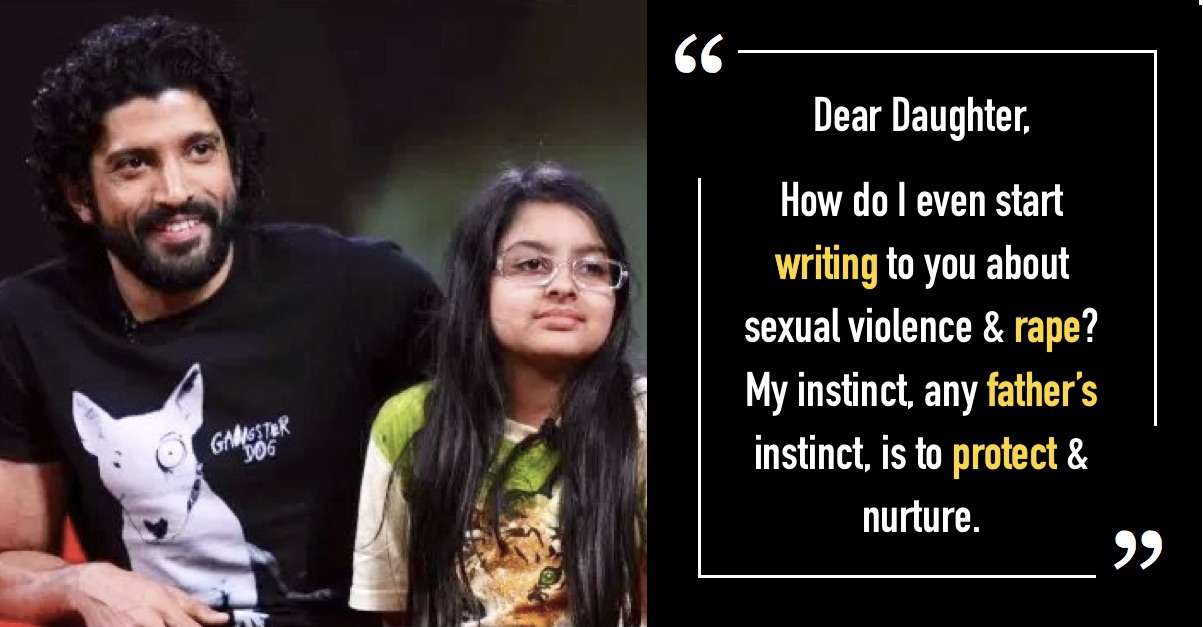 Published a couple of years back, in his thought-provoking letter about sexual violence and rape, the leading actor mentioned:

How do I even start writing to you about sexual violence and rape? My instinct, any father’s instinct, is to protect and nurture, but it is an issue that we must confront and discuss. Let me start, dear child, by quoting from a poem I wrote after the brutal murder of a sprightly lawyer in my team in 2013. You were too young then, only 12, and all I wanted was to see you smile and feel brave and invincible like you did. The attempted rape and murder was too dark a subject for me to bring up then.

Now, you’re 16 and I can read the questions in your mind. Yes, the same questions that I find myself asking:

What is this country that I live in?

That takes away her right to love

Brutalizes her with an iron glove

Rapes her without fear

of there being justice for her tear…

…what do I tell my daughter?

That she’s growing up to be lamb for the slaughter

we’ve got to make a change

and never give in

no matter how much our head may spin

What is this country that I live in?”

Further sharing how some parents are trying  hard to make our society better for women and daughters.

“I know your head spins. I know your young mind grapples with how we treat our women. We’ve tried, as parents should do, of teaching you the importance of equality, of never ever making a distinction between boys and girls, of introducing you to the concept of choice; of even talking to you about ‘good touch’ and ‘bad touch’. We have open conversations.”

While sharing the dilemma of every parent, who feel helpless while putting restrictions on their daughters for sake of keeping them safe, he mentions:

“I know too, from your Facebook posts, that as you spread your wings to fly into this world, you are troubled and annoyed. Why can’t I wear what I want to wear? Why can’t I pick my identity? Why can’t I be free in the true sense of the word free?

Yet, as a father, I can’t put my head in the sand because there are certain realities around us. We live in an unsafe, largely unequal world.”

Not shying away from how the movies in our country objectify women and add to the problem, he adds:

“As an industry, we are guilty of normalizing the invasion of a woman’s space, the woman’s body. Those watching our movies think it is ‘normal’ to harass a college or a village girl even when the girl is saying she’s not interested.

Such behavior — which flies in the face of consent that I’ve always tried to talk to you about — has been normalized by movies. Stalking, unfortunately, has become a mutated form of cinematic romance.

As a filmmaker, I need to be wary of such visualization. We can’t put a blindfold around our eyes and say, I’m doing this for entertainment, or believe that it has no influence on the audiences.”

Adding to the topic of Rape and sexual harassment in movies, he adds:

“Rape and sexual harassment have often figured in movies. Earlier, the ‘bad guy’ was always the villain but think about it, the villain who used to be the stalker in college, for example, has now been replaced by the hero. Step back and see and what you’ll realise is that the creep you hated in movies is the one who is ‘getting’ the girl. Worse, the girl ends up believing that he’s stalking her because he loves her and she ends up thinking, ‘he must really love me’.

In the end, like any progressive parent, Farhan Akhtar shares:

“I do worry about you when you’re out as any father would do. But like all fathers, I want you to remember that through your journey in life, you have a friend in me. You must always chase your dreams and live your life with freedom. Of course, be safe. You know what safe is. Have your wits about you. Be smart and be in control of yourself.”

And as you ask yourself the question, what is this country that I live in, always remember:

I understand you little girl

Your rage, your surprise

Your confusion about the beast in human disguise