With changing times, our traditions of Indian marriages are evolving too. It is quite impressive how our young generation is adding a personal touch to marriage rituals and traditions. They are doing things their way and we are loving it.

Recently, a wedding video went viral on Instagram for a heart-warming reason. This marriage not only amazed the guests but also the netizens. In this viral video, one can see the bride and groom signing a special contract paper as a part of the marriage ritual. As the couple is surrounded by friends and family, the bride asks the groom to sign an unconventional contract.

The contract captured beautiful and heartwarming conditions. As captured in the video, the contract agreement included the following conditions that the groom had to fulfil to keep the bride happy. 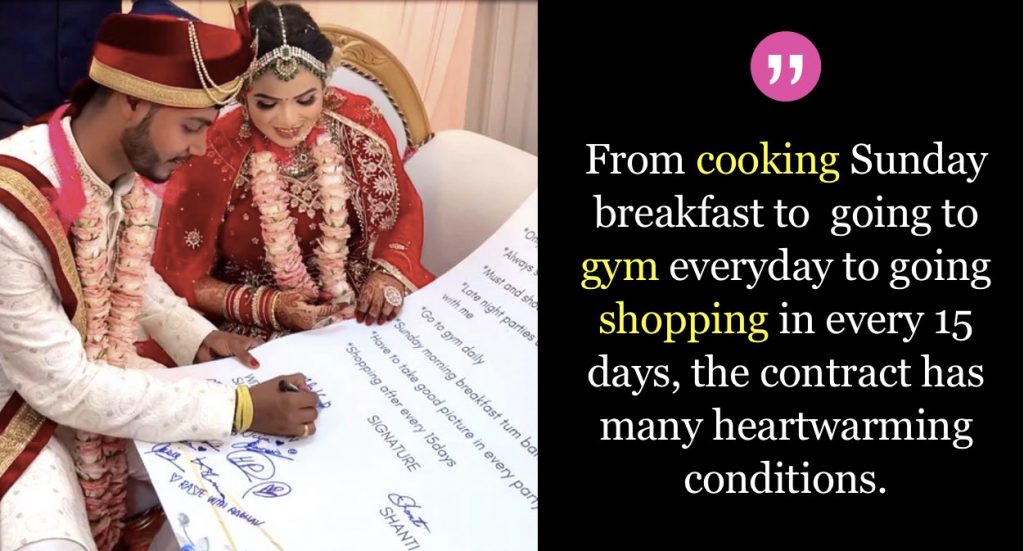 The first condition is only one pizza in a month. The next is saying yes to Home-cooked food. As a next condition, the bride promised to wear a saree every day. The other conditions included: Late night parties are allowed but only with the bride; Going to the gym daily; Husband to make Sunday breakfast; Taking good pictures at every party and going shopping after every 15 days.

This video has gone viral as almost 2 million people have already liked the video. Here’s the video:

There were many Instagram users, who came forward to express their views on the video. While many really loved the idea, some did not. One Instagram user wrote, “All conditions are ok. But everyday saree is toooooooo much…” The other one said, “ Merko bi esa marriage contract chaiye!”. While some felt that it was a great deal, some felt that pizza once a month isn’t fair. Another user wrote, “Banta h yr itna to uski khuwaish h”.

At IFORHER, we wish the couple a lot of love and luck. Hope their marriage is full of love, care, dignity and respect. What do you think about this marriage contract? Tell us in the comments below!