Here are some such supporting characters who easily overshadowed the main leads: 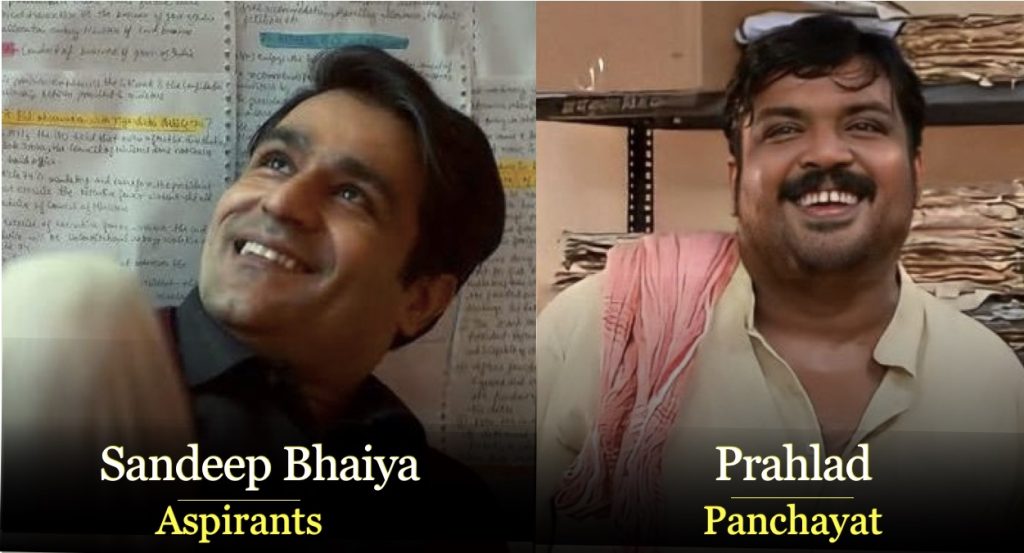 1. Vikas and Prahlad from Panchayat

Panchayat was one show, where every supporting character was really well-crafted. Remember how there were scenes where Vikas and Prahlad could effortlessly carried a scene without the presence of the main protagonist. While everyone in Panchayat gave powerful performances, both Vikas (Chandan Roy) and Prahlad (Faisal Malik) left a lasting impression. Be it Vikas’s funny one-liners or Prahlad’s heart-wrenching climax scene, these two characters created their own place in our hearts.

While Jeetu Bhaiya from Kota factory may have his fanbase but Balmukund Meena has his own dedicated fan following. Meena – an unconventional character of an innocent and nerdy guy is so well-portrayed by Ranjan Raj.

Neena Gupta’s talent needs no words. And, when she played herself in the series Masaba Masaba, which is based on the life of her daughter, designer Masaba Gupta, she was as dynamic and fascinating as she is in real life.

4. SK and Sandeep Bhaiya from Aspirants

Though Abhilash was the leading character, the audience showered their love on SK and Sandeep Bhaiya. These supporting characters are so beautifully written that they easily managed to steal the show from the lead characters. It’s amazing how they brighten up every scene they’re in.

6. Bunty and Katekar from Sacred Games

Sacred Games was a great hit among the audience when it was first aired. It featured some great characters. And two brilliant actors, who stood out in the series were Jatin Sarna and Jitendra Joshi. With their flawless performances, these actors made the character of Bunty and Constable Katekar immortal.

While we adored Aarya (Sushmita Sen), another character that caught our attention was Jawahar – a businessman who is involved in illegal activities. This character is really fascinating as it has several layers of complexity. Played by talented actor Namit Das, this character leaves a lasting impression.

8. JK Talpade and Chellam Sir from The Family Man

Sharib Hashmi, touched so many hearts as he portrayed the role of JK Talpade, who is a great colleague, confidante and true friend to Srikant. He made many of us wish for a friend like him.

And, how could we forget Chellam Sir (Uday Mahesh) in The Family Man 2. The character of Chellam sir captivated fans’ minds so much that many requested the makers to give us a special spin-off series starring Chellam Sir as a lead!

What are the supporting characters that you love as much as the lead characters? Tell us in the comments below.