Bhool Bhulaiyaa 2, featuring Tabu, Kartik Aaryan, and Kiara Advani, has turned out to be a blockbuster at the box office. Anees Bazmee’s spirited sequel to Akshay Kumar and Vidya Balan’s 2007 hit Bhool Bhulaiyaa has crossed the Rs 180 crore mark domestically despite its premiere on Netflix.

In a viral thread on Reddit, many asked that while the producer gifted an expensive car to Kartik Aaryan, what about Tabu? Many felt Tabu deserves more credit than Kartik for the success of the movie. They felt that Tabu saved the sinking film that lacked substance. 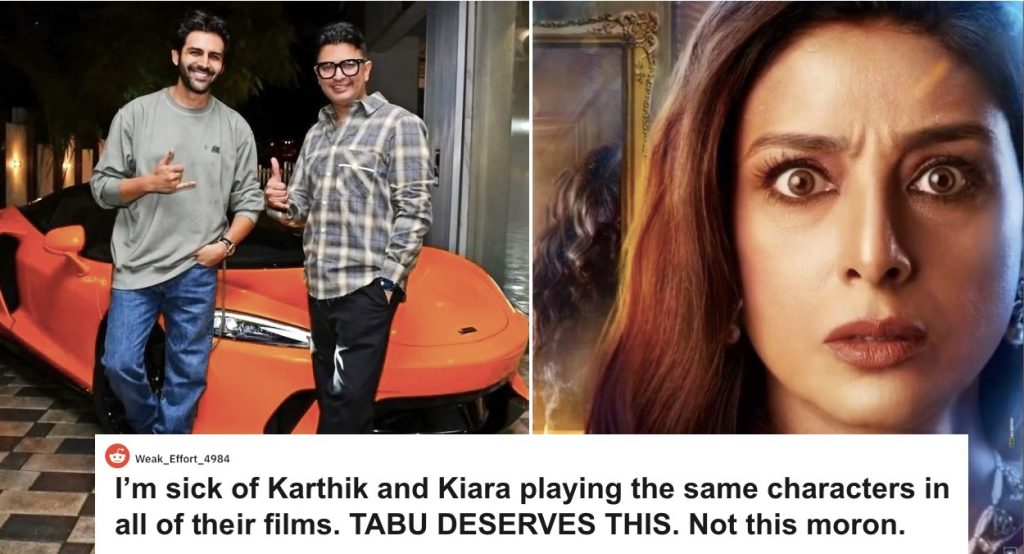 Here’s what people had to say about it:

“Should’ve given one to Tabu too. She carried the film.” – Raumdeuter_TM25 “I’m also thinking what gift did tabu get?” – Super_Nobody_1939 “I haven’t watched the movie yet, but almost everyone is praising Tabu more than Kartik. Did she get gift as well?” – SandhuG “Movies is carried by Tabu. Jokes are terrible in this movie. jokes seem like written by some cringe youtuber like elvish and Ashish chanclani. For example “bag mein bomb nhi,bomb ka bag hai” – PRBOTISMYCOUNTRY

“Male actors ko car, aur female actors ko compromise” mature Bhusan probably” – raamlal “I really didn’t think the comments were making it a gender issue (correct me if i am wrong) – it’s more about the talent of the actors and their experience. The movie was honestly just okay imo, but Tabu’s acting was far better than Kartik’s.” – chunkyyeti “I was thinking where is Tabu’s car?” –Shamila1

“Same here the heavy lifting was done by her, Rajpal Yadav, Sanjay Mishra and Ashwini Kalsekar.” – tanu2995 “Tabu should be given this car, as the Anjulika -Manjulika subplot was the only entertaining part of the film and I daresay, was responsible for the blockbuster success of the film. Kartik was just his usual buffoon self, similar to Luka Chuppi.” – OnlineGranny007

“What about Tabu, Rajpal Yadav, Sanjay Mishra and Ashwini.” – tanu2995 “I’m sick of Karthik and Kiara playing the same characters in all of their films. TABU DESERVES THIS. Not this moron.” – Weak_Effort_4984 “Well if karthik got car Tabu should atleast get a chopper” – Comfortable_Kick_330 “And where is the car for Tabu??? These people will never get it right.” – Shivampa “What was so great about this film tho? It was terrible. I continued to watch solely for Tabu & Rajpal Yadav.” – chasingchz

Like many over the Internet, we don’t mind the producer gifting a car to Kartik Aaryan for the movie’s success. But, we would love if the same gesture is extended to other deserving candidates like Tabu & Rajpal Yadav. What do you think? Tell us in the comments below.