It is quite heartbreaking when your loved celeb makes a stupid and tone-deaf statement and leaves you disappointed. From Kareena Kapoor to Alia Bhatt to Arjun Kapoor many have been criticized for making arrogant statements that left many disgusted.

Recently, a video clip of an old episode of Karan Johar’s chat show Koffee with Karan went viral. This episode welcomed Kajol along with her cousin Ayan Mukherji as guests. The viral clip is about Kajol making a tone-deaf statement about how her ring could buy how many people over. She further adds how she looks rich despite the fact she wore Ghaghra Choli in the movie.

The statement left many netizens disgusted and they called her out for her “self-elevation opinion of herself”. 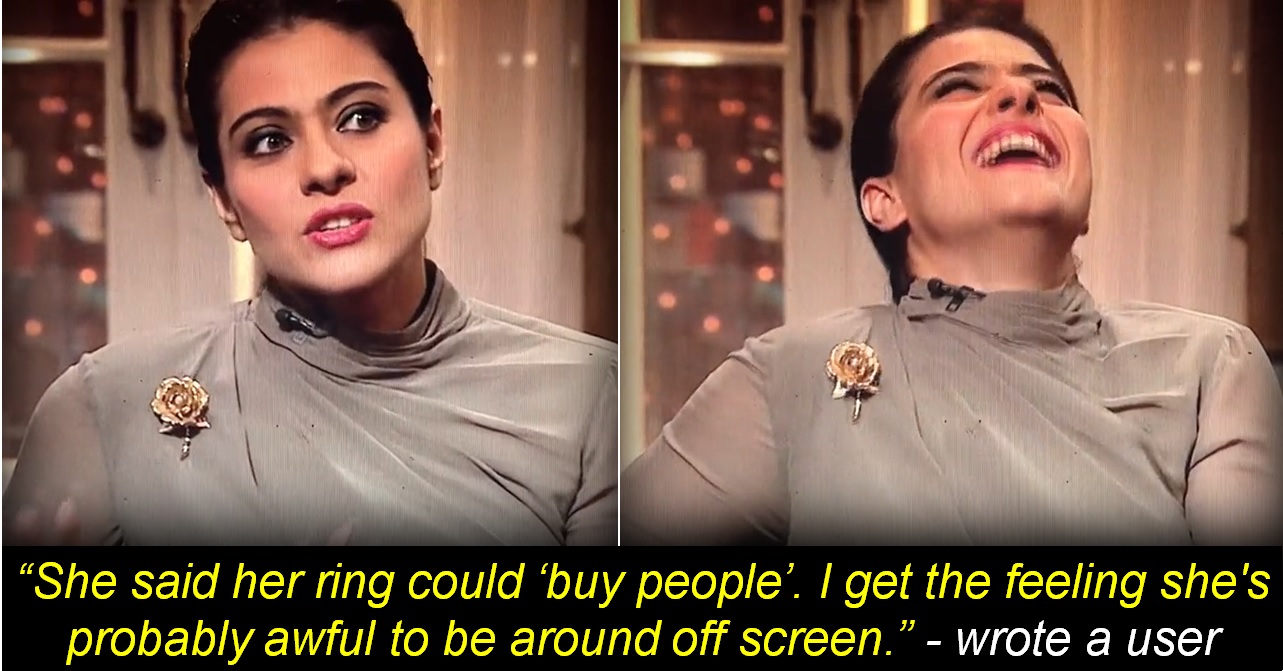 The whole discussion happened when Karan asked Kajol, “Any kind of criticism if at all, which has been very rare in your case, that has been hurled at you, has been that you have not been experimental with your parts. That, you know, you do roles that are in your comfort territory.” To which Kajol interrupts him and says “I agree with that, totally.”

Karan further adds, “We have never seen you play this village belle”. In its response, Kajol says, “You know I decided very early on that I just look rich”. She laughs off as she adds, “I don’t look poor. Whatever I do at the end of the day, even if I’m wearing a Ghaghra Choli at one point of time, which I was wearing in Hulchul. I looked at myself and said, ‘You know, I don’t look poor from any… I don’t look with my rings and my this thing and my Om ring that could probably buy god knows how many people over… houses over…”. 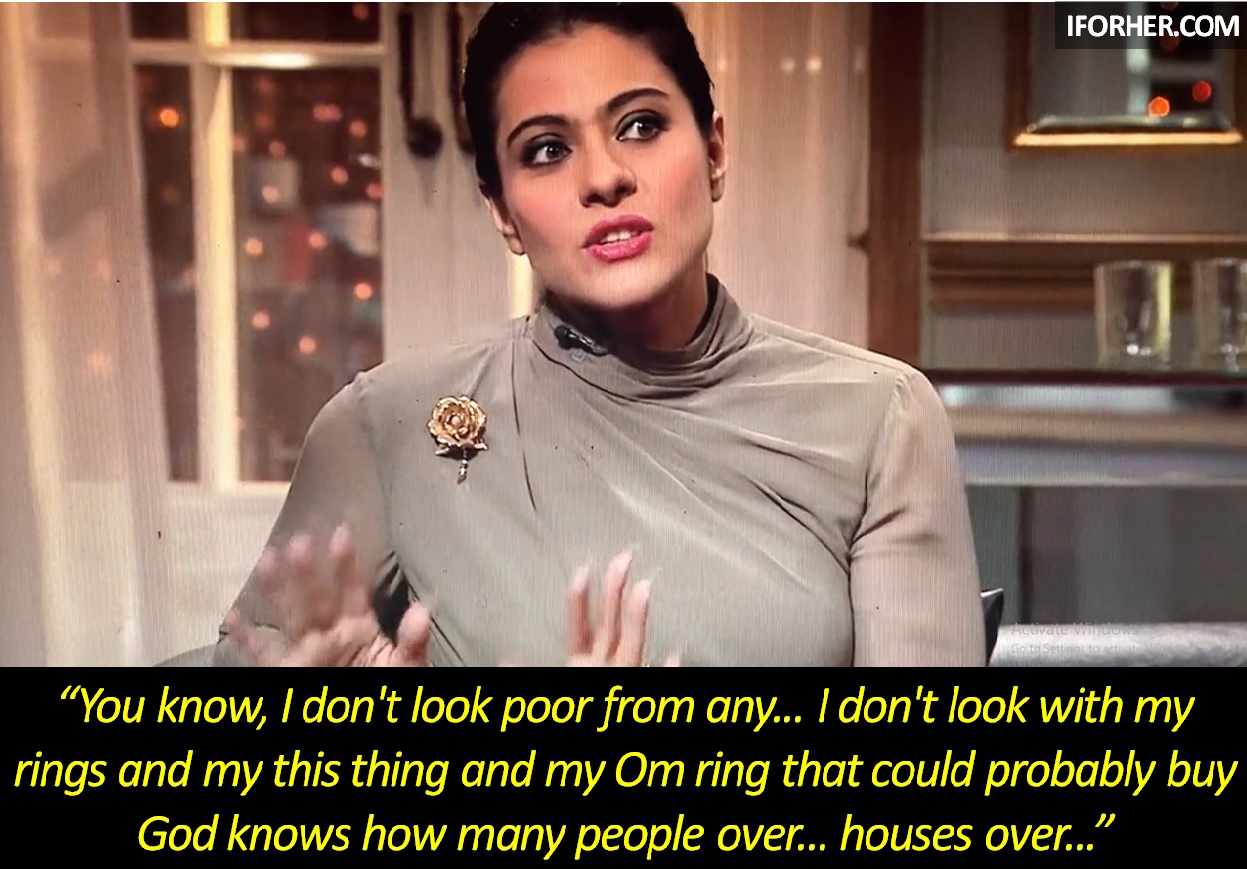 After Kajol laughs at her own insensitive statement, Karan tells her, “Kajol, I think you’re quite wrong. I think you have a self-elevation opinion of yourself.” She laughs even louder.

Here’s the video clip that was shared on Reddit:

Reacting to Kajol’s problematic statement, many netizens came forward and shared their disgust.

“This particular statement of hers was really annoying. Thank you, OP for catching this. She’s really crass and tries so hard to appear rich and snooty. Key word is tries. She is quite tone deaf. It’s just a diamond ring Kajol. Get over yourself,” netizen commented. “So obnoxious,”, wrote another. One wrote, “Goes on to buy chindi stuff from Amazon as told by her husband Zuban Kesari in another KWK episode.”Another person pointed out, “I agree with karan. She definitely has a self elevation opinion of herself. Also ghagra choli is something rich people also wear…… so I don’t get her point.” “Husband – zuban kesari Wife – zuban tatti,” read another comment.

Here are some more reactions: 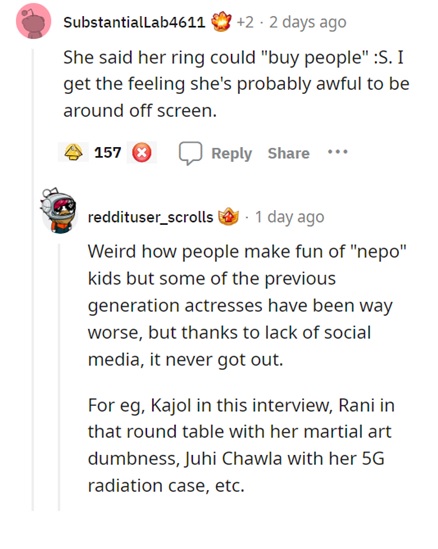 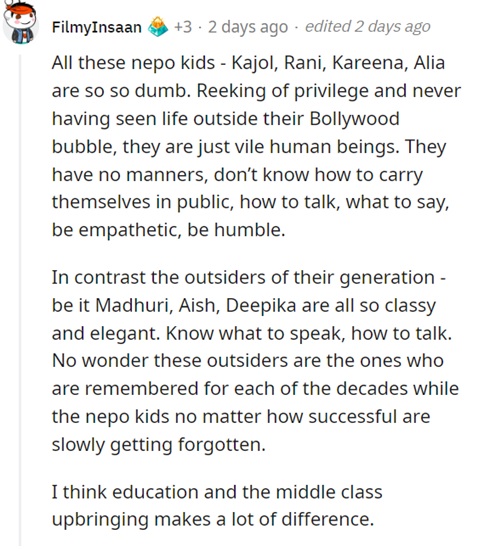 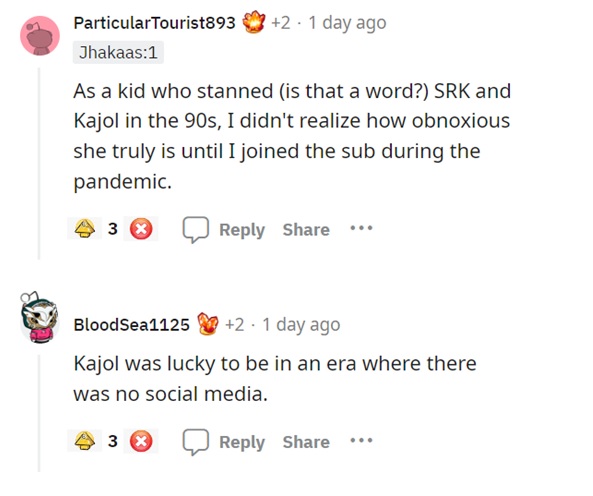