25 Best Comedy Movies On Netflix That Are Super Funny

Best Netflix comedy movies are thankfully here to cheer us up. This fantastic collection of hilarious comedies from all over the globe are super-funny and we are sure you will enjoy watching them as much as we did. Enjoy!

Seeking some giggles from the couch? We got your back! Let’s be real; we all need a hearty giggle occasionally. Netflix comedy movies thankfully is a fantastic collection of hilarious comedies from all over the globe. To assist you in finding your upcoming streaming option, we’ve gathered the finest. And, we’ve made sure to include choices for people of all ages and preferences considering comedy covers a wide range of topics. 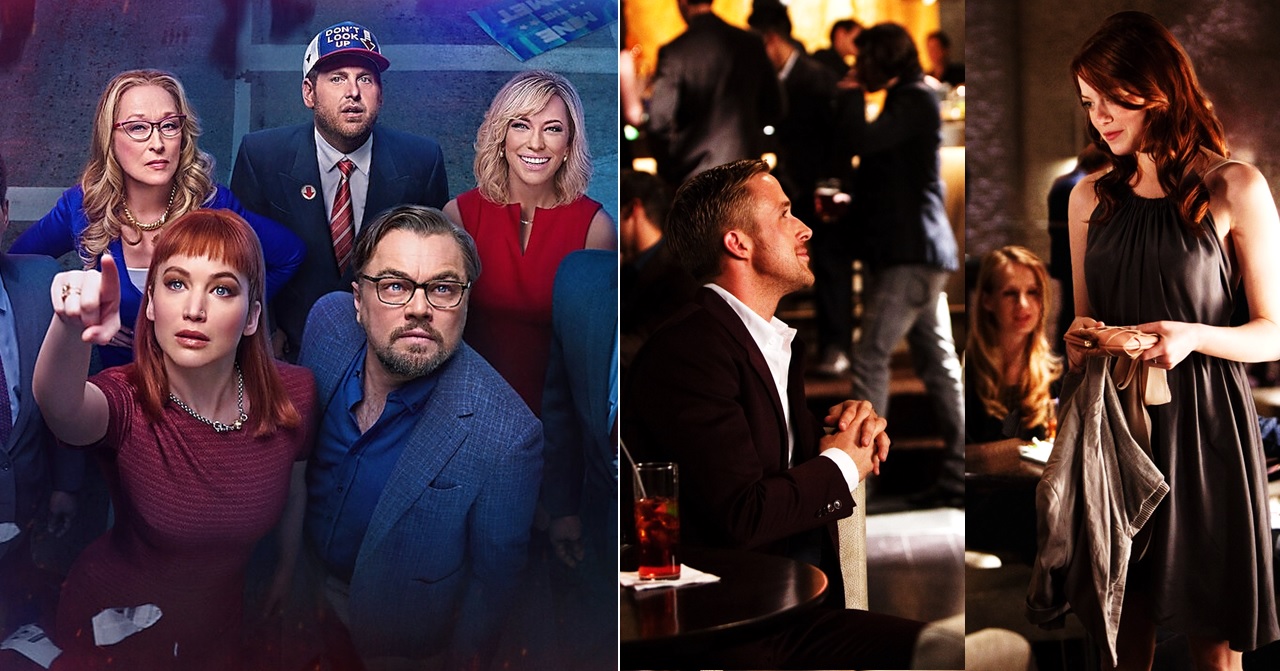 The two graduate from the University of Chicago, Sally offers Harry a ride to New York, where they eventually cross paths. The story swings between their lives as they repeatedly ran into one another while searching for love. In due course of time, they develop a friendly relationship, and are extremely happy to have a friend of the opposite gender. But, they soon run into a dilemma whether or not sex can prevent a man and a woman from being friends.

Matthew Broderick plays a lovable slacker in John Hughes’ classic adolescent comedy. Ferris Bueller’s Day Off, in which Mia Sara and Alan Ruck also appear, also functions as a sort of travelogue for Chicago. Since 2014, it has been conserved by the National Film Registry.

Ensemble satire by Adam McKay has ambition, excellent performances, and plenty of belly laughs. It’s too gloomy and gloomy — at times even crudely put together. When done well, dark humor has a lot of potentials, yet this genre sometimes results in an unpleasant, strident watching experience that is difficult to completely explain. As a pariah no one believes in, Jennifer Lawrence is as clever and empathetic as always, yet the part is weirdly underdeveloped (Leonardo DiCaprio’s is the most substantial). But, still many people believe that seeing the A-list actors in this movie riff off of each other is worth the time!

The nasty teen comedy by scriptwriter Tina Fey and director Mark Waters was indeed a critical and financial success in 2004.  And, its fan base has grown ever since. Heathers-lite (it doesn’t go as deep as the 1988 classic it pulls from), but it’s adored for a reason as the tale of an uncool outsider (Lindsay Lohan) negotiating her high school’s most vicious clique.

One of the super fun Netflix comedy movies, this film is a hilarious, shaggy comedy about a secretly attractive FBI agent who infiltrates a beauty contest that is the target of a criminal plot. The movie is powered by an important and wonderful Sandra Bullock performance. After a half-decade, a less commercially successful sequel that received negative reviews was released.

Look no further if you’re interested in learning how Thor: Ragnarok director Taika Waititi, from New Zealand, rose to the top of Hollywood’s list of notable directors so quickly. In this hysterically entertaining comedic adventure, Julian Dennison and Sam Neill play a son and father figure pair who become the object of a large search in the New Zealand wilderness. This is a jewel that is generally family-friendly and you simply can’t miss it.

A Netflix Christmas rom-com is usually everyone’s favorite. In this Christmas movie, Emma Roberts and Hacksaw Ridge heartthrob Luke Bracey play lonely singles who agree to be platonic plus ones for a year… only to fall in love along the way. It is more risqué and star-studded than past movies of its kind. Sappy? Sure. Also enjoyable at any time of the year, especially holidays.

The main attraction in this comedy-drama a semi-autobiographical look at writer/director Chris Kelly’s family life, is a superb tragicomic performance from Molly Shannon. Shannon received the Independent Spirit Award for Best Supporting Actress for her performance in ‘Other People’.

The emotional juggernaut directed by Noah Baumbach features career-best performances from Scarlett Johansson and Adam Driver. This epic divorce tale is a special sort of film that can make you laugh uncontrollably and cry uncontrollably in the same scene. For her portrayal of an L.A. power lawyer wearing jeans so tight you can see bone and then feigning remorse for appearing like a slob, Laura Dern received an Oscar for the best Supporting Actress. Perfect. Brilliant. Got it right.

This Netflix original film stars Daniel Doheny as Alex Truelove, a deeply closeted high school senior who loves his girlfriend Claire (Madeline Weinstein) but overcomes with confusion when he falls for a handsome, comfortable boy named Elliot. The film is at once joyful, raunchy, and disarmingly poignant.

Not Another Teen Comedy, featuring a devoted Chris Evans who appeared before the Avengers, is one of the better spoof farces of the turn of the century. It is a pale imitation of legendary films like Pretty in Pink and Never Been Kissed. It is categorized as Ras, vulgar, and occasionally hysterically funny.

In Nancy Meyers’ romantic comedy about a renowned screenwriter, who falls for a music magnate undergoing a spiritual makeover, Diane Keaton garnered an Oscar nomination (and she also won a Golden Globe). As the sensitive younger love interest vying for Keaton’s affection against Jack Nicholson, Keanu Reeves is wonderfully cast. So, did she ultimately make the correct decision?

Despite a clichéd plot about rekindling passion, rediscovering manhood, and other such themes, Steve Carell and Julianne Moore’s funny, mature performances as a married couple on the rocks mainly triumph. The outstanding chemistry of co-stars Ryan Gosling and Emma Stone, which was harnessed to perfection in the musical drama La La Land five years later, steals the show.

The  romantic comedy that McG co-produced, stars Nina Dobrev, Jimmy O. Yang, Darren Barnet, Matty Finochio, James Saito, and Harry Shum Jr.. The movie is about a young woman who flies 3,000 miles to see a match she made on a dating app only to learn she’s been catfished. Directed by Hernán Jiménez, this movie is definitely an entertainer.

One of the most heartwarming romantic Netflix comedy movies starring co-writers Ali Wong and Randall Park is all about old friends who get back together after a failed romance. Keanu Reeves, who is portraying himself, steals every scene he is in with his fluid and agile performance.

Reese Witherspoon had already established herself as the undisputed king of the romantic comedy by the time Legally Blonde and Sweet Home Alabama came out in 2005. Just like Heaven is a fantasy rom-com that explores the spiritual world and is based on the Marc Levy book ‘If Only It Were True.’ The film succeeds despite taking a flashy approach to some serious subjects because of the chemistry between Witherspoon and Mark Ruffalo before he became the Hulk.

Comedians from the past, this cutting-edge, bold British satire – Monty Python’s pinnacle work – retains all of its venom 40 years later. It is widely regarded as a serious contender for the title of greatest British comedy film of all time.

In the third installment of the stoner trilogy, which comes after Harold & Kumar Go to White Castle and Harold & Kumar Escape from Guantanamo Bay, former pals Harold (John Cho) and Kumar (Kal Penn) meet while looking for a Christmas tree. Naturally, Neil Patrick Harris is a co-star. A Very Harold and Kumar Christmas, the first movie in the franchise to include 3D technology, was released two years after Avatar became the most successful picture ever and rekindled a theatrical frenzy.

In this wonderfully risk-taking mix of written comedy and hidden-camera pranks, two friends embark on a road trip to New York. Before being purchased by Netflix, the film Bad Trip was delayed, unintentionally released, and digitally pirated. Since its contentious release window, it has acquired a sizable fan base and received favorable reviews.

The year 1994 was the one in which Jim Carrey’s career genuinely changed the course of Hollywood. The virtuoso comic co-starred with Jeff Daniels in the Farrelly Brothers’ irreverent comedy classic about two losers who trip across the US while unintentionally becoming involved in a ransom conspiracy.

A road-tripping family must defend one another and the entire Earth against advancing technology in Michael Rianda’s animated sci-fi comedy, a breakout critical and financial success of the pandemic period. At the 94th Academy Awards, The Mitchells vs. the Machines received a nomination for Best Animated Feature. The movie has received praise for including Katie, an LGBTQ character, in a sympathetic and uplifting way (voice of Abbi Jacobson).

This constantly quotable, tight-knit parody of King Arthur’s search for the Holy Grail is another high point for Monty Python. The Best in Film: The Greatest Movies of Our Time program was hosted by Tom Bergeron and Cynthia McFadden in 2011. People and ABC News worked together on this project to let moviegoers vote for their all-time favorites. After Airplane! Monty Python and the Holy Grail was ranked as the second-best comedy of all time.

Which one is your favorite? Tell us in the comments below.